By this point in the story, we’ve been introduced to two of our primary players (the third will be showing up at the end of this next act), and we’ve gotten our feet a little wet with the combat system.

I should probably talk about combat, since the system in place here really doesn’t remind me of any other game of the time (I can see elements of the system being incorporated into later games, even in Dragon Age: Inquisition‘s Focus attacks, but as a whole Chrono Cross‘s combat still remains pretty unique in my mind). 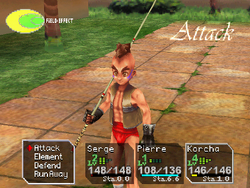 Ignore the guy wielding a fishing pole and a speedo and just note the stamina bars and element grids that are partially charged for all the characters. Basic battleflow is attack -> cast elements -> move to new character and repeat. (Image credit: Chronopedia)

You start any given battle with your entire party having full stamina.  Your characters can attack in any order, but every attack they attempt consumes a piece of their stamina bar (attacks are graded from light, costing one stamina point, to fierce, costing three) and every hit they land increases their accuracy for follow up hits until the chain gets broken by an enemy’s attack (stronger attacks are typically less accurate, and the common wisdom is to chain from light attacks to fierce in order to boost your accuracy on those harder hits).  At the same time you’re attacking, every hit builds power on your character’s element grid.  This is the part that’s viewed with mixed feelings.  On the one hand, this is a very different kind of magic system from what was typically done in console RPGs at the time.  Instead of having magic points that they consume to cast spells they innately know, each of your characters has an empty grid that can be customized with whatever abilities you’ve acquired throughout the game (the idea of collecting spells like items wasn’t totally new; Square did something similar in Final Fantasy VIII; coincidentally, that game’s magic system also receives much criticism, though in that case it had more to do with the way spell collection was tied directly to character stats, which made players reluctant to actually spend the magic they had earned).  Each character has an innate color, which makes them more proficient with abilities of matching colors and less with abilities of opposite colors, but any character can use any ability in the game (with the rare exception of summoning spells).

So far, things aren’t too out there.

The twist that I think confounded most people was the fact that while your abilities can never be used up (unless they’re specifically noted as consumable elements), they can only be used once per battle.  Enemies, naturally, have no such constraints, and will use their special attacks endlessly.  This creates a scenario where every fight is something of a race against the clock, where you’re trying to kill the enemy party before you run out of elements on your characters’ grids (keep in mind that there is no item system in Chrono Cross, so you can’t keep yourself afloat by relying on healing items unless you plan to sacrifice spell slots to equip consumable elements).  Add in the fact that you also can’t grind levels to beat difficult fights (character levels are replaced with ‘growth levels’ that only get unlocked for your entire party by defeating bosses), and this magic system can be pretty frustrating.

There are several anti-frustration features built in to help overcome the learning curve, fortunately.  The designers saw fit to make it so you can always retreat from fights (even bosses) and reconsider your tactics or tweak your element setup, and the end of every fight gives you to option to heal using any unused healing elements from the battle (which means if you plan accordingly, you can always get free healing after every encounter).  Besides that, even regular encounters can be entertaining since there’s no reason to hold your more powerful spells in reserve (unless you’re doing a New Game + playthrough and want to finish battles quickly; at that point it really is more time efficient to beat enemies to death).

Overall, I think the combat system in Chrono Cross is pretty entertaining, though it has some major flaws that probably limited its popularity.  I mean, it’s essentially a modified version of the spell slot system that originated with the earlier editions of Dungeons & Dragons (anyone who’s played one of the earlier versions of Final Fantasy will recall how well that system translates to a game where encounters are randomly generated and healing items are severely limited).

Anyhow, next time I’ll get into Serge and Kid’s misadventures sneaking into Viper Manor.