Harle’s departure is a pretty significant turning point in the story, although that doesn’t really become apparent for a while yet.  In the short term, it’s important to remember that Harle has a crush on Serge, but has also sworn to serve Lynx (or at least his body), and the meeting with Dark Serge and Kid at Hermit’s Hideaway has pushed circumstances to a point where Lynx needs to enter the Sea of Eden, Another World’s version of the Dead Sea. 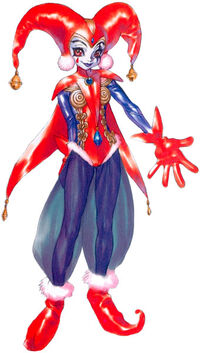 Out of all the sad characters in Chrono Cross, Harle strikes me as the saddest. (Image credit: Chronopedia)

The only problem with that is that only Serge can enter the Sea of Eden for unexplained reasons, so we’re about to embark on the quest to finally restore the protagonist to his proper body.  I suspect it’s this necessary shift, where Lynx has to become Serge again after spending a pretty hefty portion of the game getting comfortable in his new body, that prompts Harle’s departure.  Yes, there are other, more complex reasons that we don’t know about yet, but on the interpersonal level, I think Harle realizes that she’s about to lose Lynx and she doesn’t want to be around to see that.  The scene where Harle explains that you have to seek the blessings of the Dragon Gods includes a moment where she asks who you would choose if it came down to her or the rest of the world.

This is an odd moment simply because it’s one of those false choices that don’t actually impact the story in any way.  You can take the heroic answer and say you’d choose the world (perhaps you just don’t like Harle that much; it’s understandable, since the majority of characters get so little development throughout the story), or you can say that you would absolutely choose Harle.  Here’s where you can tell that the game’s not quite able to handle the weight of the choice it’s offering the player; Harle thanks you for lying to her, completely precluding the possibility of following a narrative where Serge decides to forsake his journey.  This is in spite of the fact that up to this pretty late point in the game, we still haven’t been given a compelling reason for trying to stop Dark Serge from doing whatever it is he’s doing (there is the whole complication of needing to save Kid, but let’s be honest for a moment and acknowledge that Kid has that classic personality type of being too stupid for her own good in most of the situations where we’ve encountered her in this story).

Harle’s last farewell is a quiet scene on the deck of the S.S. Invincible (we just can’t get away from that friggin’ ship) where she explains sadness to Starky (or some other equally naive character that’s been recruited by this point, I’m assuming).  It’s a good moment, and one of the reasons that I like Harle as a character.

The next several hours are extremely light on story, because all you’re doing is traveling around the worlds looking for the six Dragon Gods so you can challenge them to fights in order to gain their blessings.  At the same time you may also be working on a sidequest to reunite Riddel with her beloved Dario, who is still alive in Home World, although he’s lost his memory.  It’s a long involved quest, and we learn a little bit about Riddel, Karsh, and Glenn in the process (Karsh and Dario’s relationship mirrors that of Radius and Garai right down to the sudden but inevitable betrayal because of the Masamune, except Karsh defeated Dario in fair combat after Dario attacked him with the Masamune).  The ultimate reward for completing this series of events (which require you to go back to Viper Manor with Norris in your party, because the Porre army’s still there and they’re under orders not to let anyone in) is a boss fight with Dario that’s very difficult unless you know to just continuously hit him with offensive elements that aren’t white or black so he spends all his stamina countering with debuffs that don’t hurt your party and then the Mastermune, Serge’s ultimate weapon (also, you can go claim Dario’s Einlanzer in Termina for Glenn, so he can now dual wield Einlanzers and become the game’s second strongest physical attacker after Serge).

All of this running around culminates with a trip to Home World’s Fort Dragonia, where Serge can finally reclaim his original body and all the people that were recruited before he became Lynx will rejoin.

Leah – While tracking down the Green Dragon, the party encounters a young cave girl named Leah.  No one’s really sure how Leah ended up in the present, but she is nonetheless hanging out in the giant prehistoric wildlife preserve that is Gaia’s Navel, and she’ll join you in order to beat up dinosaurs.  Leah bears a passing resemblance to Ayla from Chrono Trigger, which makes sense, because it turns out that she’s Ayla’s mother.  She is unquestionably adorable and a really strong yellow innate character.

Miki – After finally finishing the Marbule subplot that was abruptly put on hold before we went tromping through the Dead Sea (you have to finish it to wake the Black Dragon), you can recruit Miki, the lead dancer of the Magical Dreamers.  I have no real opinion on her because I find most of the red innate characters to be really boring.

Steena – Steena is the chief of Guldove in Home World, and a Dragon Shaman.  She joins the party once you acquire the blessings of all six Dragon Gods.  I always thought that Steena had a lot of potential as a character, but because she joins your party right before you switch back to Serge and she’s white innate, I always found her to be redundant in good party setups.

Draggy – Back in the first two hours of the game we picked up a big egg in the Fossil Valley, and we’ve been carrying it around ever since.  Once you get to Home World’s Fort Dragonia, you can go to the basement and stick the egg in the last working incubator, which will hatch it, producing a baby dragon.  I don’t know anything else about Draggy because we’re at the point in the game where new characters just are not worth dealing with if you have a party setup that you already like.

Turnip – Turnip is an anthropomorphic Turnip who speaks in butchered Elizabethan English.  He can be dug up at Hermit’s Hideaway in Home World with Poshul in your party after freezing the burnt ground in Another World’s Hermit’s Hideaway.  He’s one of the last characters available to recruit, so naturally he barely gets any use because setting up new characters at this point in the game is a huge chore.

NeoFio – Technically you can recruit NeoFio much earlier, but because it took me forever to remember how to get back inside Viper Manor after rescuing Riddel (stupid Norris), she’s one of the last characters I’ve picked up.  She’s a literal flower child who was created by Luccia to be a new, better kind of lifeform.  I have literally never put her in my party.

Orlha – Orhla’s the bartender in Guldove.  She’s good friends with Doc, and she offers to join your party after you beat her up (it’s all a big misunderstanding, naturally), but not before Serge gets his body back.  I don’t understand why this matters, because she already trusts Lynx, but whatever.  Maybe she’s secretly really racist against demi-humans, despite the fact that she lives in the one town in El Nido where demi-humans and humans get along really well.