This story begins with me getting some long overdue maintenance done on Rachael’s car.  I wasn’t prioritizing it the way I should have, and things came to a head when we had a tire blow out earlier this week.  Seeing that this needed attention, I took Rachael’s car for a few days so I could get it serviced, especially since this coincided with her beginning her summer classes.  For one day, I planned on dropping the car off to get some work done on the brakes and then going to hang out with my long time friend Becky, who also happens to be on summer break (well, “happens” probably isn’t the right word; we’ve worked together for four years, so we’ve always had the same break schedule). 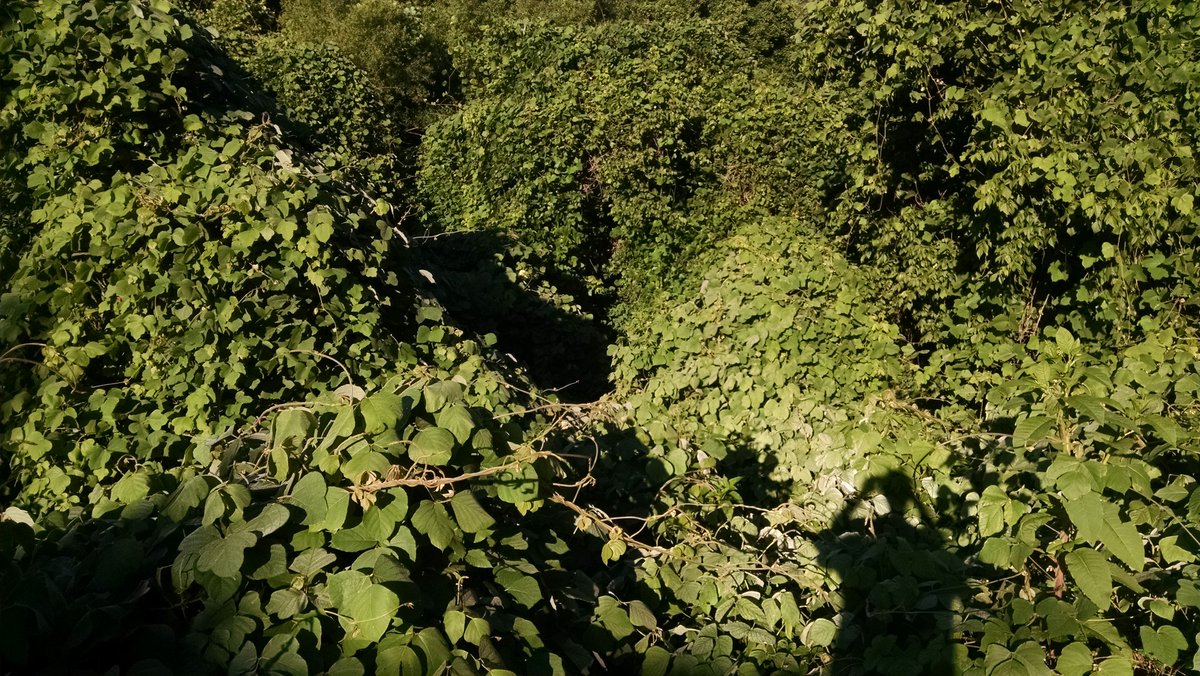 Folks, kudzu is no joke.

As things happened, Becky was also without a car, so I planned to hike the short distance from the mechanic to her place, which involved a pleasant stroll through an old graveyard, a briefly harrowing walk along a stretch of road without room for pedestrians on either side (it was fine; the road doesn’t see much traffic at all at that time of day), and a momentary pause at a patch of kudzu to take a picture, because that stuff is really impressive up close.  Once I got to her place she greeted me with tea, and we set out with our plans for the morning.

In town there is a local park that contains a community center where Rachael and I went contra dancing with Becky and some other friends a couple times a few years back when we first moved to Athens (it’s kind of like square dancing, but dances often last around ten minutes, and it’s really energetic), a community pool, hiking trails, a lake with a dog-walking area, and a small zoo with local indigenous wildlife.  It’s within walking distance of Becky and her fiance Hugh’s place, so we took off with a couple of full water bottles, the intent to see all the animals at the zoo, and no idea when I was going to hear about Rachael’s car.

Walking to the park was incredibly pleasant.  It’s located in the middle of a heavily wooded area, and the road we went along was shaded by trees the entire way.  Traffic was a little heavier than normal, so we had to keep stepping off to the side while cars passed, this felt more like part of the adventure than an inconvenience.  Aside from running, I don’t deliberately go outside much, and taking the time to walk somewhere that under normal circumstances I’d drive was a great change of pace.  My sense of smell isn’t very good, but I enjoyed the scent of the trees and plants.  It’s a different sort of environment from what’s located along my normal running route (and honestly, when I’m exercising what I’m smelling is the last thing on my mind–until I pass by some roadkill that hasn’t been cleaned up yet).  Along the road, Becky told me about a game she and a friend of hers sometimes play when they run that route, saying that you get to take a walking break if you can sprint up the steep hill at the end without stopping, otherwise you have to keep running.

At the zoo we saw a lot of different local animals, including several kinds of owls.  Becky somehow spooked a barred owl so that it puffed up on its perch and stared at her until we moved along to another enclosure.  We also saw a family of black bears (Becky said the cubs had grown a lot since she’d last seen them a few years ago), and a bald eagle who looked quite dignified on his perch.  One of the most fun parts was seeing a vulture playing with its meal of a dead mouse while children who were there for a field trip looked on. 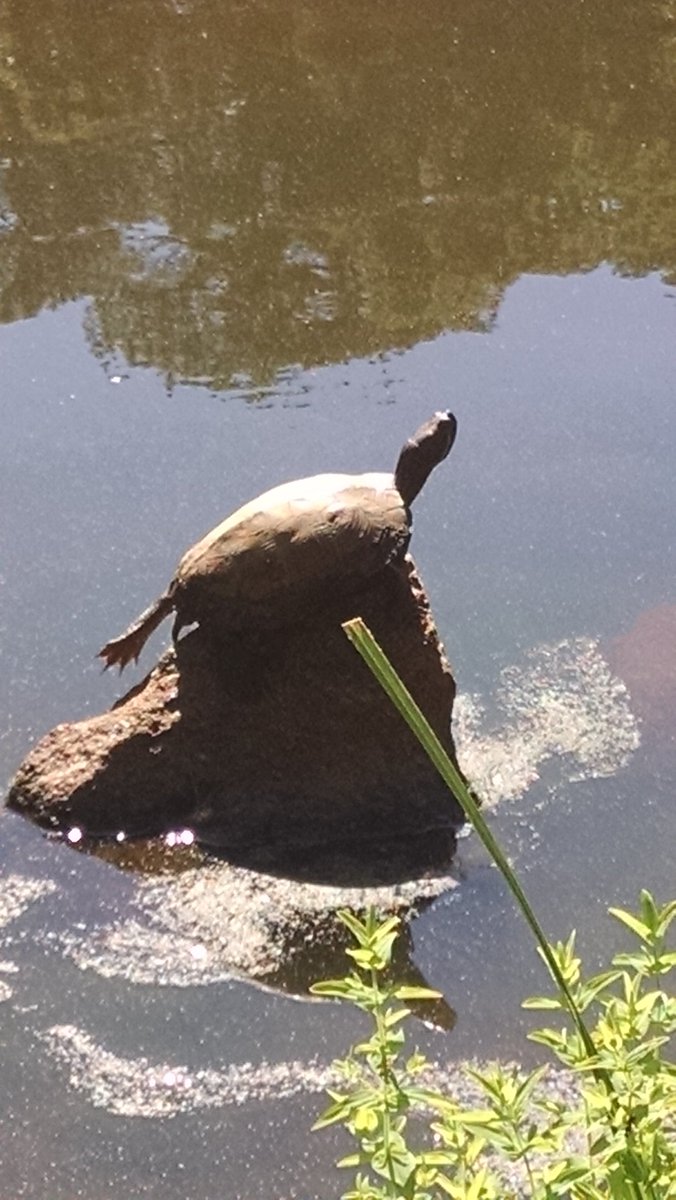 This turtle was totally chill while I took its picture. Also, it found a nice rock where none of the other turtles could crowd it.

After we toured the zoo, I suggested we go look at the park’s lake before going back home.  For a summer day in Georgia it was incredibly mild, and Becky had mentioned that the lake was full of turtles.  As you all know, turtles are, objectively, the best animal, so I wanted to see them.  And see them, I did.  The area around the lake isn’t as shaded as the rest of the park, so wherever there was a rock sitting above the water, as many turtles as could fit were visible sunning themselves.  We got to see some pretty big turtles, including a couple that had shells that were probably a foot in diameter, all covered in algae.  Most of the turtles were pretty skittish, but some paid no mind to people walking around (Becky explained to me that a lot of locals release their pet turtles in the lake when they can’t take care of them anymore; it’s not the most ecologically responsible practice).  Those were usually the domestic breeds who had been released.  While at the lake we also got to see a drake trying unsuccessfully to mate with a few ducks, who repeatedly chased him off.

Back at Becky’s place we decided to watch Interstellar, which neither of us had yet seen; it’s a good hard sci-fi movie that warrants re-watching.  Around lunchtime, Hugh came home from work and the three of us went to get some food at the local burrito chain.  I have an enduring love of overstuffed Tex-Mex burritos, so this was the best of all possible ways to cap off the day.

Altogether, it was a really good way to spend a day with my friends.  I’m a pretty introverted person, so I can usually go for long stretches subsisting on the minimal social interactions I manage on the internet, but I do sometimes get anxious to spend time with people, especially when Rachael’s busy with school.  Becky and Hugh let me impose on them for a day, and it was great.  I’m really thankful to have friends like them around.