So, when I wrote up my post for the last issue, I mistakenly said it was the end of Nuala’s story in The Kindly Ones.  I had forgotten that she does get a little bit more resolution in this issue and the next, so I want to revisit her quickly before I get into the meat of the issue, the relationship between Dream and Matthew the raven. 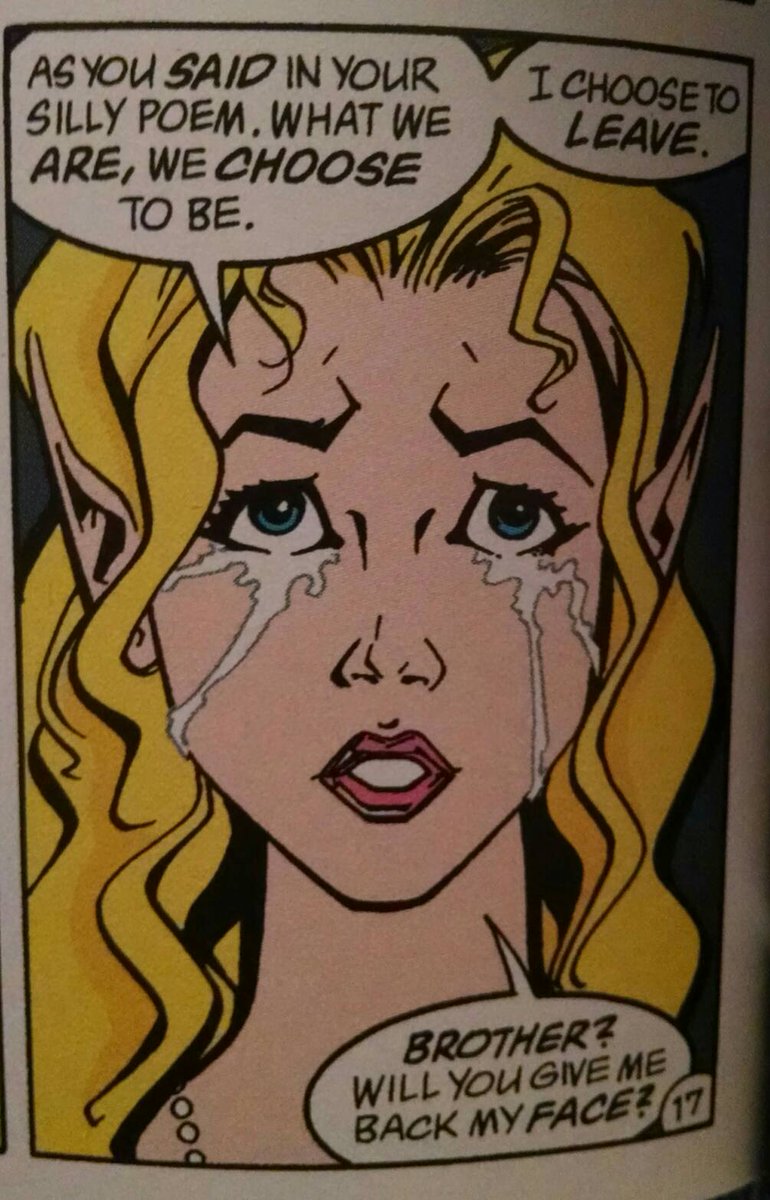 Yes, Nuala! Get away from that toxic environment. (Artwork by Marc Hempel)

Nuala’s scene in this issue is a brief one; we see her grieving her part in Dream’s doom and the fact that she’s still stuck with the glamour that Cluracan put on her to save face in front of Queen Titania.  A boggart who’s appeared to pester Nuala before shows up and recites a bad poem to entertain her.  Nuala immediately recognizes the boggart as Cluracan in disguise, and she complains to him about Dream being in danger and not returning her love.  Cluracan rather flippantly asks if she would prefer that Dream did love her and was in danger, once again highlighting how he tends to diminish his sister’s feelings.  The intended point, that it’s ridiculous for Nuala to focus on Dream’s affection while he continues to be mortally threatened by the Furies, is a fair one, but it still diminishes Nuala’s stake in the story.  I’d prefer if she hadn’t fallen in love with Dream, but that’s one of her two major motivations throughout The Kindly Ones, so we need to respect how it impacts her character.  She’s reeling from a failed confession of love, and that’s certainly something with which most people can empathize.  Nuala’s other motivation, which I think’s a far less troublesome one for the audience, is her frustration at having her own wishes constantly undermined.  It’s fitting that Cluracan’s silly poem serves to inspire Nuala to leave Faerie and go make her own way for once.

The main event of this issue is between Dream and Matthew.  Matthew has been around since the second major arc of The Sandman, The Doll’s House.  I don’t remember if I’ve gotten into his background as a character before, but it’s worth bringing up here that readers commonly believe that Matthew the raven is the supporting character Matthew Cable from the comic series Swamp Thing.  During Alan Moore’s famous run on that series, Matthew Cable became an alcoholic and a domestic abuser, and he was eventually killed off following events that play out like a fantastic version of domestic violence.  In the continuity of The Sandman, Matthew is one of the select few mortals whom Dream keeps from going into Death’s domain so that they can serve a purpose within the Dreaming.  Understanding Matthew’s mortal life provides a lot of important context for his relationship with Dream throughout The Sandman.

Because so much of Gaiman’s cosmology is informed by his extensive knowledge of folklore and mythology, it’s not surprising that he established that Dream keeps a raven as a messenger and advisor; Odin has appeared at regular intervals with his own ravens Huginn and Muninn.  In The Kindly Ones, ravens are a recurring motif, with Gaiman using them as a way to signal the impending slaughter in the Dreaming and also having Dream explain to Matthew that he’s employed a long line of ravens.  This is a question that Matthew’s wondered about for a while now (I think the first time the question comes up is during Brief Lives), and it points toward his doubts about his role in the Dreaming.  Matthew’s history is never directly discussed within The Sandman, nor is any explanation given for why he was chosen to be Dream’s new raven, and his questioning (which seriously began at the start of The Kindly Ones) suggests that he’s in the dark about his arrangement as well.  This existential crisis strikes me as notable because it emerges at just the moment when Dream is in the depths of a parallel struggle.  In The Kindly Ones‘s first chapter we find Matthew seeking out Dream to check on him and to ask for more information about the Dreaming’s line of ravens.  It’s not a very fruitful conversation for Matthew, and he comes away from it in just as broody a mood as Dream.

I think the obfuscation on Dream’s part (he dismisses Matthew rather than offering any answers) is significant because it marks a split between these characters that hasn’t been present before.  Dream doesn’t generally like to explain things if he thinks they don’t need to be known, but in the time that Matthew has been his companion, they’ve always had a slightly more open relationship than that.

This is where Matthew’s background comes into play.

Remember that Dream’s arc throughout the entire series has been a gradual development of empathy and humility.  I think that his long imprisonment in the Burgess house and the subsequent struggle to reclaim his power from John Dee do a lot to teach Dream that he would be better served to build up his interpersonal skills, and it’s no coincidence that he selects Matthew to be his new raven once he returns to his full stature.  Matthew’s mortal life ended in ruin, and he made a lot of choices that damaged people he cared about; he’s a flawed person who knows a lot about messing things up, and he’s invested in trying to be better.  These qualities make him an ideal advisor to Dream, who at least subconsciously knows he needs to learn the same lessons.

What we’ve come to understand since the end of Brief Lives and throughout The Kindly Ones is that Dream is deep into an existential crisis that he doesn’t believe he can escape.  His nature is too fixed to fully embrace the changes he needs to make to repair the relationships that he cares about, and his rejection of Matthew in that first chapter is indicative of that.

Here in chapter twelve, where Dream is ready to confront the Furies with the full knowledge that he really only has one option to get them to leave the Dreaming alone, he relents and allows Matthew to accompany him.  That Matthew remains loyal to Dream, even after he’s been mostly shut out throughout this story, is pretty heartwarming.  That the last exchange between Matthew and Dream involves Matthew insisting that Dream needs to ask nicely almost makes me want to cry.  Even when Dream’s fully aware that he’s about to die, he’s still learning how to be better from Matthew.

Next time, Dream dies and the aftermath begins.