It occurs to me that Grant Morrison spends the first half of All-Star Superman exploring what he thinks is at the core of several iconic Superman characters (to review, Superman has everything under control and doesn’t trust humans; Lois Lane is only concerned about her status in relation to Superman and only realizes the patriarchy is a thing after getting high on “alien chemicals”; and Jimmy Olsen is a hapless schmuck who believes that Superman’s safety takes precedence over that of Earth); they all hark heavily back to the Silver Age, for which I guess Morrison has the most nostalgia.

Issue #5 of All-Star Superman features Morrison and Quitely’s take on Lex Luthor, the seminal Superman villain.  The last few decades have tended towards treating Luthor as something of a secret villain; starting with John Byrne’s Superman reboot of the late ’80s, The Man of Steel, Luthor has been depicted primarily as an ultra-wealthy businessman who engages in clandestine criminal activity.  This version makes him a nice foil to Superman, since Luthor’s status makes it impossible for Superman to confront him directly, even though many of his schemes are designed to directly attack Superman.  There was even a period in the early ’00s when Luthor got himself elected President of the United States and Superman couldn’t do anything about it, even though he knew that the country had elected a supervillain (oh, to have an actual criminal mastermind heading into the White House instead of, well, you know). 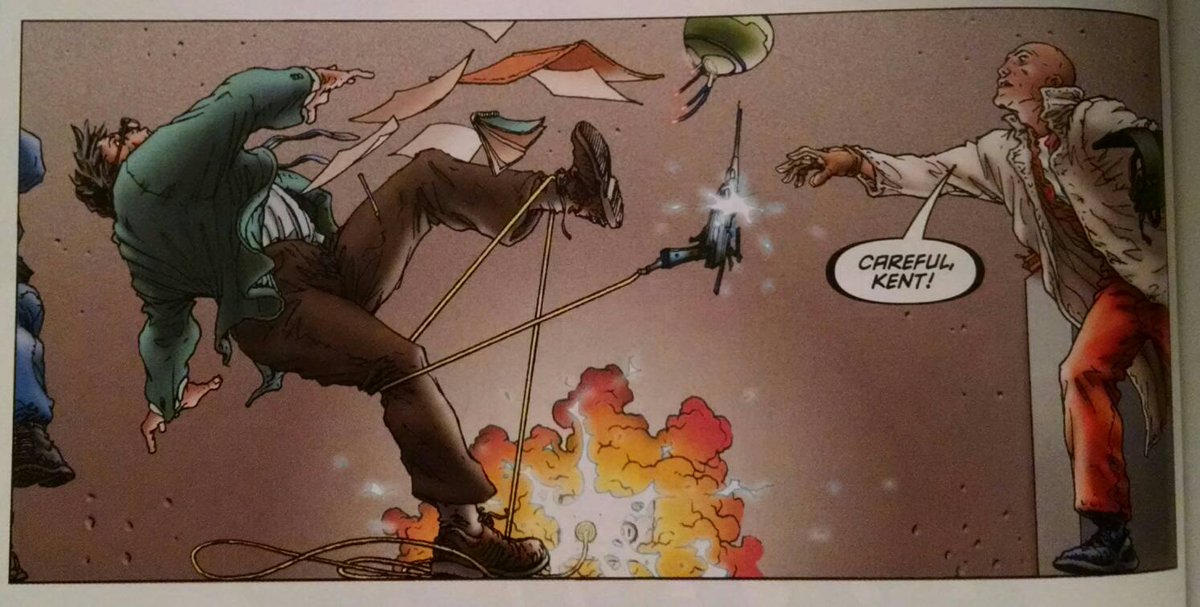 This is only the first time Superman saves Luthor from accidental death in this issue. It’s funny until you start to think about the fact that Luthor’s a danger to everyone on the planet and these moments of secret heroism enable him to continue in his delusion that he deserves to rule over everyone. (Artwork by Frank Quitely, colors by Jamie Grant, letters by Phil Balsman and Travis Lanham)

Morrison totally ignores all that history though, instead opting to present Luthor as he was originally conceived and depicted from the ’40s into the ’80s–as a criminal genius who openly flouts society in favor of flagrant supervillainy.  Morrison’s Luthor begins the series in a position where he’s pretended reform, but some investigative journalism from the Daily Planet reveals that he lied about that; he’s swiftly arrested after Lois’s dad (he’s a general) stumbles across Luthor in the middle of enacting the scheme that leads to Superman becoming overloaded with solar energy so that he’ll die.  We catch up with him again at his trial where the judge lists off the names of some of history’s most destructive and dangerous men (including Hitler) as the people Luthor takes as his personal role models.  There’s nothing subtle about this version of the character; he’s an unapologetic narcissist and megalomaniac; his only weakness is his obsession with Superman’s apparent superiority to him (the plot that kicks off this whole series is brought about by Luthor one day realizing that he has crow’s feet while Superman still looks the same age as always).

Now, here’s the thing that Morrison does in this issue which I love.  Luthor is an arrogant jerk even when he’s locked up in maximum security prison with other supervillains; in fact, he goes beyond arrogance into blatant carelessness.  The conceit of this issue is that Clark Kent has scored an exclusive interview with Luthor while he’s awaiting execution on death row.  Clark goes to the prison where he finds Luthor tinkering with projects that appear harmless, and in an interview that spans a prison riot and a harrowing underworld escape (for Clark, not Luthor), we see Luthor expose himself to mortal peril multiple times only for Clark to clandestinely save him.  Before they leave Luthor’s workshop, Clark saves him from electrocution by a faulty extension cord, and Luthor doesn’t even notice.  That’s just how smug he is.

A reminder that Luthor is always dangerous, even when he’s ridiculous, even to Superman. (Artwork by Frank Quitely, colors by Jamie Grant, letters by Phil Balsman and Travis Lanham)

And this is the thing that Morrison does which is so great.  Luthor is a genuinely scary supervillain.  He’s brilliant, motivated, and completely unconcerned with anyone besides himself, but he’s also terribly dependent on the mercy of Superman.  He can’t acknowledge this fact, but it clearly terrifies and infuriates him.  If not for Superman’s largess, Luthor probably would have gotten himself killed long before this moment, and the world would be a better place for it.  Even more striking with all this is that Superman continues to protect Luthor because he sees Luthor’s potential; the man could do incredible things to improve the world if he would just get over his obsession with besting Superman.  I think Superman’s a little naive on this point (Luthor listed Adolf Hitler as one of his heroes!), but he’s in a position where he can allow himself some naivete.  Aside from the most recent scheme that has succeeded in getting Superman to die a very slow death, Luthor can’t hurt him, and he’s able to prevent Luthor from hurting others.  This dynamic strikes me as an unconscious expression of privilege in action; when you have someone who can’t actually be harmed by another person’s nastiness, they are much more easily able to be forgiving; considering that the rest of the world recognizes rightly that Luthor is a clear and present danger to everyone, Superman’s mercy seems misplaced here.  Considering that the issue ends with Luthor escorting Clark out through a secret passage he burrowed with the help of one of his “harmless” inventions before returning to his cell, it’s clear that the only person capable of keeping Luthor in check is Superman, and he has a case of the Pollyannas when it comes to his arch nemesis, who we know has already succeeded in killing him.