The first half of All-Star Superman is not as good as I remember it being.  It has its high points (“The Gospel According to Lex Luthor” is still a darkly funny examination of Superman’s arch nemesis, even if current real-world context makes megalomaniacs who fawn over authoritarians and fascists more scary) and it has some real low points (the two-issue Lois Lane arc is garbage in too many ways to be redeemable).  The sixth issue of the series falls somewhere in between the extremes; it’s not a bad story, but it’s also not a terribly memorable one.

“Funeral in Smallville” acts as something of an origin story for Superman.  It’s not The Origin Story (Morrison and Quitely dispense with all of that on the first page of the first issue in a terse four-panel layout that hits the high points without belaboring a story with which readers are almost assuredly familiar) so much as a snapshot of one of the defining moments of Superman’s personal history.  In many continuities, Superman operates as an adult in a period of time after the death of his adoptive father Jonathan Kent.  This is a significant moment for the character because it marks his transition from relying on Jonathan’s advice and guidance in building a moral compass to learning how to navigate his role in the world independently.  In Morrison’s Silver Age inflected version of this event, Jonathan Kent dies while young Clark, as Superboy, is busy trying to corral a Chronovore, a multidimensional creature that eats time.  It’s a weird, nonsensical explanation for Clark being unable to get Jonathan emergency help when he realizes he can’t hear his father’s heartbeat, though I suppose the point is to prevent a scenario like in Man of Steel where Clark disregards the safety of other people in the middle of a large scale emergency.  It wouldn’t look good for Clark to abandon his fight with the Chronovore to save his father when other people could be injured by his withdrawal (again, never mind that this story sets up a cadre of future Supermen who have traveled back in time for the express purpose of dealing with the Chronovore so Clark doesn’t have to get involved). 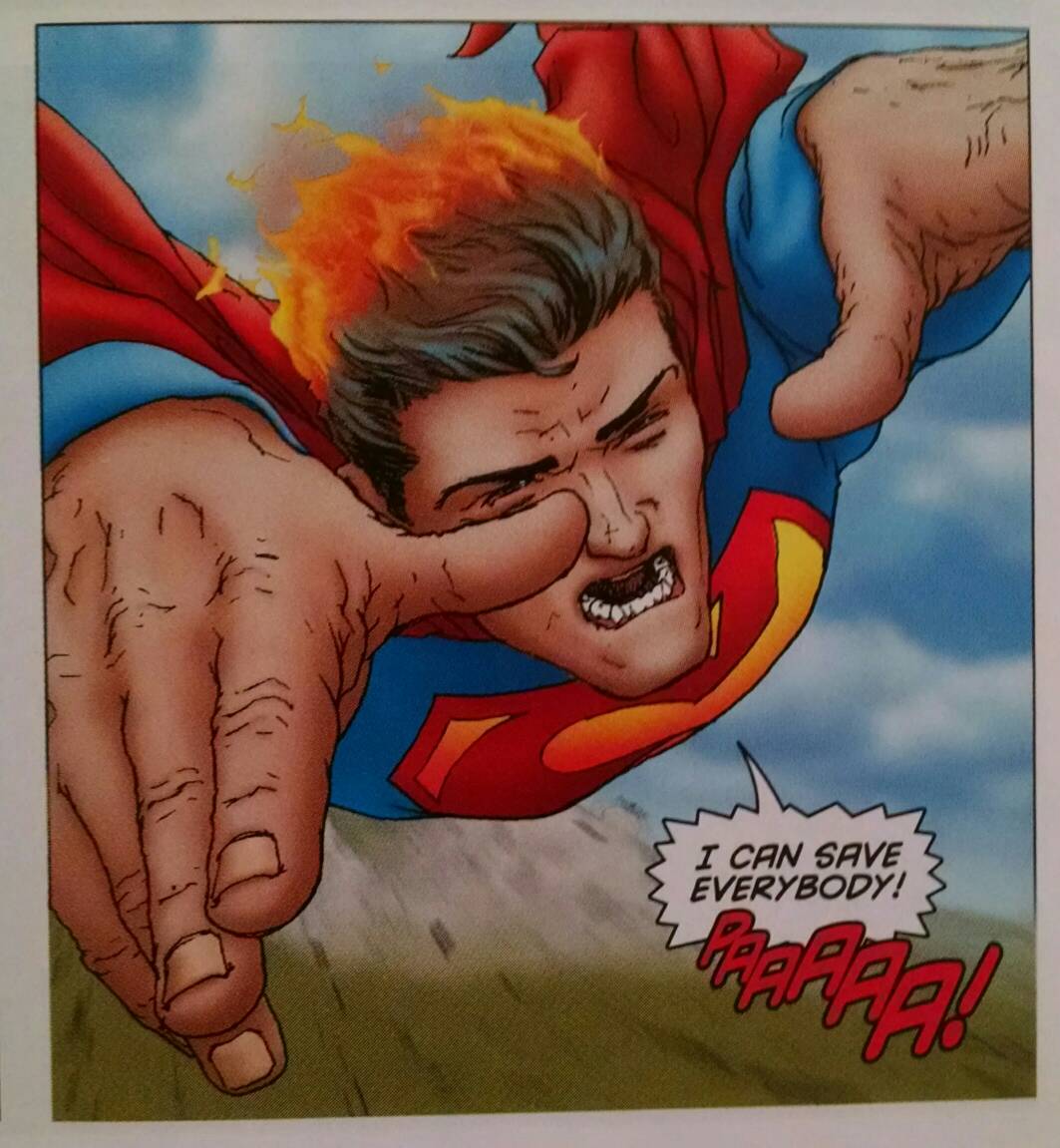 The reveal at the end of this issue is that one of the future Supermen, the Unknown Superman of AD 4500, is actually the Superman we’ve been following in this series come back in time to try to prevent Clark missing Jonathan’s death.  That he fails in this task is a poignant moment when you couple it with young Clark’s immature assertion that he can save everybody and what we’ve seen of Superman in the present so far where he never stops watching for opportunities to save people from danger.  This is a story about Superman’s limitations in the midst of a series that’s exploring if he can reach an unlimited state.

The biggest complaint I have with this story is that while its emotional core is solid, it’s also heavy with Silver Age fluff.  Morrison and Quitely build in cameos by Clark’s high school friends Pete Ross and Lana Lang, include the thoroughly absurd Krypto the Superdog (no explanation is offered for why Krypto is around in Clark’s past but he’s never mentioned in the present), and has clunky expository dialogue like, “It just turned Farmer Stone’s cows in the hamburgers they were destined to become!”  This stuff’s supremely goofy, and it can be really entertaining, but it clashes terribly with the significantly more grounded scenes showing the Kents contemplating Clark’s growth and what the future holds for him.  I’m not a huge fan of the juxtaposition in this issue.