About a quarter of the last issue of All-Star Superman is dedicated to a sequence where Superman, having just died on the floor of the Daily Planet, experiences the Kryptonian afterlife.  It’s a sort of blank slate, what-if parallel version of events where Krypton didn’t explode and Kal-El never went to Earth.  Superman speaks with his father, Jor-El, and we get the delightfully handwavy explanation that Kryptonian physiology evolved to absorb and store the solar radiation of stars, and Superman is now in the midst of an extreme mutation that’s converting his entire body into “solar radio-consciousness.”  It’s a fancy way of saying that, surprise, Superman is not in fact dying; he’s just turning into a being of pure energy.  The major tension of the plot gets resolved here; we have our assurance that even though this story is ending, Superman’s going to be fine.  All is well; time to beat Lex Luthor.

What follows from this setup is a sequence where Superman systematically outsmarts Luthor while also driving home the point that Luthor’s obsession with him is just an excuse for not doing more to try to help the world.  We learn that Superman had suspected Luthor’s plan from the moment he noticed one of his robot assistants was malfunctioning, and he has planned everything to play out the way it does in this issue.  With Luthor tripping on his own super serum, Superman can’t match him in direct physical combat, so instead Superman goes through a cat-and-mouse game with Luthor, using a gravity gun to force Luthor to work extra hard and burn through his dose of serum much faster than expected.  In the end, Luthor has an epiphany about the interconnectedness of the universe just before his powers run out and Superman knocks him out.

Unfortunately for Superman, there’s no time to enjoy his victory since the fight with Solaris, the Tyrant Sun, in the previous issue has damaged Earth’s sun; Superman only has seconds to get to the sun and repair it before his body completely transforms into energy, so he kisses Lois goodbye and then flies off to save the day one last time.

The issue’s denouement is a short series of scenes showing how Metropolis has adapted in the year following Superman’s departure (Lois refuses to believe he’s dead, and continues to steadfastly wait for his return); Superman, now made of pure energy, happily working the mechanisms he’s installed in the sun’s heart to keep it going; and Leo Quintum unveiling to his assistant Agatha a project to replicate Superman now that they have his complete genetic code.

It’s an incredibly breezy final issue, all things considered, and it ends on a really triumphant note, which is really where you want a series designed to represent the core of Superman to go.  Everything is hopeful, and we have multiple hints that Earth will be fine going forward.  Even Superman, who has been laboring since the beginning under the assumption that he was going to die, is in a position to live happily doing what he loves.  There’s even a slight suggestion that Superman has now become immortal, and will continue on far into the future; way back in issue #6, the leader of the Superman Squad from far in the future is a golden Superman who very lightly suggests that he is the same as the original Superman.  Superman’s final panel where he’s operating the sun shows him in a form that’s very similar to that earlier appearance.

In the end, I’m not sure that All-Star Superman holds up quite so well for me in comparison to when I first read it.  It hails from the decompression era of comics, and even though Morrison and Quitely do their best to make each issue feel really compact in comparison to contemporary work, the series overall feels much more sparse than other comics that I like; I suspect part of this sense comes from alternating between Watchmen and this comic, since Watchmen, in addition to being from an era when comics storytelling was stylistically much denser, is also a paragon of dense narrative and symbolic structure in its own right.  Beyond simple fluffiness of the content, All-Star Superman also suffers from some all too common problems with representation in comics; Lois is an irritatingly flat character except for in that one issue where she gets really paranoid, and the cast as a whole is overwhelmingly white.  Individual moments are still great, but the work overall feels diminished when you consider it as a whole. 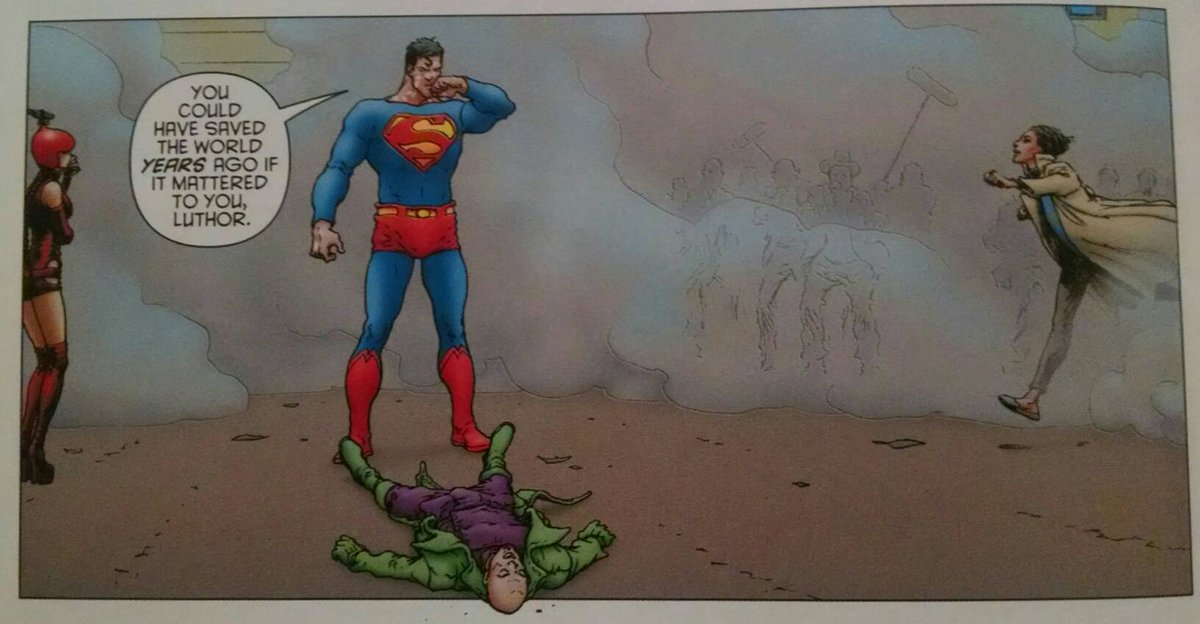