I’m not sure how long I’ll be playing Horizon: Zero Dawn, but I figure that while it’s taking up my time, I’ll try to parse out some thoughts that I’m having as I go along. 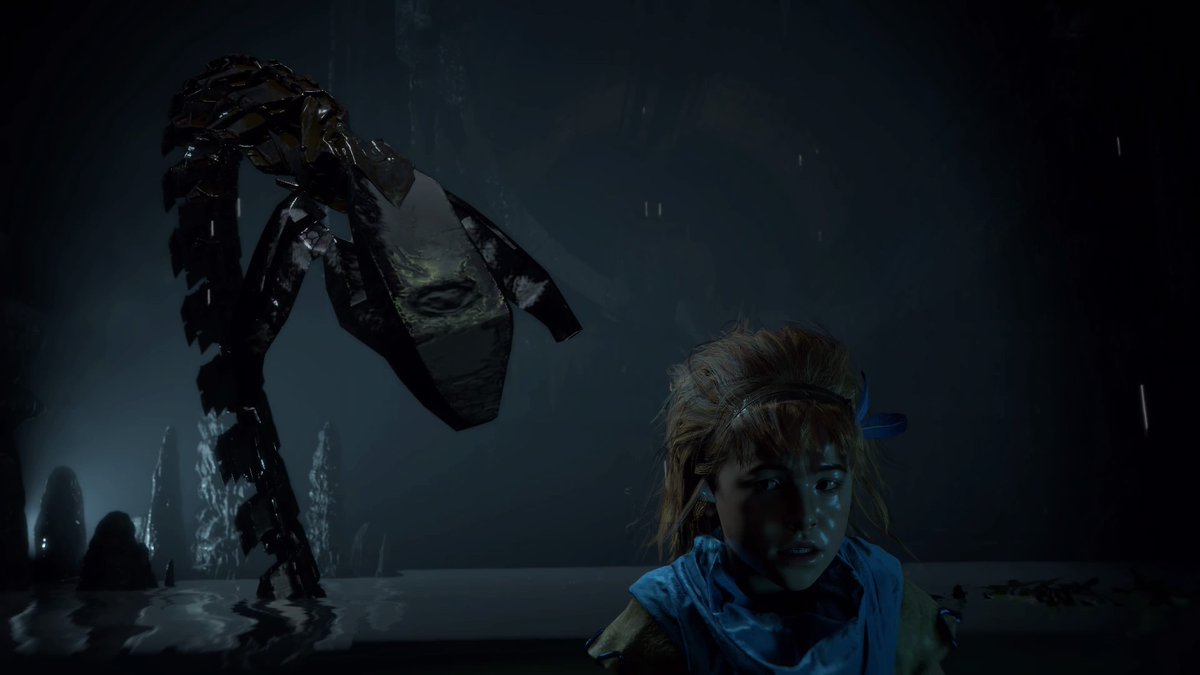 This isn’t foreboding at all…

After about ten hours of play (I think; I’m not keeping close track, and aside from an extended session last Saturday while hanging out with friends, I’ve only had time to play an hour here and there in the last week), I’m starting to gather a bit more about the story.  The early hours revolve around Aloy’s effort to rejoin her tribe, the Nora, after being raised as an outcast from birth.  Aloy isn’t just trying to rejoin her tribe, however; she wants to win the Proving and earn a boon from the Nora Matriarchs which she intends to use to find out about her origins. 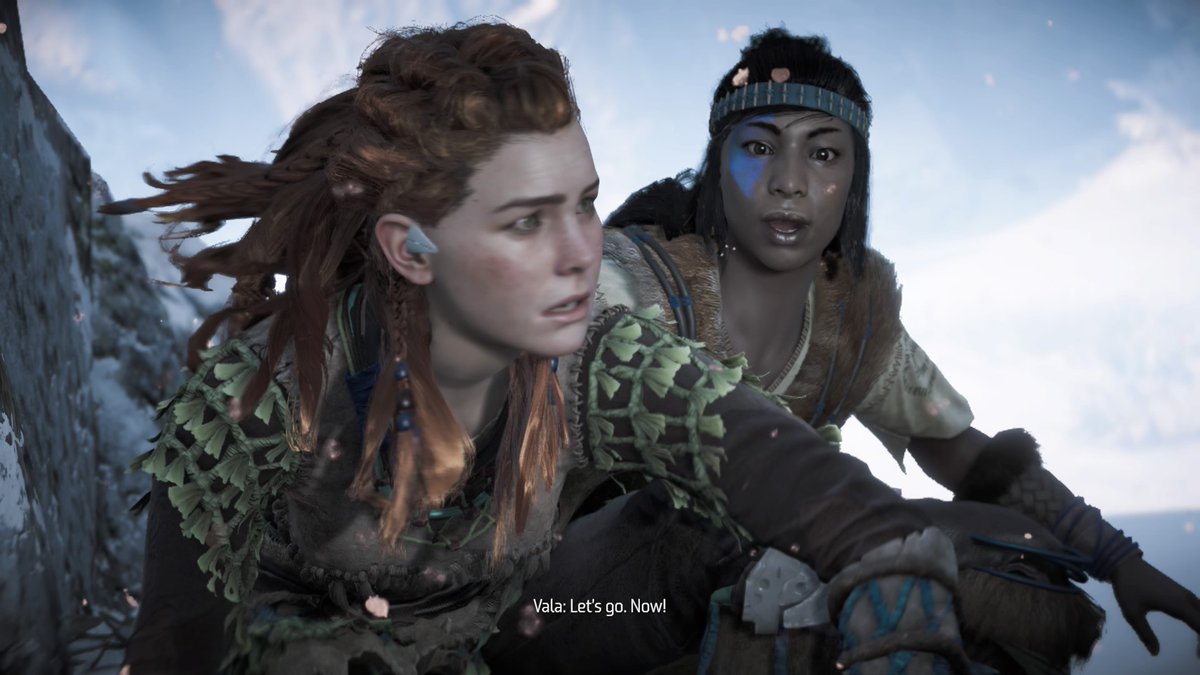 This is the last moment before things go bad for Aloy. I mean, more bad than they have been already.

The Proving goes according to plan with Aloy winning in a dramatic fashion, but before the concluding ceremony can take place, the braves-to-be are ambushed by cultists who have technology that allows them to co-opt the wild machines.  Pretty much all the new braves die except for Aloy, who is saved by her foster father Rost sacrificing himself to protect her from a massive explosion.  Aloy recovers inside the mountain that the Nora call the All-Mother (they believe the mountain is the source of all life which, given the sci-fi setting, isn’t actually that far-fetched) where she learns that the cultists were seeking her out because of her resemblance to another woman with an over ninety-eight percent genetic similarity (Aloy’s Focus is a handy little plot device).  Inside the mountain there’s some kind of advanced shelter that recognizes Aloy’s genetic markers, but doesn’t grant her access because of her slight dissimilarity with the woman in the data from the cultists.  Matriarch Teersa, who has been Aloy’s key advocate among the Nora, interprets all of this through the Nora’s All-Mother religion, and decides that Aloy needs to go on a quest to purify herself so she can enter the ‘sanctum.’ 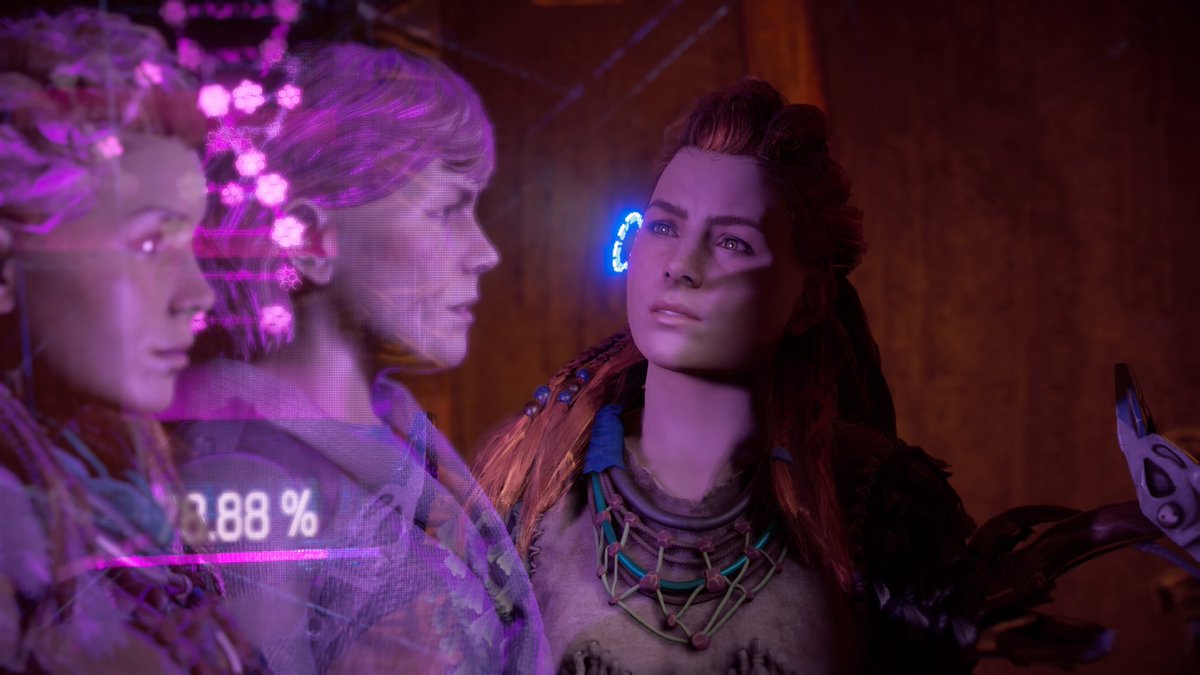 And that’s how we get the justification for Aloy leaving Nora lands (there’s a taboo against members of the tribe leaving the valley) to explore the rest of the world.  Besides being a perfectly cromulent way to start a video game quest (you don’t need that much reason for anything in a video game to be honest), it’s also a really interesting take on the tension between scientific thought and faith.  Aloy has been established up to this point to be something of a skeptic among the Nora; being an outcast from birth and denied most of the social conditioning that other Nora receive, she’s less wary of the past’s technology and more inclined to be critical of the Nora’s metaphysical beliefs.  Once she discovers that All-Mother is just another ruin from the Metal World, Aloy’s feelings about her tribe’s faith, which was already ambivalent, appears to reach a nadir.  Aloy serves as a proxy for the player whose perspective on the Nora is that they’re misunderstanding technology that they don’t even realize actually is technology.  Teersa’s reaction to all of this is particularly interesting, since she clearly has a preferred interpretation that assigns metaphysical significance to Aloy’s interaction with the All-Mother but doesn’t seem to have any illusions about All-Mother’s technological nature.  It’s an interesting commentary on the elasticity of faith and its ability to peacefully coexist with scientific knowledge.  I expect that this tension will be a significant motif moving forward through the plot as Aloy explores other lands and the ways that other tribes have learned to cope with the world in which they live. 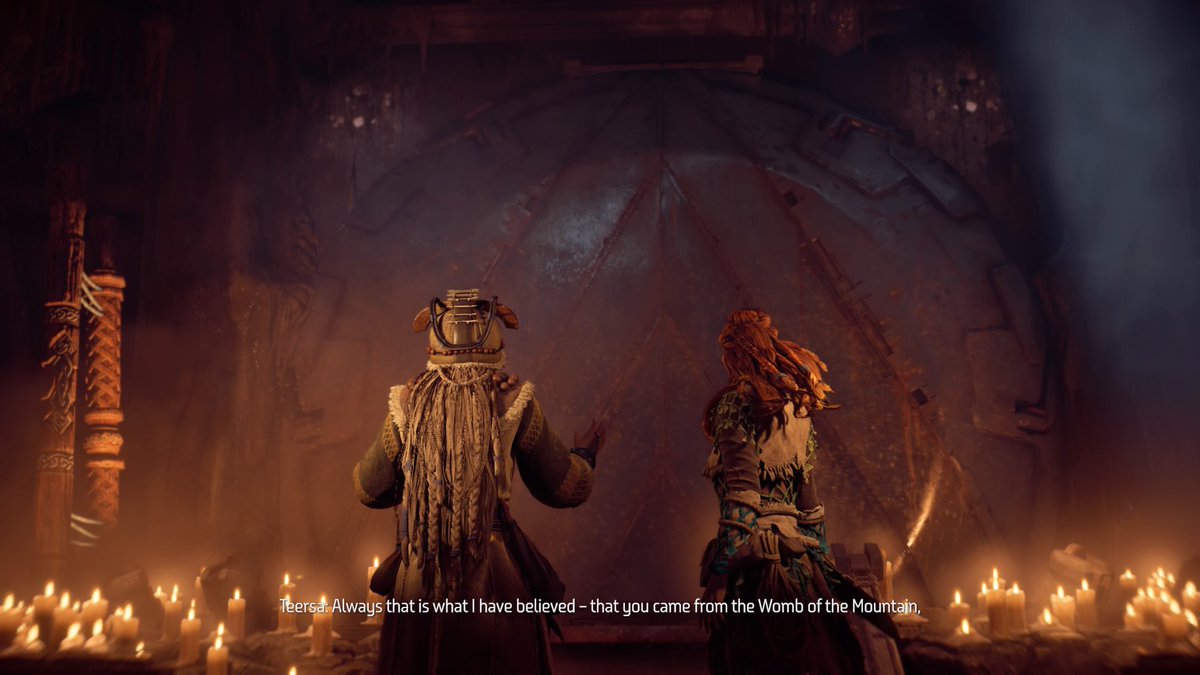 Um… yeah, cause Aloy’s totally a clone of someone who was inside this shelter.

From a gameplay perspective, Horizon continues to be highly engaging.  I mentioned before that I’m hoping for a twist on the skill tree concept, but I don’t think that’s coming.  This is only a minor disappointment, because the variety of strategies available for hunting machines is incredibly satisfying.  I prefer to do stealth builds in games when they’re available, and the game has been pleasantly accommodating in that regard.  While equipment and weapons can be customized to emphasize different traits, I haven’t built Aloy’s gear in a way that provides much in the way of strong offense or defense.  Traps are quickly becoming my preferred method of taking down big machines, mostly because they carry the almost unfair advantage of allowing the player to inflict damage on prey without receiving direct aggression; Aloy is agile, but soft and squishy, and she can’t take much punishment in head-on confrontations (especially not when I’m playing, as I still feel relatively clumsy with the controls).  At the moment I’m enjoying making use of explosive trip wires; they can be set from stealth cover, and if a machine fails to trip them, I’ve invested in the skill that allows me to pick unused traps back up into my inventory.  I want to play more with Aloy’s mobility (besides sneaking she has a decent range of other methods to traverse terrain that seem designed to encourage highly spectacular fights with machines), but in the early hours of the game that doesn’t feel feasible quite yet. 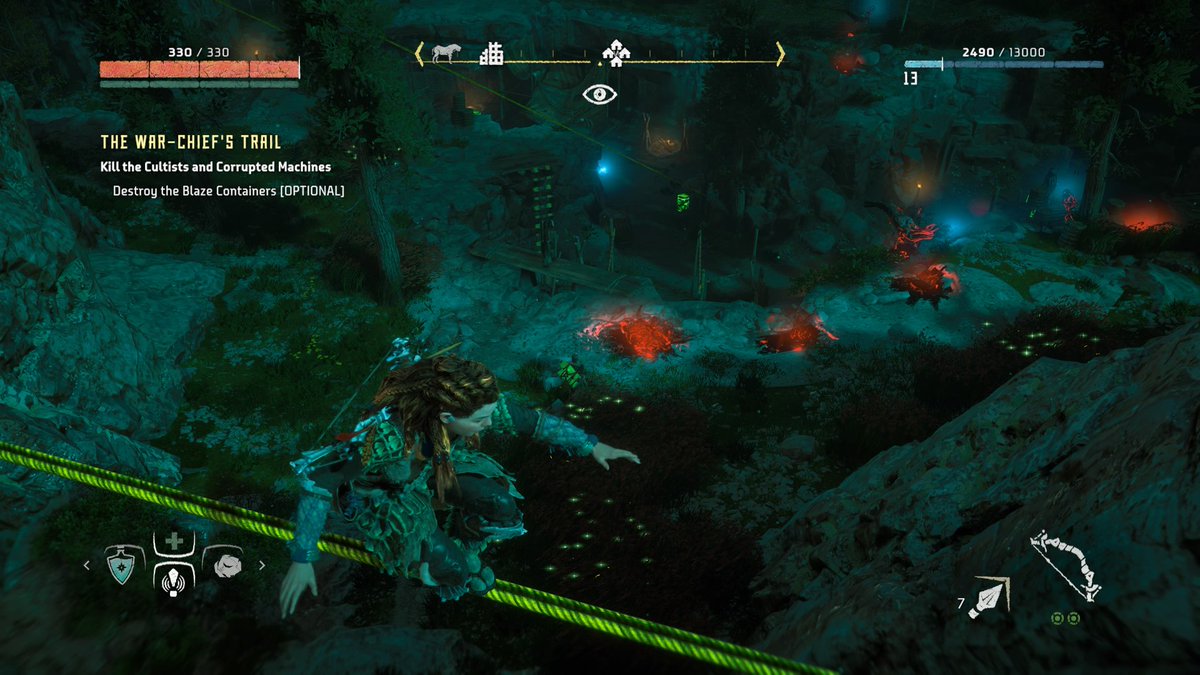