It often feels like much of the first volume of Kamala Khan as Ms. Marvel has been a series of increasingly high profile team-ups.  Beginning way back in the very first arc following Kamala’s first encounter with the Inventor’s minions (not even the Inventor himself!), every story arc has involved at least one prominent guest star to help bolster the book.  I get the sales motivation behind doing this; when I was a kid buying comics in the early ’90s, I absolutely gravitated towards books that featured characters I liked on the cover (back then it was pretty much a given that if a hero appeared on a comic’s cover, then they would make a substantial appearance in the book itself–at least, that’s the logic I operated by at the time), and Marvel made more than a few sales on my impulse to get anything that featured the X-Men.  Still, understanding a strategy and enjoying it are two different things; I read this series because I’m invested in Kamala and her supporting cast.  Wolverine and Lockjaw and Loki make fun cameos, but I don’t particularly care about seeing them in this book; I’m just thankful that G Willow Wilson is an adept enough writer to make the likely editorially mandated guest stars fit well within the stories she’s telling.  They’re fun bonuses, nothing more.

I don’t feel that way about Carol Danvers’s appearance in this arc.

One of the guiding motifs of Kamala’s ongoing story is her hero-worship of superheroes, particularly the Avengers, and how she works constantly to emulate her role models.  Way back in the beginning, before Kamala has officially claimed the mantle of Ms. Marvel and her shape-shifting powers are significantly more flexible, she expressly models her superhero persona on Carol Danvers’s heyday as the original Ms. Marvel.  It’s not discussed explicitly, but Kamala’s defaulting to the old Ms. Marvel and her use of Captain Marvel as the focal point of her vision during her time in the Terrigenesis cocoon strongly suggests that out of all the Avengers, Carol Danvers is the one that she most strongly connects with.  Kamala becoming Ms. Marvel is largely unintentional happenstance, but the desire to emulate this person in particular has been there all along, and so Carol Danvers showing up to help out here at Kamala’s lowest moment makes tons of sense both emotionally and narratively.  The world is literally ending over Manhattan, and someone needs to help Kamala focus on doing what she can in her community.  It’s not really clear precisely why Carol Danvers shows up to pep talk Kamala at this moment (I have my theories, which I’ll elaborate on in the discussion of the next issue), but we’ll just accept for the moment that she’s here and she’s willing to help.

There are more important things to discuss than how you acquired your nom de guerre. (Artwork by Adrian Alphona, colors by Ian Herring, letters by VC’s Joe Caramagna)

What Captain Marvel’s arrival does narratively is give Kamala another mentor figure to bounce her feelings and thoughts off of as she copes with another new experience in her life as a superhero: the unwinnable fight.  There are a lot of instances where much more powerful heroes have been in situations where everything seemed lost but then a last minute miracle/plot contrivance helped them save the day, but it’s also not uncommon for heroes to experience genuine defeat.  Kamala has been exceptionally lucky as a brand new superhero who has had relatively few failures.  Yes, she got chased away by the Inventor’s henchlings when she was first starting out, and the whole previous episode with Kamran and Lineage culminated with Kamala being abducted and forced to flee from New Attilan, but those can be viewed as small defeats in longer-term conflicts (the fact that we’re continuing the Kamran and Lineage arc while editorial is demanding that Kamala’s world be destroyed two issues from now underlines that perspective).  This is a hard thing for anyone to learn how to process, but especially a teenager who has taken it upon herself to defend her community from weird stuff that generally falls outside the purview of normal neighborhood problems.  The complete mental breakdown Kamala is on the verge of having at the end of issue #16 would make sense under less stressful circumstances.  Fortunately, Carol shows up just in time to offer the perspective and advice that any teen hero needs. 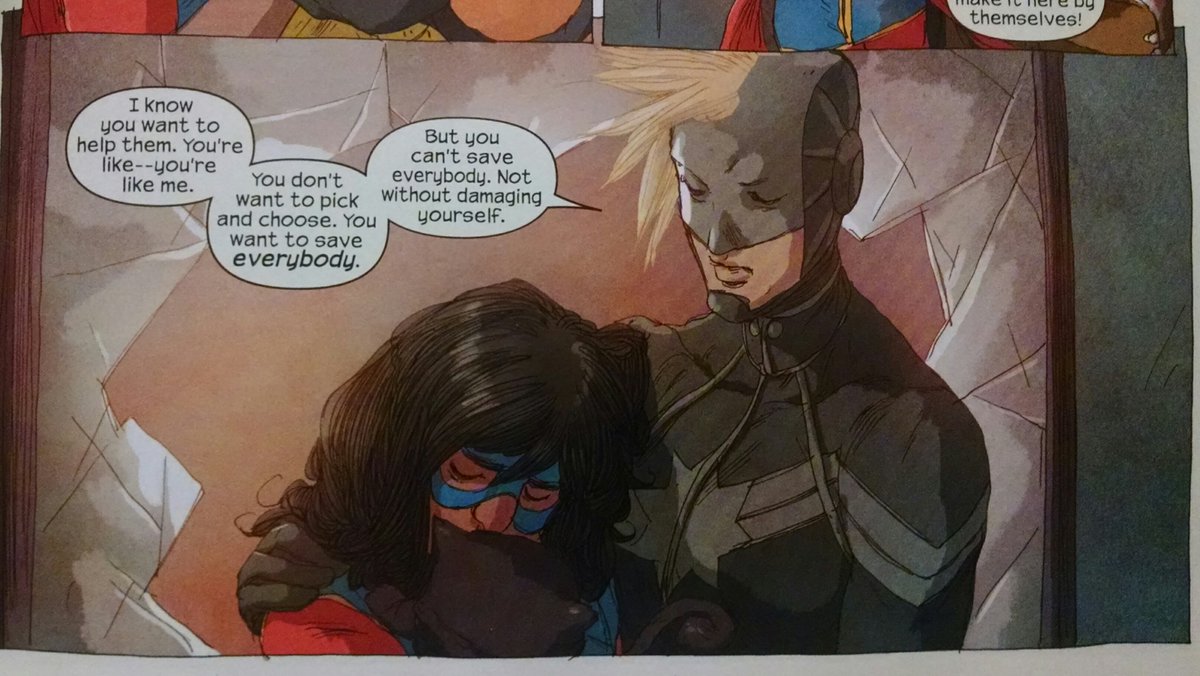 The point that Carol tries to drive home while she’s assisting Kamala in tracking down Kamran and Aamir is that Kamala needs to understand she can’t win every battle she’s faced with.   The crisis in Manhattan is just too big to worry about.  It’s beyond Kamala’s ability to help, and so stressing about it is just going to deplete her available resources for doing what she can: organizing her community and saving her brother.  It’s a tough lesson that’s best illustrated by a brief scene where Kamala finds a makeshift shelter that someone has constructed for a bunch of cats.  She wants to rescue the animals, but Carol sensibly points out that doing so will make it harder to find Aamir, and the cats seem as safe as they can be where they are. 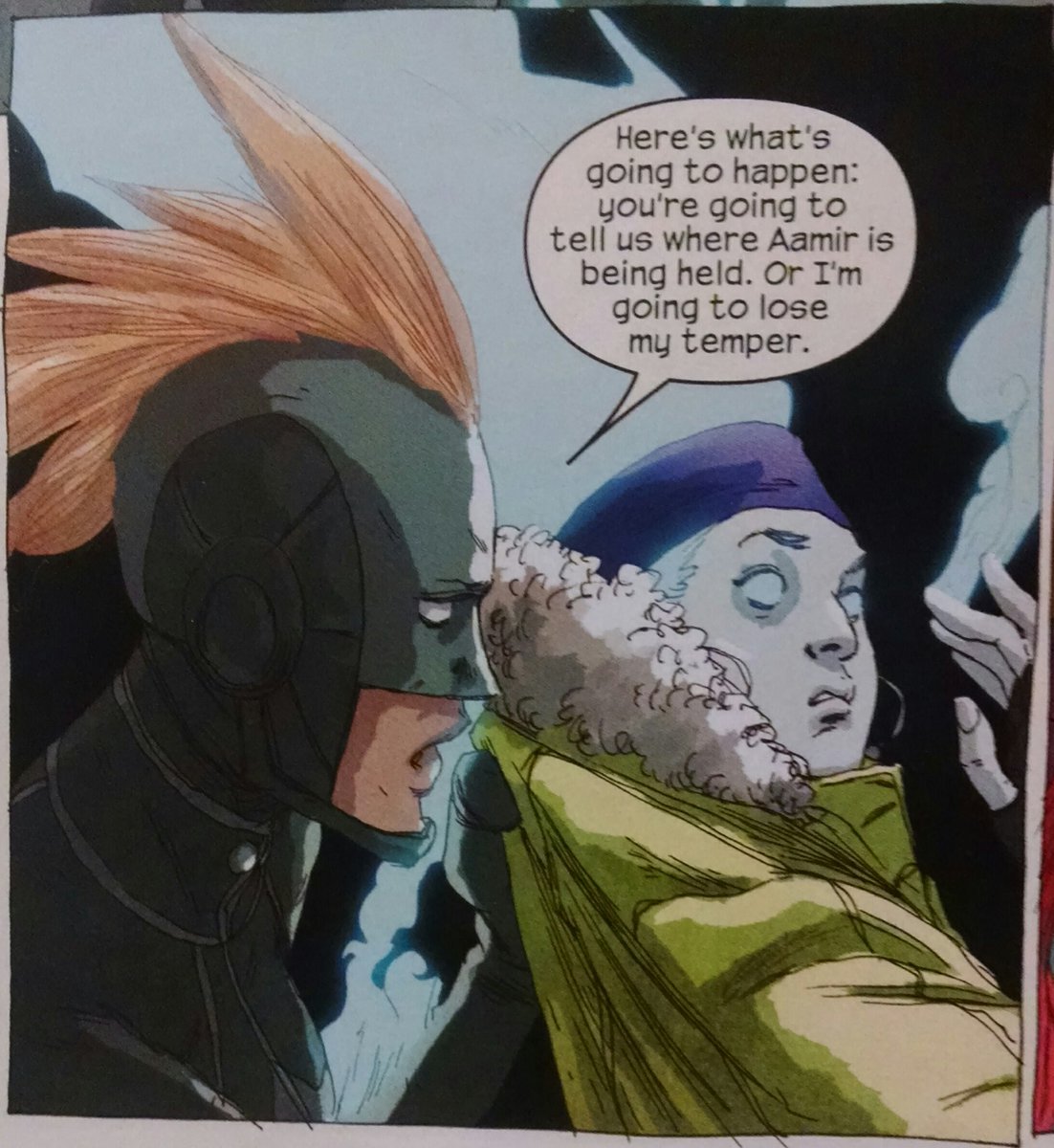 Carol, I relate so much. (Artwork by Adrian Alphona, colors by Ian Herring, letters by VC’s Joe Caramagna)

The issue’s big climax is a brief confrontation with Kaboom, which is sort of laughable because it ends abruptly when Carol grabs Kaboom by the collar and tells her to give up Kamran and Aamir’s position or she’s going to get angry.  The dynamic here reminds me a lot of moments in the classroom where I have to swoop in and tell bickering teens to knock it off before I have to resort to consequences.  While Kamala’s problems are real and legitimate, this whole situation is so far below Carol’s pay grade that it’s clear she’s just here because she wants to do Kamala a favor (even if we still don’t get a real explanation exactly why that is).  Kaboom gives up immediately, and the issue ends with Kamala and Carol finding Aamir in the middle of something that might be Terrigenesis, although it seems off.