I mentioned on Friday that I was generally not impressed with the treatment of women in Breath of the Wild.  I don’t suppose I should really be surprised about this fact; Nintendo is a very conservative Japanese company with a corporate identity as being a producer of family friendly entertainment.  This is perfectly fine, except that “family-friendly” is often code for “featuring non-progressive depictions of gender roles and identities.”  You get that in spades throughout Breath of the Wild. 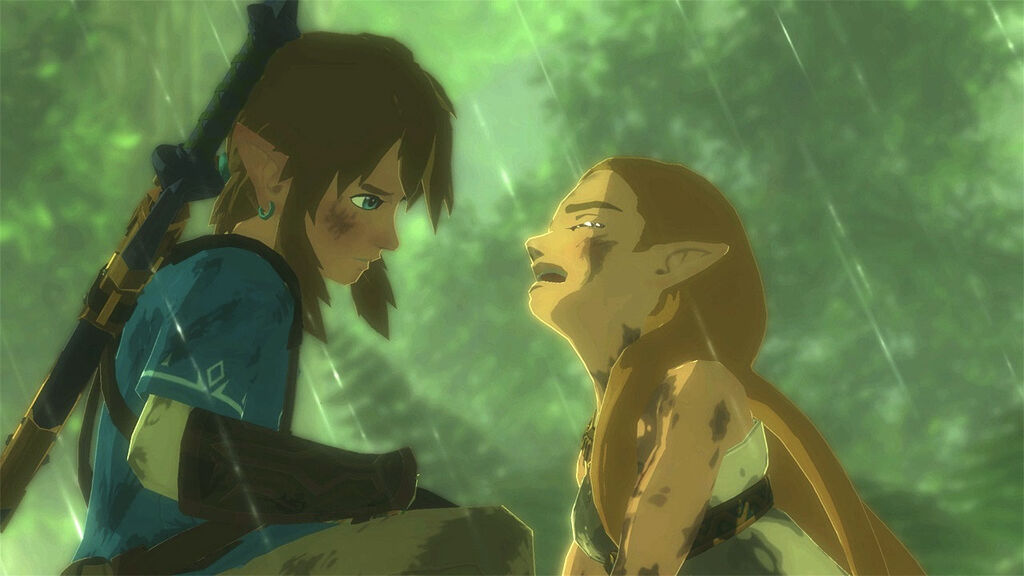 “I know, it really sucks to be a woman in Hyrule.” (Image credit: Fandom Wikia)

Perhaps the most egregious offense in terms of weird regressive characterization comes from the Zora Champion, Mipha.  Like all the Champions, Mipha was defeated by Ganon when he attacked Hyrule a hundred years before the start of the game.  That by itself isn’t so unusual, but what is is Mipha’s relationship with Link.  Where the other three Champions express respect and affection for Link in their various ways, Mipha has the misfortune of being in love with Link who was generally unaware of her romantic feelings.  Unrequited love is a perfectly fine story point, but it feels really icky given the fact that Mipha has been dead for a century and she’s still in love with this guy who was never interested in her in the first place (we all know that Link and Zelda are OTP).  Rachael commented once we finished the Zora section of the game that she was really mad that Mipha’s entire character seems to revolve around her undying love for Link (this is definitely not a crush; she made a suit of armor for him because he was the guy she wanted to marry) while other Champions appear to be psychologically healthy.  They all regret that Ganon bested them, but it’s actually possible for Link to help achieve the goals they all had in death; Mipha just really wanted Link to love her back, and all she gets is the consolation prize that he’ll accept her help.  It’s a raw deal, and because there’s literally nothing else about the character, she ends up feeling like the flattest in a cast that’s already mostly one-dimensional.

While Mipha is perhaps the most egregious example of poor female characterization, you get a lot of other more minor examples.  Many of the villages, if they have female characters, rely on a relatively narrow range of character types, from the painfully shy girl to the fawning fangirl.  Essentially, most any given female character is likely to be defined in relation to a man.  Even the Gerudo, who are effectively an all female race in the context of the game, spend an inordinate amount of time discussing the fact that they have to travel all over the country because they can’t find husbands in their home town where men are forbidden.  Perhaps most bizarre of all is the near total erasure of queer characters from the world.  Among the Gerudo you would think that at least some lesbian relationships would occur, but these sorts of dynamics among characters are left invisible.  Gay characters hardly fare better; the only character who reads as gay (primarily because of Japanese stereotypes about gay men) is Bolson, the head of the Bolson Construction Company.  His interactions with Link are on the flirty side, but there’s little beyond that.

Surprisingly, genderqueer characters are slightly better represented than gay and lesbian characters (though really only slightly).  Again, because the Gerudo are an all-female race and they forbid men from entering their city, the player has to solve the problem of how to make Link appear female so that he can gain entrance into the town.  The solution comes in the form of a character outside the town who is biologically male but wears Gerudo women’s clothing.  Other characters in the game alternately gender this person as male or female depending on whether they’re aware of the character’s sex.  When Link finally encounters the person and has a conversation, the player has the option of interacting with the character as either male or female; it’s a small, pleasant moment that you’re given the choice to decide how you’ll respond to a character’s preferred gender presentation (there’s not really enough information to be sure of the character’s preferred gender identity).  The scene’s almost perfect in this respect, except that it ends with the punchline of a gust of wind blowing aside the character’s veil to reveal their beard underneath and Link responding in shock.  It feels like the intended read is that if you treat the character as a woman, you are being fooled.  I was left with a bad taste at the end of the scene, but it came close to being a pleasant surprise (I know that the value of almost is subjective, so you’re mileage may vary on the quality of this moment).  Perhaps more interesting and respectful than the clothes seller is the way the game treats Link’s own use of female coded clothing.

Rachael and I were pretty delighted by the whole subplot of Link needing to get some women’s clothes in order to enter Gerudo Town precisely because it gave us the chance to reconsider Link as a genderqueer character.  Back when everyone was still anticipating Breath of the Wild, there was a lot of speculation over whether this was going to be the Zelda game where a female protagonist would finally take center stage.  The first images of Link showed a character who was exceptionally androgynous, perhaps the most androgynous we’ve ever seen in any Zelda game.  It was quickly confirmed by Nintendo that Link was canonically male, but then the game came out and everyone learned about Gerudo town and the women’s clothing you had to wear to gain access.  Because the game is flexible in how it allows you to use equipment, there are no hard and fast rules denying players from using the women’s clothing in other contexts.  The game clearly doesn’t mean for you to use the women’s clothing regularly (its defense is abysmal and unlike other special outfits it can’t be upgraded), but you’re not barred from the choice.  Even more importantly, the aesthetics of the clothing on Link’s body don’t read as humorous like in some other games that have depicted male characters in women’s clothing.  Link’s androgyny makes the clothing look attractive on his body, and there are no situations where he’s humiliated or made the butt of a joke for wearing that particular garment.  While he’s wearing this outfit, all characters simply take it for granted that he’s female.  It’s because of all these small details that Rachael and I agreed that this is a Zelda game where Link is a genderqueer character.

Of course, we can’t discuss a Zelda game and its treatment of gender without at least touching on Zelda herself.  The lore of the Legend of Zelda franchise has long necessitated that while Link fulfills the role of hero, Zelda is typically stuck in a more passive support role.  Perhaps with the exception of Tetra in Windwaker, this Zelda is the most explicitly uncomfortable with her identity.  Through the memories that Link can recover from visiting various spots around the world, we learn that Zelda’s relationship with her Champion was a complicated one.  From Link’s ordainment as the Hylian Champion, Zelda resents him for representing her own inability to act independently.  She doesn’t like having a dedicated bodyguard, and it takes Link saving her life a couple of times before she accepts his value (the fact that Zelda even needs to be saved by Link has complex tones to it; at the same time she begins to see and appreciate Link’s dedication to her well being, we’re also seeing evidence that she really does need a bodyguard; Zelda’s ambitions, like Mipha’s, are undercut by the story’s needs).  Even after Zelda accepts Link, we still see that she feels uncomfortable with her pseudo-priestly duties and would rather devote her time to developing as a martial leader so she can help defend Hyrule.  The final memory in the series has Zelda accidentally embracing her power as the avatar for the Triforce of Wisdom to save Link from certain death, which is great except for how it continues to undermine what she has really wanted to be able to do since the beginning.  The summit of Zelda’s story is her learning to accept a role she’s never really wanted, and (given that I haven’t finished the main story yet) I’m not sure that we see any sort of resolution for her that is built around just accepting what she was destined to do from the beginning.  Zelda’s struggles in Breath of the Wild are probably the more well developed for any character in the game, but even they are founded on a narrative that requires her to accept the passive role while Link goes off and has all the adventures.

6 thoughts on “The Women of Legend of Zelda: Breath of the Wild”