If you’ve made it to the fifth issue of The Wicked + The Divine then it’s time for congratulations: we’re about to hit on our first major character death and the test of how attached one has become to a character comes sharply into focus.  Did you like Lucifer’s devil-may-care attitude and casual disdain for the norms and systems that keep society operating in a way that’s not total chaos?  Too bad; she’s dead.

Enjoy this one image of Tara; we won’t meet her for like another eight issues. (Cover by Jamie McKelvie & Matt Wilson)

The issue starts off with a continuation of a visual gag that Gillen and McKelvie have been working into the beginning of every issue where the god on the cover is directly referenced in the first panel of the issue (this technically isn’t true for issue #1, but given that we see in the conclusion of this arc that Lucifer is doomed, the splash page of the skull feels appropriate).  Our focal god on the cover here is Tara, a god that has been much maligned by everyone in the story (everyone thinks she’s stuck up and weird, and because we haven’t met her, we don’t really have any grounds to naysay it).  The panel shows Lucifer defacing a poster with a stylized portrait of Tara, just the latest bit of destruction in Lucifer’s sort-of-rampage away from the prison where she’s been held.  It’s a fitting place to start since it’s Lucifer destroying the icon of another god, and this issue is all about her fascination and disgust with the Pantheon’s obsession with image.

Of course, Lucifer isn’t just defacing property; she’s also causing mass chaos; cars and police officers in riot gear are on fire, and a crowd is forming to watch the spectacle of the god who’s decided to stop acting like she isn’t a god.  While all this happens in the background, Lucifer meditates on Tara’s philosophy (which seems to apply to most of the gods): “If you exist, you’re staring at me.”  On one hand that’s an absurdly egotistical statement, but on the other, it’s undeniable that the gods are fascinating figures from whom everyone seems unable to look away.  Even Cassandra, who actively decries the Pantheon, is obsessed with making her documentary about them.  We’re clearly supposed to absorb Lucifer’s contempt for Tara (and by proxy, all the gods), but there’s also a strong ironic undercurrent; you can’t exactly wander down the street wreaking havoc without wanting at least a little bit for people to see what you’re doing.

Lucifer’s inability to effectively rebel against the nature of divinity is probably her great tragedy. (Artwork by Jamie McKelvie, colors by Matt Wilson, letters by Clayton Cowles)

Before too long, Lucifer’s stunting attracts the attention of the rest of the Pantheon; Laura and Cassandra are also there as bystanders desperately trying to be part of the bigger story (they’re actually pretty significant players, but only at the end).  The gods with whom we’re most familiar show up to try to get Lucifer to stop what she’s doing in their own individual ways.  Amaterasu, who was friends with Lucifer before they ascended, tries to sweet talk her back to jail, but Lucifer is having none of that.  In a sequence that highlights just how much Lucifer doesn’t get along with the high profile Pantheon members, her greatest contempt seems to be reserved for her best friend.  I think this is best exemplified when Lucifer mocks Amaterasu for using diminutive versions of their stage names; aside from Cassandra mentioning in the first issue that Amaterasu’s real name is Hazel and that Lucifer’s last name is Rigby, we don’t get much information about who any of the gods are apart from their divine identities.  It’s a barb that resonates with Lucifer’s mockery of Cassandra back in the first issue as well; the fact that Cassandra is trans and therefore assumed a new name as part of her transition seems at least in Lucifer’s mind to fall in the same vein of prioritizing image over authentic identity (Lucifer’s also being a jerk because she believes that’s what she does, but two things can be true).  Lucifer’s ire towards Amaterasu is especially fierce since they actually have personal history before the whole godhood thing happened.

Lucifer has had it with your hippy-dippy crap. (Artwork by Jamie McKelvie, colors by Matt Wilson, letters by Clayton Cowles)

When Amaterasu’s attempt to reason with Lucifer fails, Baal and Sakhmet step in to beat her senseless.  This is the first really “comic book-y” moment of the series; several super powered individuals engage in a street brawl that involves lots of face smashing and explosions.  It’s a lot of fun and a good reminder after so many talking heads in the course of the first four issues that McKelvie is a very accomplished artist with a lot of flexibility in the sorts of scenes he can draw.  While Lucifer gets her butt handed to her by Baal and Sakhmet, Laura decides it’s time to call in that favor that the Morrigan owes her, so she goes running into a subway tunnel towards and oncoming train.  The Morrigan saves her and agrees to provide cover for Lucifer so she can escape and hide from the rest of the Pantheon.  This is generally a good thing for Lucifer, because she’s pretty beat up by the time she, Cassandra, Laura, and Morrigan take shelter in a house just on the street that Lucifer has been terrorizing.  Laura is desperately trying to calm things down as she urges Lucifer to hide in the underground with the Morrigan and demands that Cassandra and her film crew stop recording for just a minute.  Lucifer disagrees with this last point. 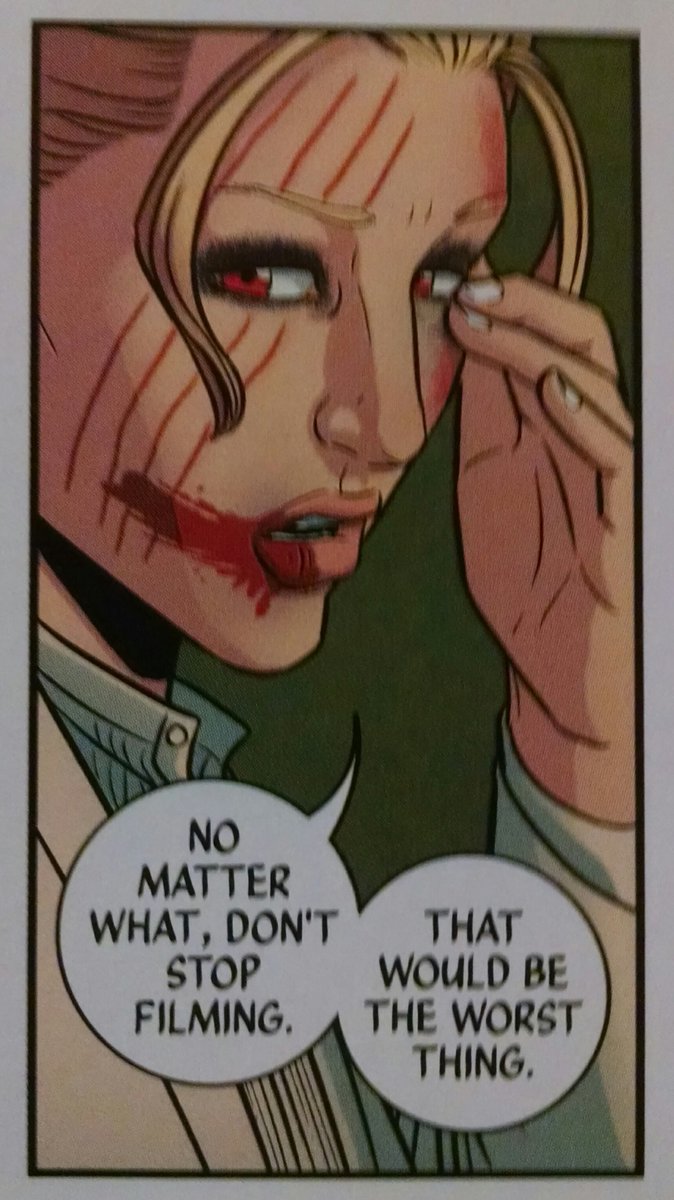 Who would it be the worst thing for? (Artwork by Jamie McKelvie, colors by Matt Wilson, letters by Clayton Cowles)

Again, Lucifer’s disgust with the spectacle of godhood doesn’t stop her from being obsessed with playing into it.  She’s just shown the world that the powers of the Pantheon aren’t an elaborate hoax, and she doesn’t want that moment to pass undocumented.  Her motivations for all of this seem to be a mixture of general weariness of the games the gods play with mortals’ expectations about them, a desire to lay bare what it means to be part of the Pantheon, and that immutable need to perform and be seen performing.  In the second issue Lucifer told Laura, “I need to be on a stage.  If I can’t do that, it’s all so awfully pointless.”  Being cooped up in a jail cell for a crime that she didn’t commit where she’s unable to be in the spotlight is an unbearable punishment to Lucifer, and so she decides that it’s better to bring the full wrath of the Pantheon down on her head so that she can be seen for what she is (or at least, what she thinks she’s supposed to be) one last time.  The whole episode screams hard of Lucifer having something of a death wish, even as she jokes about shacking up with the Morrigan after they’ve escaped from the fight with Baal and Sakhmet.

Before the fugitives can make good on their escape, Ananke steps in to make it clear that someone needs to be held responsible for the mayhem, and she summarily executes Lucifer in view of everyone with a display of her own miraculous power.  Like something of a Greek chorus, Ananke pronounces her moral over the gods’ reckless display of power: “Generally speaking, gods desire nothing but adoration.”  It’s true that Lucifer’s last stand gets everyone’s attention, and this was a major goal, but Ananke’s proclamation flattens out the complexity of Lucifer’s motivations for rebellion; she was both trying hard to fulfill a role she thought she had to own and railing against the artificial nature of the Pantheon’s celebrity. 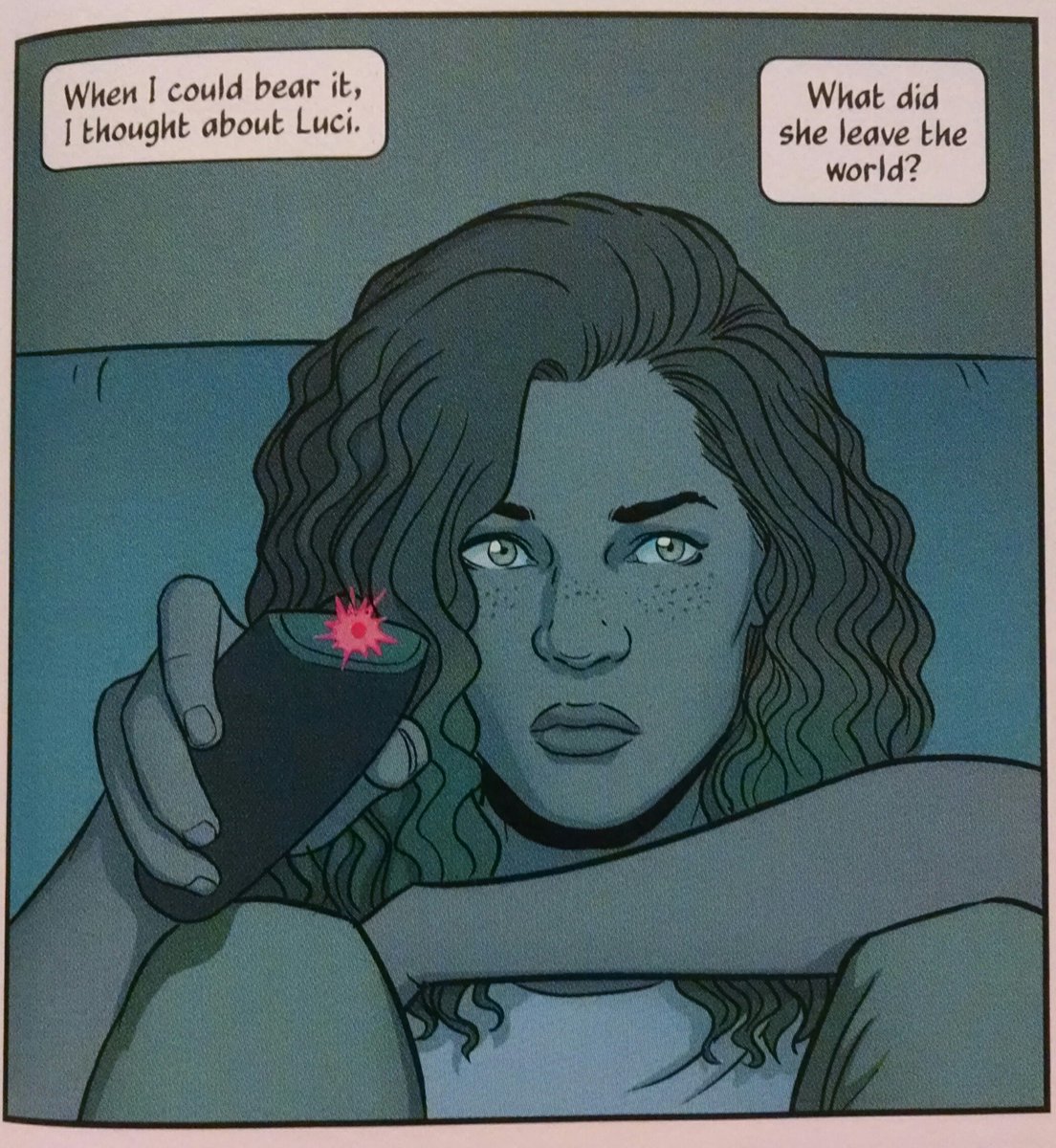 A lot of chaos and paradox. (Artwork by Jamie McKelvie, colors by Matt Wilson, letters by Clayton Cowles)

Ananke’s epigram on Lucifer’s death is only the most public one.  In the aftermath of the execution, Laura tries to process what’s happened and how she feels about Lucifer’s death.  Though it was founded on more than a few lies and only the cruelest bits of truth, Laura clearly thinks of Lucifer as a friend.  The careless afterthought of a final gift that Lucifer gave her, a pack with only one cigarette left, sums up the ambivalence that Laura feels about this episode of her life.  She’s just been through something extraordinary, but all it’s done is helped her realize that she’s not happy with her life.  Instead of doing the watching, she needs to be the one watched.