One of the many ongoing projects that I have at the moment is a gradual re-read of the Claremont run of the original New Mutants book from the ’80s.  There was a sale on Comixology a couple months ago on the series, so I got all of the Claremont stuff for about thirty dollars, which is a pretty good deal when you consider that he wrote over fifty issues on the series before turning it over to Louise Simonson.  One of the collections I bought includes not only the first twelve issues of the New Mutants series, but also the issue of Marvel Team-Up that introduced Karma (it’s okay), the issue of Uncanny X-Men where the X-Men return from space after the Brood Saga and save the New Mutants from a Brood-infested Charles Xavier (it’s fun to see Paul Smith artwork in high quality digital scans), and (perhaps the best bonus of the set) the four issues of the Magik miniseries detailing Illyana Rasputin’s origin in Limbo.

There are certainly some rad elements in the cover of Magik #1, but it doesn’t exactly advertise what you’re actually going to get. (Image credit: Comic Vine)

The first time I read the Magik series, I wasn’t really sure I how much I would enjoy it.  I knew of the character Magik from prior reading about the major players in the New Mutants series (which I don’t think I had yet begun reading at that point), but her concept didn’t sound that terribly interesting to me.  Magically inclined comics characters are not typically my preferred flavor of fantastic (I write this being fully aware that I’ve spent months geeking out over an urban fantasy comics series), and the sword ‘n’ sorcery patina on the Magik series didn’t do a whole lot to reassure me that it would be interesting.  Nonetheless, I had a mission to read all the X-Men related comics I could get my hands on, and this was the origin story of a major character for a series that I was genuinely looking forward to, so I jumped in. 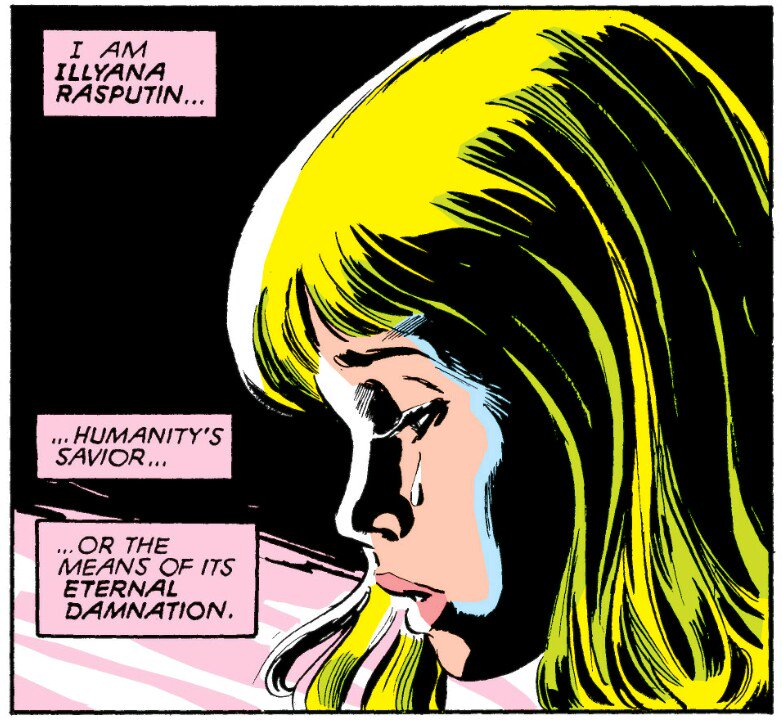 That’s heavy stuff for a fourteen-year-old. Also, I forget how integral inks are to creating mood in older comics. (Pencils by John Buscema, inks by Tom Palmer, colors by Glynis Wein, letters by Tom Orzechowski)

Thankfully, the first page of the first issue helps establish what this story is really going to be about.  The whole narrative is a flashback of Illyana’s experiences during the events of Uncanny X-Men #160 where she was kidnapped by the demon sorcerer Belasco through an interdimensional portal and re-emerged after having approximately doubled in age.  The ending of the series is a foregone conclusion, which eliminates a lot of narrative tension on the basic adventure level of “will she survive?”  Throwing this basic problem out immediately, Claremont created a need for stakes that were a little more personal, and this opening sequence establishes those stakes effectively: Illyana views herself as morally compromised somehow, and we’re going to find out why someone who is still relatively young thinks that about herself.

From that opening, the story unfolds as a series of episodes in Illyana’s life growing up in Limbo with each issue being centered around a different mentor figure.  The first issue focuses on Illyana and an older version of Storm who has grown too frail to use her mutant powers without putting unbearable strain on her body.  In lieu of weather control, this Storm has become an accomplished sorceress who has spent most of her life defying Limbo’s ruler Belasco.  We get hints that Storm has her own history with Belasco that parallels what he plans for Illyana (before Storm can rescue her, he corrupts a piece of Illyana’s soul, which he describes as so pure that it will make the perfect medium for opening a gate to earth for the Elder Gods).  Her mentorship over Illyana is meant to help the child guard against Belasco’s corrupting influence.  The second issue details Illyana’s time under the tutelage of Cat, an alternate version of Kitty Pryde who has been corrupted by Belasco and turned into a partially feline creature.  Cat completely distrusts the use of magic and steals Illyana away from Storm to prevent her learning any more of it.  Cat’s mode of education is an extreme version of sink or swim where she places Illyana into situations that demand the child to adapt and toughen up in order to survive.  Illyana’s time with Cat ends abruptly when they attack Belasco’s castle, and the sorcerer captures them, stripping all of Cat’s remaining humanity away and taking Illyana as his apprentice.  In the third issue Illyana advances rapidly under Belasco’s tutelage, but she feels increasingly conflicted over the alternating abuse and care he heaps on her (as she grows more corrupted by Belasco’s influence, Illyana finds herself more and more attracted to the darkness he’s cultivating in her).  The final issue of the series sees Illyana escape after Storm dies rescuing her from Belasco’s castle; finally independent of any mentors, she has to find a way to balance the influences that have shaped her into something that’s workable for her.  She ultimately chooses to get revenge on Belasco and nearly gives in to her urge to kill him, but she stops short because the aggression is leading her to manifest demonic characteristics.  She returns to Earth having won control of Limbo from Belasco, but still conflicted what her experiences mean for her own character.

On a purely surface level, I found all of this to be a really compelling plot the first time I read it.  I think the element of corruption and struggling with immoral impulses was a really appealing aspect of Illyana’s character back when I was in all the evangelical stuff (remember folks: if you don’t think you’re fundamentally bad, then you can’t effectively do white evangelicalism!).  A character who had to struggle with literal inner demons was the sort of thing I ate up, especially when the framing of her story was so heavily built around a good-evil dichotomy.  Re-reading it now, the thing that comes across so much more clearly is that this is a story about surviving abuse and carrying that trauma with you.  It’s high melodrama all the way through, and Claremont has an uncomfortable relationship with the application of violence as morally wrong in absolutely all circumstances, but the core of the book is the fact that Illyana’s stuck in this dysfunctional family with a patriarchal figure who has repeatedly and openly abused everyone around him in order to maintain a status quo that favors him.  Storm and Cat, while trying to oppose Belasco, are also culpable in perpetuating the abuse that shapes Illyana into who she is.  As folks like to say, hurt people hurt people.