I gave a pretty broad overview of what happens in the Magik miniseries last time, mostly because you have to have a basic understanding of the plot in order to be able to talk more in depth about all the cultural and sociological influences that shape the story.  You have Illyana, a girl who has grown up in a highly abusive environment for about half her life, coming of age while grappling with complicated feelings of self worth and personal morality while also trying to navigate the expectations of other people for what she’s supposed to outwardly present.

If there’s a controlling idea within Illyana’s story, it’s the tension between her internal feelings of being unsettled in her identity and the pressure that everyone else exerts on her to try to get her to fulfill specific roles and expectations.  The motivations for this pressure range from the benign to the deeply selfish, but that spectrum of intent is secondary to the actual harm that Illyana experiences from all corners.  Her ability to establish a personal sense of identity get severely undermined by all of her mentor figures who try to enforce on her an image that reflects their own.  Storm wants her to learn to be a sorceress who channels magical forces for the purpose of creation; Cat wants her to become wary of dangers and ruthless in the pursuit of survival; Belasco wants her to serve as his protege and eventual tool for world domination.  Only once Illyana escapes from all of them (mostly by killing or otherwise seriously harming them) does she have enough space to try to figure out at least a little bit what she wants to become for herself.  Even this moment of personal epiphany is cut short because she’s still tasked with defeating Belasco just so that she will be safe, and then following that victory (which Claremont frames as a major moment of temptation that still feels off in its presentation), she has to subsume her identity in order to make herself appear as what she thinks the X-Men who are trying to rescue her from Limbo would find acceptable.  This ending tinges the entire story with an unshakeable element of sadness because Illyana escapes her physical prison, but she still carries major marks that she’s afraid to show to people who ostensibly love and support her (this is a significant motif for a lot of X-Men characters). 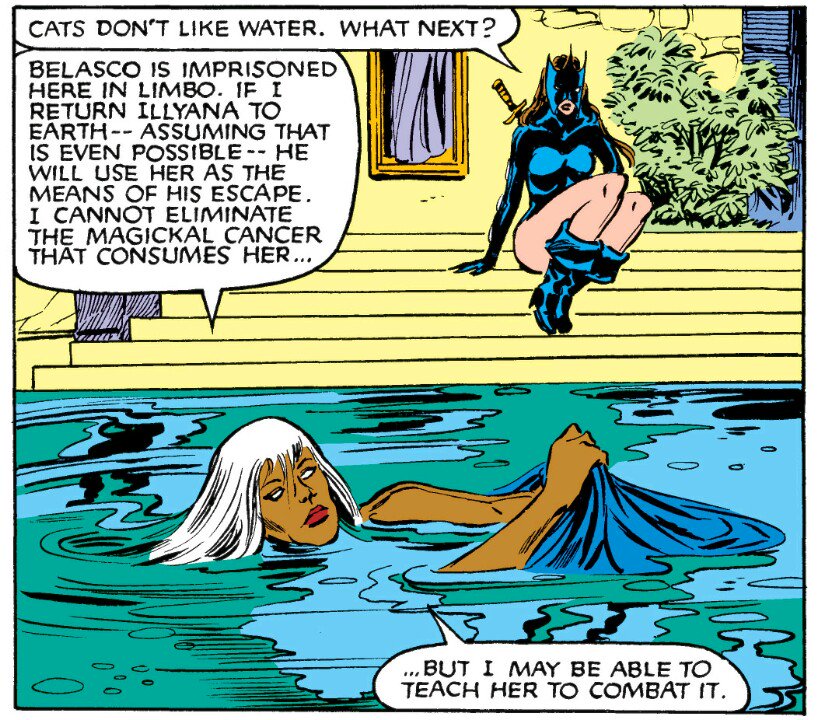 Even when she’s trying to help Illyana, Storm treats the aftereffects of Belasco’s abuse as something alien to Illyana that needs to be expunged rather than a part of her to be processed and integrated into her sense of self. (Pencils by John Buscema, inks by Tom Palmer, colors by Glynis Wein, letters by Tom Orzechowski)

The real world parallel for Illyana’s development is the effect of growing up in a family where abuse happens.  Belasco is the chief abuser because he holds primary power in Limbo, but we see his mistreatment echo through others who would typically be heroes in a less nuanced story.  Storm’s history as Belasco’s previous apprentice has left her with a sense of guilt about her own moral compromises that drives her to overly idolize Illyana’s innocence.  In trying to protect the child, she imposes this template of nurturing creator that simply isn’t a natural fit for Illyana’s developing personality.  It’s the gentlest treatment that Illyana gets while she’s in Limbo, but her recurring angst over being unable to conform to Storm’s ideal (evidenced by her repeated failed attempts to mimic Storm’s creation of an acorn) creates a feeling of instability that undermines Illyana’s ability to reach any kind of equanimity about all the aspects of her identity.  As hard as Storm tries to protect Illyana, she perpetuates the problem in less intuitive ways by reinforcing the sense of shame that makes seeking help from abuse so difficult. 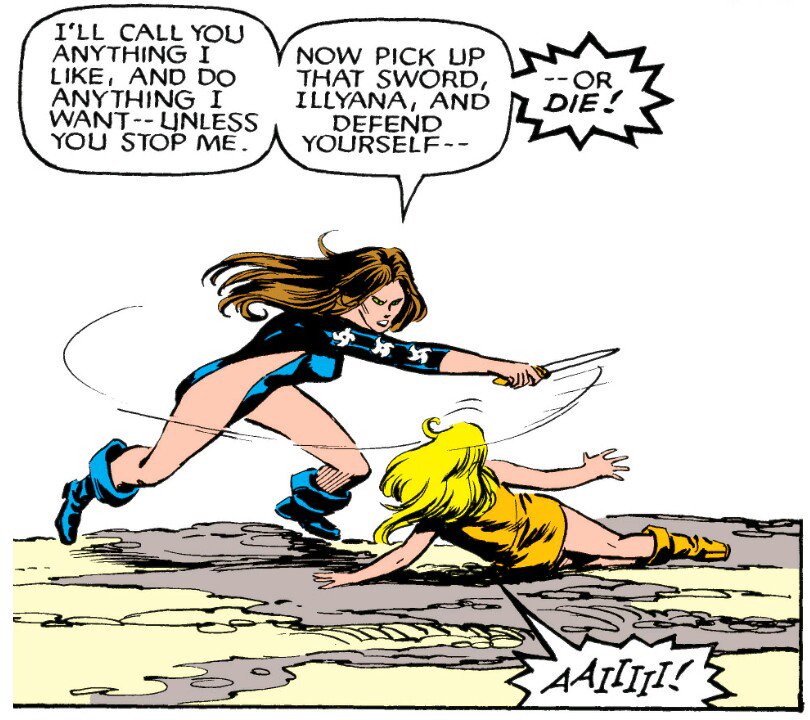 Cat can’t differentiate between training Illyana to survive and actively trying to kill her. (Pencils by John Buscema, inks by Tom Palmer, colors by Glynis Wein, letters by Tom Orzechowski)

Cat’s behavior is more straightforward in its effects.  Unlike Storm, whom we can infer suffered under Belasco’s tutelage for years while she learned magic, Cat appears to be the victim of one traumatic encounter with the demon lord.  He literally dehumanized her in a way that has left Cat feeling ashamed of herself and in a constant hypervigilant state that makes it impossible for her to relate to others in prosocial ways.  She views Storm’s use of magic, the avenue by which Belasco tortured her, as a personal betrayal, and she tries to rescue Illyana from being drawn into the same harmful patterns.  The problem is that Cat fails to see how Belasco instilled other ways to be hurtful into her.  Hey hypervigilance leaves her in a state that’s incapable of recognizing the line between pushing Illyana to improve so she can survive and literally endangering her.  Because this is an adventure story, Cat does succeed in helping Illyana learn survival skills that are necessary for being self-sufficient in Limbo, but she also acts recklessly and places Illyana in greater danger.

At the moment when Illyana’s in full rebellion against Belasco’s influence, she still feels a need to try to reconcile with him in the hopes that he’ll relent. (Pencils by Sal Buscema, inks by Tom Palmer, colors by Ken Feduniewicz, letters by Tom Orzechowski)

Belasco’s own relationship with Illyana is further complicated because he operates very much in the way that intentional abusers typically do: he alternates between extreme cruelty and what appears to be genuine care for Illyana while he teaches her more about the use of magic.  It’s one of the most disturbing aspects of the story as Claremont highlights Illyana’s own confused feelings about her relationship with Belasco.  Like actual victims of abusive relationships, there’s an element of affection that Illyana feels for her abuser which she finds extremely confusing.  This confusion becomes especially uncomfortable in light of the pseudosexual overtones that Claremont adopts in describing Illyana’s feelings about her ongoing corruption under Belasco’s influence.  In a sense it’s unavoidable because we’re looking at a coming-of-age story about a child growing into adolescence, but it does carry unfortunate implications about female sexuality when paired with the textual narrative of demonic corruption and the subtextual narrative of child abuse.

Next time we’ll try to break those connections down a little bit and discuss the cultural milieu that I think Claremont was directly tapping into with this story.