The Magik miniseries ran from the fall of 1983 into the winter of 1984.  That’s the same year that the original Ghostbusters was released and Jack Chick published his infamous anti-Dungeons & Dragons tract, Dark Dungeons (there’s a throwback post for you).  These three things all hail from disparate parts of the pop culture landscape; one was an obscure religious tract detailing the dangers of using one’s imagination, one was a major vehicle for a few of the late ’70s and early ’80s biggest comedy stars, and one (the subject of this series) was a tie-in to a comic that spun off from the Uncanny X-Men right when it was turning into Marvel’s biggest cash cow.  These creative works had nothing to do with each other, but they all feel tapped into a major phenomenon of that era: the satanic panic.

To get an idea of what the satanic panic looked like, here’s a bit from a post by Chaplain Mike over at Internet Monk:

The rise of charismatic Christianity and talk of “spiritual warfare,” along with movies like The Exorcist, fueled a new dualistic supernaturalism among Americans. This was given credibility when we watched the news and witnessed the evil, grisly acts of murderous cults like the Manson “Family” and Jim Jones and the People’s Temple (Jonestown). A “satanic panic” arose in the 1980’s fueled by revelations of “repressed memories” indicating that large numbers of children had been subjected to Satanic ritual abuse (SRA). A new diagnosis of Multiple Personality Disorder looked a lot like demon possession. Christian comedian Mike Warnke made a meteoric rise to popularity, with outrageous claims of having been delivered from Satanism. He told stories that scared the pants off Christian parents and youth alike who flocked to hear him speak and to buy his books and recordings. Preachers engaged in a focused critique on rock music’s occult influence on young people, especially in the “heavy metal” genre. These years saw the rise of the “New Age” movement. Popular Christian fiction writer Frank Peretti wrote best-selling books about “spiritual warfare against a vast, seductive New Age conspiracy” that was taking place in towns like yours and mine.

This account is specifically from a white evangelical perspective, but it still captures the zeitgeist that much of America was feeling in the early ’80s.  The supernatural was real, and it was dangerous, and the worst thing it could do was get to your children.  Dan Aykroyd and Harold Ramis wanted to poke fun at it, Jack Chick wanted to capitalize on it, and Chris Claremont wanted to use it as a backdrop for his version of a “Little Girl Lost” story. 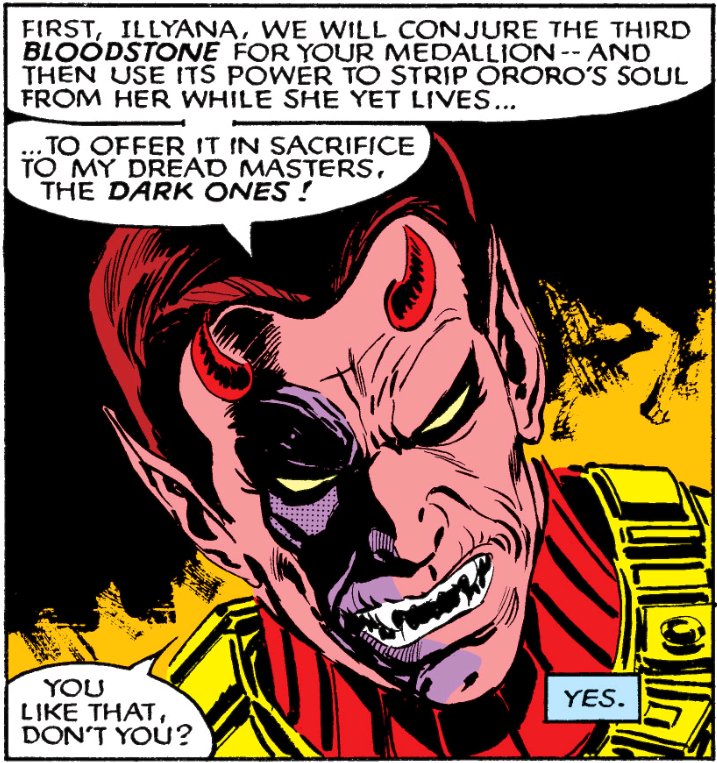 It’s sort of comical how obviously Belasco’s design is cribbed from traditional depictions of the devil. Also, note Illyana’s caption at the bottom of the panel where she admits to herself that she’s attracted to what Belasco’s offering despite knowing it’s dangerous. (Pencils by Sal Buscema, inks by Tom Palmer, colors by Ken Feduniewicz, letters by Tom Orzechowski)

In retrospect, I think it was this evocation of the satanic that really appealed to me when I first read Magik about a decade ago.  In the years immediately after I graduated college I was very deeply immersed in the white evangelical subculture, and while this was the late ’00s, within white evangelicalism we were still in a lot of ways stuck back in the ’80s.  The concept of spiritual warfare, which asserts that all worldly conflicts are also overseen by equivalent conflicts between the forces of God and the devil, was a major aspect of white evangelical life.  It’s easy to see the echoes of this concept descending from the satanic panic of three decades earlier.  The conflict of Magik resonated with other Christian-branded media I consumed at the time like Frank Peretti’s This Present Darkness (published in 1986), which tells the story of a battle between angels and demons in a small town where a New Age cult has infiltrated the community and begun brainwashing people into devil worship.  At the time I didn’t really grok that these different areas of pop culture were related in theme because they were all made in a span of time when much of American pop culture was preoccupied with these motifs.

What all this means for Magik is that while it’s pretty obviously a story about abuse, when I first read it I was drawn to the corruption elements in the story because they reflected the internal struggle that white evangelicals recapitulate for themselves all the time.  When you see the world as being fundamentally a struggle between your baser nature (never forget that the Calvinist idea of utter depravity is the harm that keeps on harming) and the influence of a morally upright divinity trying to exert its influence on you, it becomes pretty easy to relate to the scared little girl who finds herself attracted to the temptations of power offered by the red man with horns and a tail (and only a left arm because who doesn’t love visual coding to reinforce the untrustworthiness of sinister people?) while continually chastising herself for being tempted at all.  Even the final issue’s conclusion, where Illyana sees herself succumbing to Belasco’s influence and choosing to spare him to keep from becoming exactly like him, is fraught with subtext about refusing to engage with the devil using his own methods.  Illyana wins the fight, but her solution for coping with the corruption is to bury it inside her.  In the final pages of the series, she uses her powers to not only escape from Limbo, but to also alter her appearance so that she doesn’t look like she’s just spent seven years in hell.  It’s one last bit of obfuscation to help the X-Men accept her as an innocent victim when she feels at least partly complicit in the changes that have happened to her during her formative years.  Inside she feels depraved, but she puts on a shiny facade in a way that’s highly reminiscent of the ethos of white evangelicalism to never let inner difficulties show because those simply aren’t accepted by the larger community.

There are words to be said about Illyana’s appearance as this story progresses, but I think that will have to wait for another entry. Suffice it to say, her growing horns and a tail are pretty extra for a sequence that’s more satisfying to read as her reclaiming her agency from a long time abuser. (Pencils by Sal Buscema, inks by Tom Palmer, colors by Ken Feduniewicz, letters by Tom Orzechowski)