One last dimension to the Magik miniseries that I want to talk a little bit about (and I’m not sure how in depth this will end up being, but it feels like an integral part of all the other stuff discussed previously) is the fact of Illyana’s experience as a girl.  She’s abused, and she’s corrupted, and these two things really can’t be separated from narratives about the role of women in our society.

I got to thinking about how Illyana being female shapes our perception of her experience because of the analysis that Jay & Miles X-Plain the X-Men did during their coverage of the “Inferno” crossover event which serves as the climax of this version of Illyana Rasputin’s story.  “Inferno,” which happened in the late ’80s, is mostly the story of Madelyne Pryor, Cyclops’s first wife and a clone of Jean Grey, entering into a deal with the demon N’astirh that threatens to turn all of Earth into a hellscape.  Running parallel to Madelyne’s story is Illyana’s; they have a lot in common as morally gray women acting with extreme agency at a time when Marvel’s editorial policy ran heavily towards social conservatism.  The event ends with both women being effectively removed from all the ongoing X-Men stories at the time as Madelyne dies and has her memories absorbed into Jean Grey, and Illyana gets de-aged back to her pre-Limbo seven year old self.  While there’s a lot to unpack about “Inferno,” the salient point that I’m reminded of with regard to Illyana and the Magik series is the use of corruption and demonic influence as coding for both sexuality and societal nonconformity among marginalized groups. 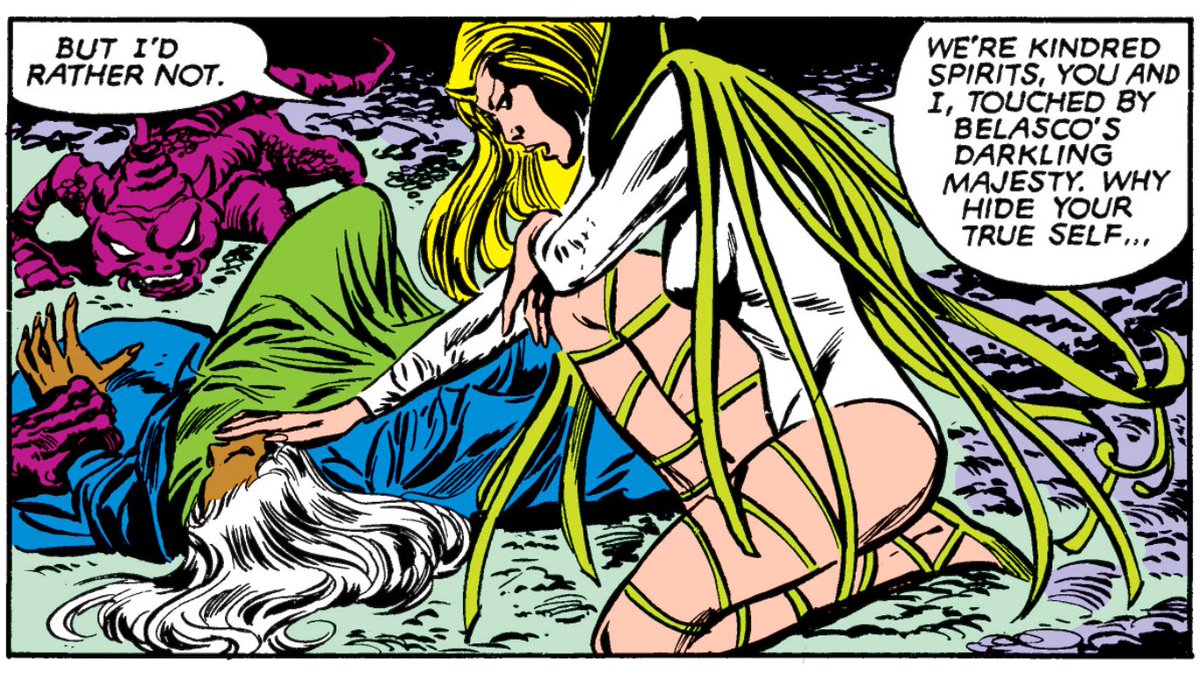 With Illyana, those codings get amplified by her coming-of-age narrative.  This story takes place over the course of seven subjective years, and that passage of time gets reflected most strongly in the way Illyana’s character design develops.  When she first finds herself trapped in Limbo, she’s dressed in a baggy shirt and pants to denote her childishness.  She’s just been pulled into a world where survival is difficult and not assured, and her clothing highlights her young age and lack of preparation.  Under Storm’s tutelage, Illyana wears a long nightgown that emphasizes her innocence in contrast with the corrupted, adult-presenting and sexualized part of her soul that Storm tries and fails to excise.  After Cat abducts Illyana, she dresses the girl in a leotard made of animal skins.  We’re meant to take the wardrobe change as a signal that Illyana must begin to grow up by abandoning unnecessary attachments and niceties, but there’s also a connection between her appearance and Cat’s; Illyana still looks like a child, while Cat, a skilled and ruthless fighter, is sexualized as almost a matter of course.  Cat’s style of resistance to Belasco’s depredations in Limbo is far more physically aggressive than Storm’s, and that aggression gets paired with a more overt sexuality (Storm is also, of course, an old woman in this story where Cat is in her prime).  Belasco’s corruption also manifests explicitly in Cat’s appearance; her face is meant to appear feline (though in effect it’s mostly just sort of alien looking). 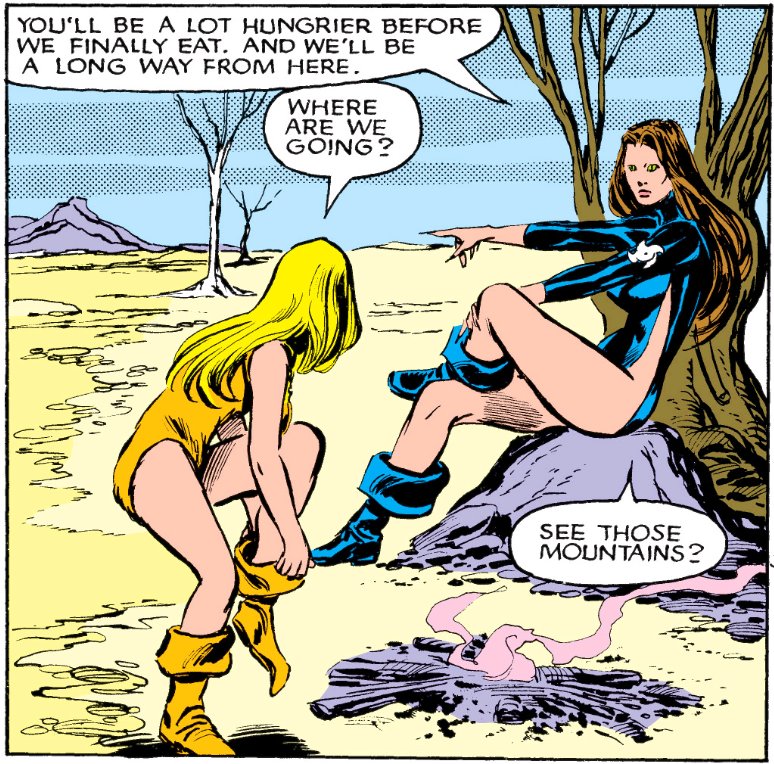 Illyana’s wardrobe change into the leotard is clearly evocative of Cat’s own (highly improbable) outfit, but she still looks like a child. (Pencils by John Buscema, inks by Tom Palmer, colors by Glynis Wein, letters by Tom Orzechowski)

Storm when she had fully embraced the demonic influence looks very different from how Illyana sees her throughout most of the series. (Pencils by Ron Frenz, inks by Tom Palmer, colors by Glynis Wein, letters by Tom Orzechowski)

We even see this pattern reflected in Storm.  Although the majority of the story features her as an old woman who has done everything she can to separate herself from Belasco, a sequence in the third issue where Illyana travels back in time to see the moment when Storm almost deposed Belasco as ruler of Limbo shows her in a highly sexual outfit at the same time that she’s most accepting of demonic influence.  In moments where Storm resists the draw of that power, she’s depicted in flowing robes and hair that hide her body (the one clear exception is the sequence in the first issue where she bathes while talking with Cat after initially rescuing Illyana; this is mostly just a long established thing where if Claremont can justify it, he will write Storm bathing or otherwise going au natural).  There’s a clear connection being drawn between Belasco’s influence, moral compromise, and how sexualized a given character appears.

For Illyana, the leotard becomes her default outfit for the remainder of the series (she’s wearing robes at the start of the third issue, but then she inexplicably changes into her adventurer’s clothes between panels without leaving her bed).  The simple outfit helps the artists delineate how Illyana is aging by showing her features slowly maturing.  By the time of the final issue, Illyana has clearly reached her teenage years, although she remains unsexualized–at least, until the moment of self actualization when she conjures her soul sword.  The leotard has shrunk and ripped so that Illyana sports a bare midriff; she fully fits the mold of an Edgar Rice Burroughs Princess of Mars heroine.  This is where the pattern of corruption and sexualization breaks down, but it’s important to note that in place of demonic influence, Illyana is depicted in scant rags at her moment of clearest personal agency.  The sequence where she finds herself tempted to violently end Belasco as she takes on more demonic features is an extension of the danger of that agency.

Like Storm, when Illyana is at most in tune with Belasco’s corruption, she appears as a scantily clad demon. (Pencils by Sal Buscema, inks by Tom Palmer, colors by Ken Feduniewicz, letters by Tom Orzechowski)

This all gets hammered home most strongly in the post-battle scene where Illyana contemplates how she’s been shaped by Belasco and Storm’s influence.  She stands on the balcony of Belasco’s castle, looking for all purposes like a full-grown woman despite only being around fourteen, and makes the decision to return to Earth.  When next we see Illyana clearly, she’s magicked a new outfit that de-sexualizes her, presenting as still innocent because she doesn’t want to worry the X-Men any more than she knows they already will be. 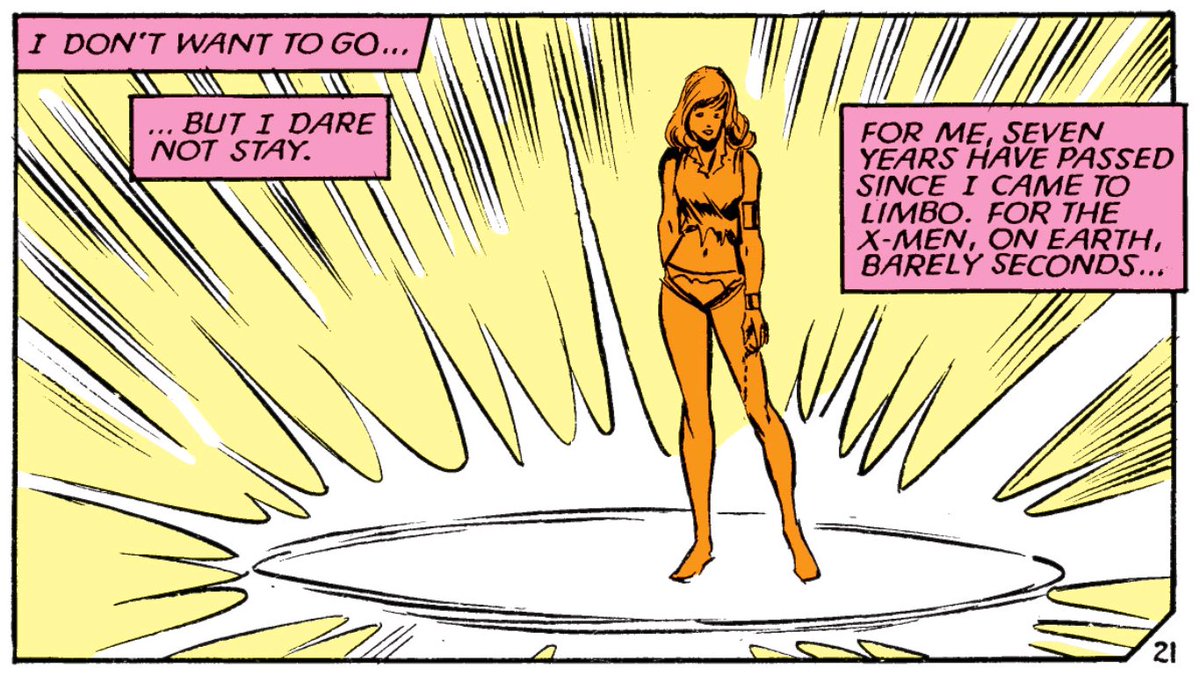 Of course, all the stuff that I’ve laid out here isn’t really that unusual; we’ve been using overt sexuality as a code for moral turpitude in women for pretty much the whole of Western civilization.  In Illyana’s story that same trope gets recapitulated in familiar ways that result in her expressing extreme discomfort with the complete, complex picture of herself.  She’s every teenage girl who gets bombarded with negative messages about their own bodies and desires, just with an extra coat of demonization thrown on top.