Aside from the magazine issue (which, for all its structural novelty and status quo updating, does relatively little to add much dimension to the characters it spotlights in comparison to, say, the Commercial Suicide arc), The Wicked + The Divine has been on a relatively long high action streak from the sustained climax of Rising Action through the first couple issues of Imperial Phase where the emphasis has been on Laura’s erratic doing-without-thinking as part of her ongoing depression coupled with lots of newly established story hooks (The Great Darkness is A Thing! Cassandra has figured out a part of the murder machine goes ‘Beep!’ Woden might not be white!).  With issue #26, we finally have a breather (after the obligatory fight with more Great Darkness creatures, which is actually a much more interesting on a character level than a lot of the previous action has been) and the whole surviving Pantheon gets together to take stock of what’s going on.  It’s really good to see some of the characters who’ve been obscured since Ananke’s death back on panel; everyone gets a really juicy character moment in this issue, and it’s so satisfying in a way that explosions and backflips just aren’t.  I’ve been craving more of Baphomet and the Morrigan’s relationship drama, and it’s never bad to see Dionysus doing his level best to be the good guy that he thinks everyone needs him to be.  Even the characters that I usually don’t get that excited for have really delightful moments (Sakhmet telling Cassandra off for being condescending is way more satisfying than I expected, and I say this as a major Cassandra fan).

The Norns look pretty awesome on this cover; I’m especially taken with the World Tree in the inset covered with something like the threads of fate. (Cover by Jamie McKelvie & Matt Wilson; Image credit: Comic Vine)

Lending to all this overflow of wonderful character work is the issue’s structure; two third of it focus on a meeting of the Pantheon where they discuss their options for moving forward after the revelation that the Great Darkness is one thing that Ananke was apparently telling the truth about, and to help give space to the sheer volume of characters who need to speak in this scene, most of it’s built around a nine panel grid for multiple pages.  Maybe it’s weird to have opinions about panel composition (no, it’s not), but I especially like the work that McKelvie does with facial expressions, and the nine panel structure gives him a really good space to show off how the characters are reacting to what each other is saying with maximal content.  The scene moves at a relatively quick pace, but having just a single focal point in each panel helps the reader slow down and take in character actions as well as words.  That the climax of the scene is when Laura, still committing hard to her Destroyer label, casts the tie breaking vote for anarchy in a splash that totally disrupts the panel grid, is just icing on the cake.  I love this kind of stuff where the issue structure so directly supports thematic elements of the story and characters.

Going back to the opening fight, we get a lot of stuff about Baal and Amaterasu in particular that’s interesting.  Some of it’s new information, like the fact that Baal feels obligated to fight the Great Darkness because it killed his father (there are certainly more questions generated by this fact, like whether the Great Darkness is an intelligent thing that deliberately targets the families of the Pantheon–it seems like Baal’s the only one who’s been victimized by the monsters since literally everyone besides him and Amaterasu didn’t know about it before this issue), and some of it’s just riffs on established character traits (I honestly cannot get enough of Amaterasu being slow on the uptake of popular culture or her affectation for using extremely benign euphemisms in place of swearing); all of it’s interesting and entertaining.  Up to this point, Baal has been a character with some apparent depth that’s just not been explored very much outside of a couple spotlight issues (issue #12, which is ostensibly about Inanna, is way more Baal’s grief following his ex’s murder).  Like with Inanna, whose death serves as a central motivator for why Baal treats Laura the way that he does, we learn here that so much of his dedication to Ananke’s stated mission stems from another traumatic loss.  Baal is all swagger in his public persona, but his two central traits in the story (as the guy carrying a torch for Inanna and the team boy scout) are founded on these major deaths.  Like I noted earlier, I find it odd that Baal is the only one whose family has been attacked by the Great Darkness.  The handwavy explanation from Amaterasu that “It’s a sky god thing” seems too much like a just-so story; it’s awfully convenient that this newly revealed threat is something that only two members of the Pantheon have had to deal with in the year since the Recurrence began.  You’d think Ananke, with her apparent discretion to choose who ascends to godhood, would have tried to build a Pantheon with more sky gods if this were a really serious problem.  I think what I’m trying to get at is that as lovable as Baal is, I can’t shake Woden’s assessment of him from issue #14: “I AM VERY EASILY MANIPULATED!” 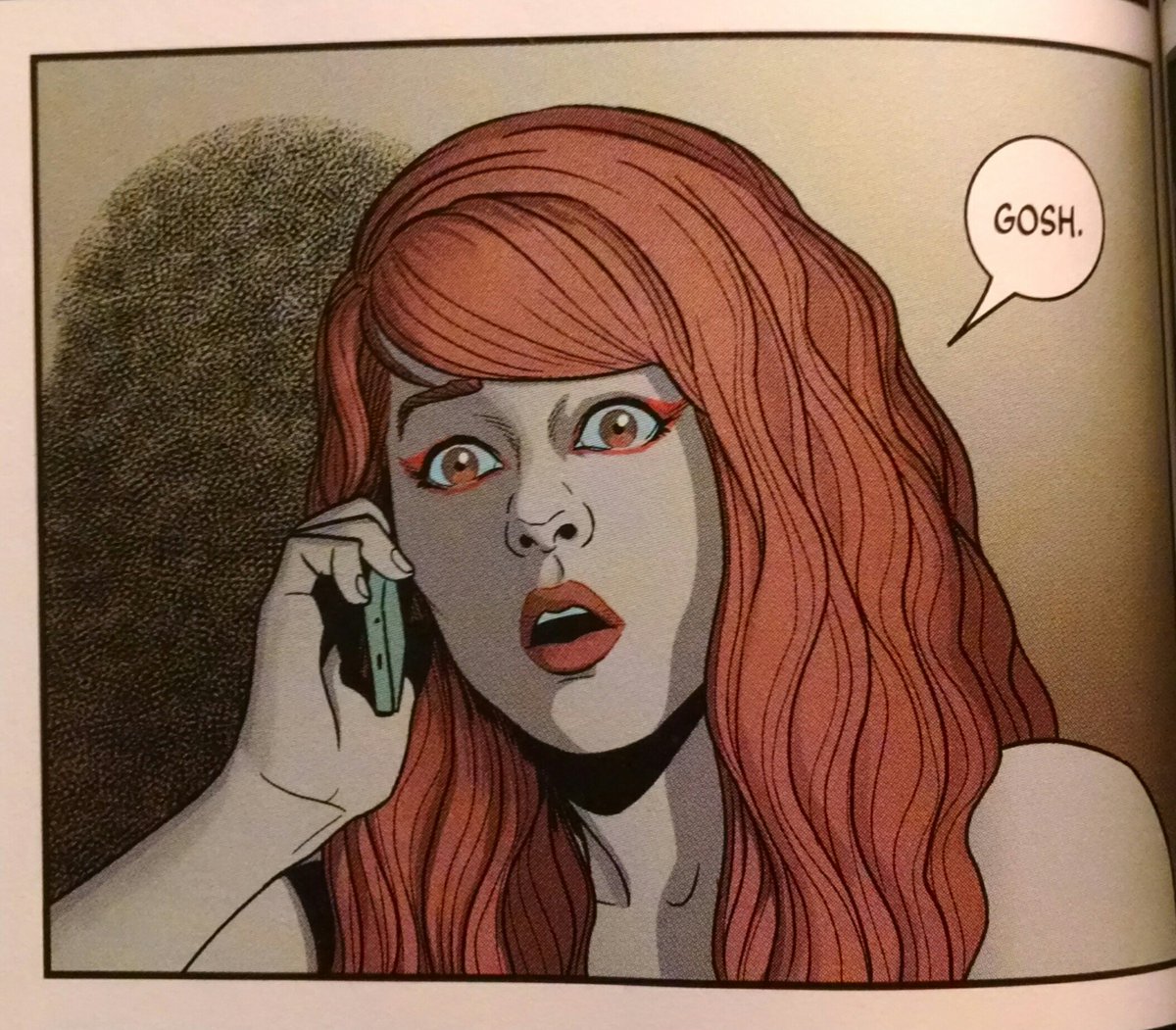 Yes, this is my reaction too when my friends are attacked by relentless creatures of darkness and despair. (Artwork by Jamie McKelvie, colors by Matt Wilson, letters by Clayton Cowles)

As for Amaterasu, I just find her entertaining when she’s in cutesy mode (as opposed to her scary, oblivious white girl aspect, which leads to such wonderful things as manifesting a sunburst over Hiroshima and appropriating the heck out of Shinto without considering that she just might not be the best representative for a religion with a long tradition entirely centered in Japan).  Her delighted exclamation that she just figured out it’s the humans who are the Walking Dead (at a time when The Walking Dead was around its peak popularity and everyone else had long figured out the show’s premise is about people being horrible to each other in the middle of an ongoing apocalypse) makes me chuckle every time I read it.  I get this is probably mean spirited; my educator instincts urge me not to shame people for being slower on the uptake than others around them, but Amaterasu’s entire demeanor is a special combination of privileged and oblivious that just makes her so easy to deride.  The tricky thing is parsing out the parts of Amaterasu’s personality that are an innocuous preference for affected girlishness (who says, “Gosh,” in response to news that supernatural monsters are attacking their friends?) from her very harmful repose in whiteness.  In a cast full of characters who all have some horrible aspects to them, she’s probably one of the most difficult to pick apart without being unfair (this seems like it’s always the case with characters who are both privileged and just not smart; attacking intelligence or a lack thereof always drifts quickly into ableist territory, and that’s really not something I’m interested in doing).

Other small moments that are worth noting, even if I’m not going to discuss them too much at this particular moment include: Dionysus comes out as asexual to Cassandra after backing her up rather inexplicably at the Pantheon meeting; Cassandra briefly discusses her own sexuality and we learn that she’s in a dominant/submissive triad with the other two Norns (perhaps not all that surprising, Cassandra is the sub; given how hard she goes trying to manage everyone around her, it makes sense that she’d seek a relationship where she doesn’t have to be the responsible one); and the dynamic between Baphomet and the Morrigan has shifted where she appears to be calling all the shots between them. 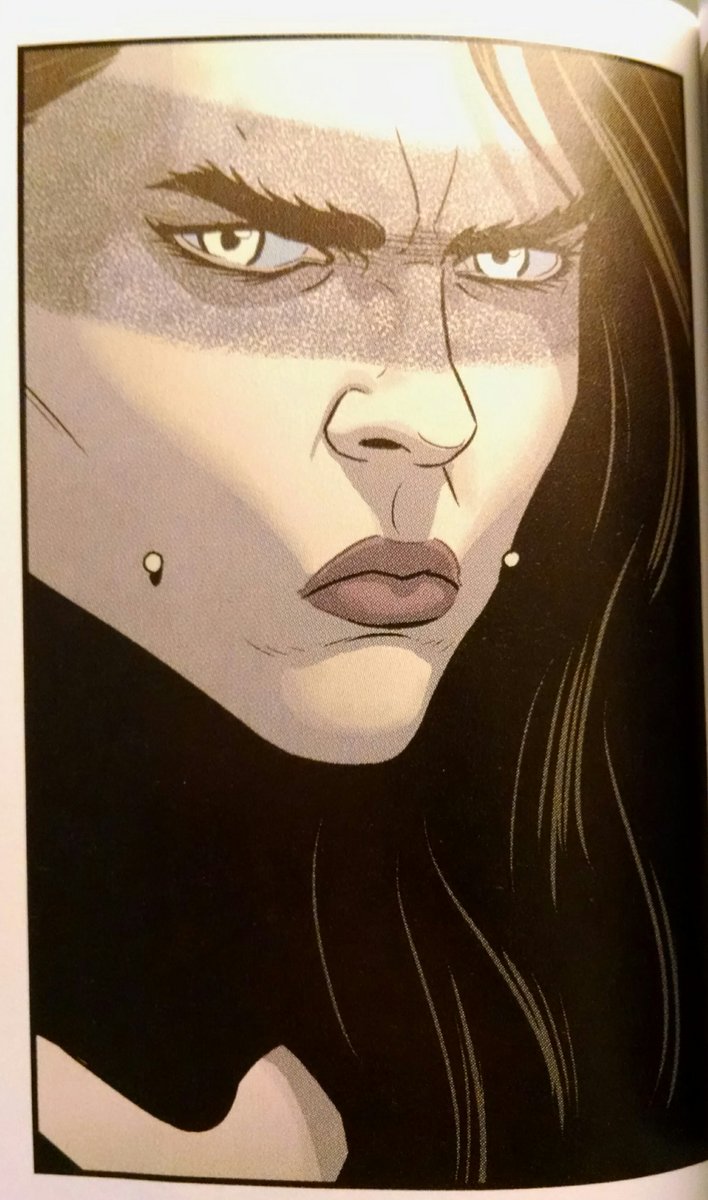 The Morrigan is perpetually pissed at Baphomet here, and she’s not even manifesting Badb. That’s how you know it’s bad. (Artwork by Jamie McKelvie, colors by Matt Wilson)