A few months back I did a pretty in depth analysis (found here, here, here, and here)of the 1984 Storm and Illyana: Magik miniseries that Marvel used to explain the origins of Illyana Rasputin as a teenage mutant sorceress.  It was a pretty fun project because Illyana’s one of my favorite characters from the X-Men franchise and she serves as an excellent nexus point for exploring how trauma and cultural touchstones contemporary with their creation inform the development of characters and influence how they can be read.  Even better, Illyana is part of a long tradition of X-Men characters who come into their own in the aftermath of extensive trauma that’s centered around the intersection of their real world marginalizations with the manifestation of their powers in the context of particularly insular and controlling communities.  Within that tradition is a particular subset of characters whose origins put them in direct conflict with their faith community of origin; Illyana doesn’t precisely fit into this mold (she hails from a farm collective in Soviet Russia, so she presumably would have been raised atheist) although she acts in tension with broad American Protestant sensibilities as someone who feels thoroughly ambivalent about her connections with magic and a literal hell dimension.  Other significant characters who do fall into this subset include Kurt Wagner (although his devout Catholicism wasn’t fully developed until later, it complements his origin story as a Bavarian circus acrobat who was saved from a mob of superstitious villagers by Professor Xavier); Rahne Sinclair; and, most recently, Idie Okonkwo.  There are likely other examples that I’m forgetting, but these three come most readily to mind because a core facet of each of their characters is the rejection by their faith community of origin because their powers are viewed as demonic manifestations.  Of these three, the one that I’m most keenly interested in at the moment is Idie.

What I find fascinating about Idie is that she carries several additional markers of marginalization beyond the ones associated with Kurt and Rahne.  Although these two characters have powers that partially present as traditionally monstrous physical features (Kurt’s blue fur, tridactyl hands and feet, and prehensile tail; and Rahne’s ability to shape shift into various mixtures of a human and lupine form) they also are able to assert white eurocentric racial privilege (Kurt may or may not use an image inducer to hide his fur, but he’s never mistaken as anything other than a white German).  Idie originates from a small village in Nigeria where the manifestation of her powers is particularly volatile, causing everyone to flee and a local militia to trap her in her village’s church until she’s rescued by Ororo Munroe and Hope Summers.  On top of the dimensions of mutant identity, fundamentalist faith background, and female gender expression, Idie as a character also contends with the legacy of colonialism in Africa and racism at large.  The sheer number of intersections makes her a fascinating character to explore, but one additional feature that enhances her interest is her relative newness as a character.  The other characters discussed here have publication histories extending back at least to the ’80s, but Idie was created in 2010.  She’s appeared in less than a decade’s worth of stories, but the number of transitions and developments she’s gone through in that time are comparable to other, much more storied characters. 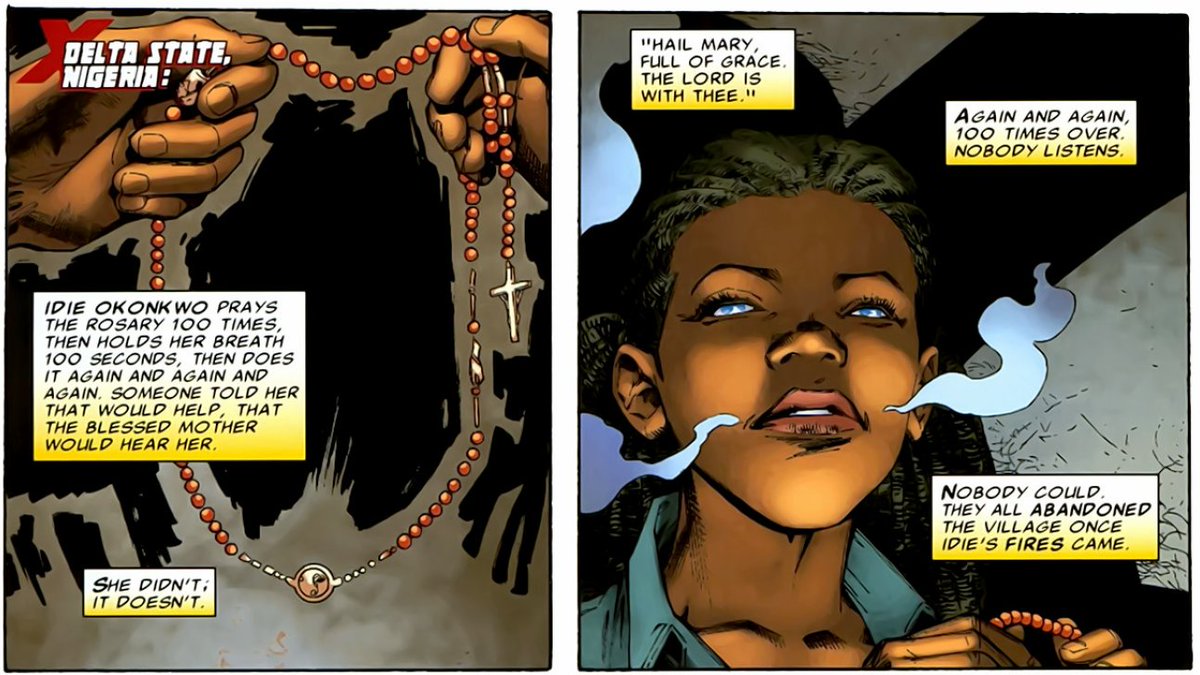 We meet Idie in the middle of her praying for help. (From Uncanny X-Men #528, written by Matt Fraction, pencils by Whilce Portacio, inks by Ed Tadeo, colors by Brian Reber, letters by Joe Caramagna)

From the beginning, Idie’s identity is steeped in her religious upbringing; she takes refuge in her village’s church when her powers manifest where she prays for help from Mary and her patron saint.  Immediately coupled with this core aspect of Idie’s identity is the concept that she’s also been abandoned by it; neither God nor Idie’s community will be sending her help.  Later in the issue when Ororo and Hope arrive, Hope makes a point of trying to disassociate their assistance with any sort of supernatural aid, which makes sense for Hope but likely carries some deep implications for Idie and her faith (especially considering that Hope’s connection with Idie and the rest of the Five Lights during the “Second Coming” era of X-Men was particularly strong with messianic and apostolic overtones; but that’s best explored elsewhere).  Carrying forward from this introduction, Idie develops some severe self loathing with regard to her powers. 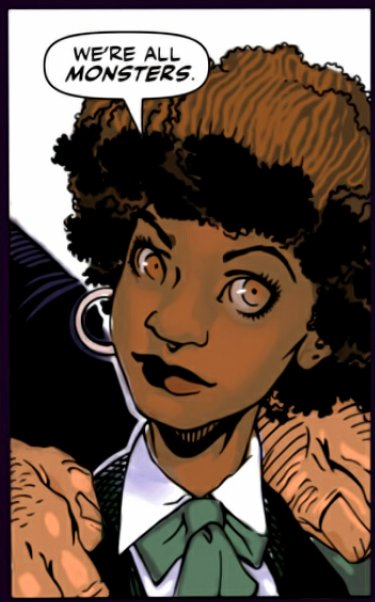 Well then. (From Wolverine & The X-Men #1, written by Jason Aaron, pencils & colors by Chris Bachalo, inks by Jaime Mendoza, letters by Rob Steen)

By the time we reach the first issue of Wolverine & The X-Men, Idie has acclimated to life in America, but her opinion regarding herself and her classmates hasn’t improved.  While Logan and Kitty Pryde are busy trying to persuade representatives of the state board of education that their school meets all the requirements for accreditation, Idie explains matter-of-factly to the visitors that all the students at the Jean Grey School are monsters, herself included.  Idie goes on to be a regular character in this series, and her subplot revolves extensively around her exploring various aspects of her identity in some normal and not-so-normal teenage ways (she begins dating Quentin Quire and also gets involved with a pseudo-Christian cult that wants to help her with her spiritual journey “to peace and damnation”).  It’s this series where Idie develops much of the personality that makes her so endearing; in the aftermath of the cult episode (if I remember correctly, they’re connected with the Purifiers, a religious anti-mutant hate group who are frequent antagonists of the X-Men) Idie starts to explore an identity that isn’t bound so closely with her faith community.  In a lot of ways she reflects the experience of people who have been shunned by communities that they didn’t want to exit in the first place.  The resilience and rebuilding of identity that’s not centered solely on a faith resonates.

In the most recent series where Idie’s appeared (that I’ve read; I admit I’m not totally up to date on X-Men books these days), she’s arrived at an equilibrium with regard to her past and her present circumstances.  In All-New X-Men Volume 2, Idie has joined the time displaced young versions of the original five X-Men, Laura Kinney, and Evan Sabah Nur to go road trip around the country doing superhero stuff instead of being bogged down in all the turmoil between the Inhumans and mutants since the release of the Terrigen cloud.  This is an Idie who’s become more comfortable with herself, although she still carries some of the weight of her past (as if it could go any other way).  We see her embracing her fun side much more, developing a strong friendship with young Bobby Drake and helping him meet guys as he begins to explore his sexuality after coming out as gay.  Besides helping her friends though, Idie gets to have her own personal adventures, as relayed in a story about her from All-New X-Men Annual #1: she goes on a date with a boy she meets in a town where the X-Men have stopped to relax, and in the course of their date discovers that he’s a mutant who’s been infected by the Terrigen.  Idie gets to shine as someone with significant confidence and self control as she defends her date from bullies and call in Ororo to help rescue someone else whose powers have gone haywire.  The whole story’s a nice capstone on Idie’s arc since her first appearance. 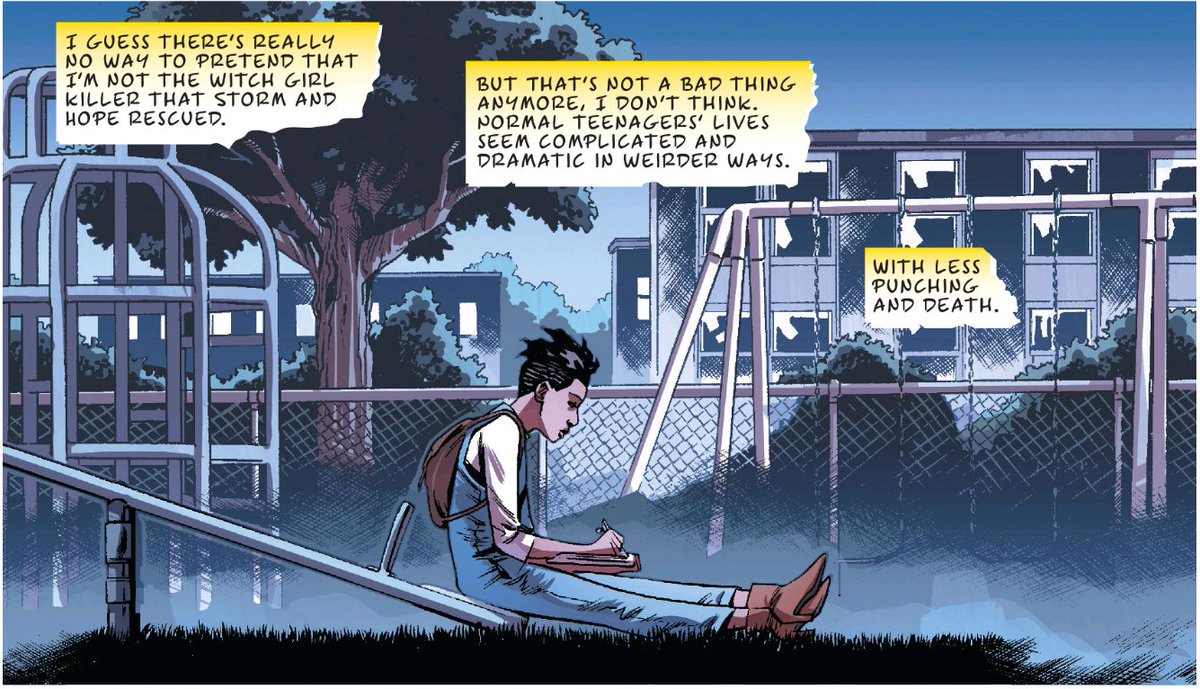 Idie reflects on her date after everything’s been settled. (From All-New X-Men Annual #1, written by Sina Grace, artwork by Cory Smith, colors by Andres Mossa, letters by Cory Petit)