If I have learned anything from The Wicked + The Divine and My Little Pony: Friendship Is Magic, it’s this: never trust adorable young characters with Shirley Temple curls.  After all the revelations in the last issue, you would think that the follow up might be throttled back just a little bit to save some surprises for later in the arc, but that would be a mistake in this particular case.  It’s important to remember that Gillen has kept a lot of details about Ananke’s nature and agenda obscured for most of the series, so there’s plenty of material to spool out as things proceed in an orderly fashion towards doomsday.

The cover for this issue features, unsurprisingly, a figure from the Pantheon’s past: the 1923 Minerva.  Given that we know the 2014 Minerva is totally untrustworthy, it’s not a far leap to figure that the earlier incarnation isn’t either.  That this cover opts for a variation of the straight on head shot format (Minerva looks down her nose at the camera, blood spatters and a sneer on her face) that revels in contradictory juxtapositions.  This Minerva takes inspiration from Shirley Temple, a famous child actor of the 1930s who was known for being adorable; unlike her real life counterpart, she’s also a ruthless murderer (if you read the 1923 special, you know that Minerva killed Set when no one was around to witness the execution) and master manipulator.  So much of The Wicked + The Divine has been about misdirection and forcing readers to question their assumptions about characters that a cover showing a major figure from the last Pantheon with a murderous gleam in her eye honestly shouldn’t be surprising.

Exit Ananke as we spotlight in this issue… Ananke. (Artwork by Jamie McKelvie, colors by Matt Wilson, letters by Clayton Cowles)

The flashback for this issue gives us the actual conclusion to both the 1923 special and the flashback from the series beginning in issue #1 (a fun bit of trivia is the fact that McKelvie, having significantly refined his drawing style in the intervening three years, decided to redo the first four pages despite them being panel for panel identical to #1’s opening sequence; if you poke around on Twitter you can find where he posted the juxtaposed pages to show how much his style has changed).  We know from the special why the four remaining gods, Susanoo, Amaterasu, Amon-Ra, and Minerva, are preparing to blow themselves up; Ananke has explained to them that they need to sacrifice themselves in order to undo the ritual that several of the other gods had carried out to try to bend the zeitgeist towards their preferred future.  It becomes apparent here that that story was just a manipulation; Minerva defends herself instead of completing the suicide pact, and she uses Susanoo’s bewilderment at her apparent screw up to decapitate him. 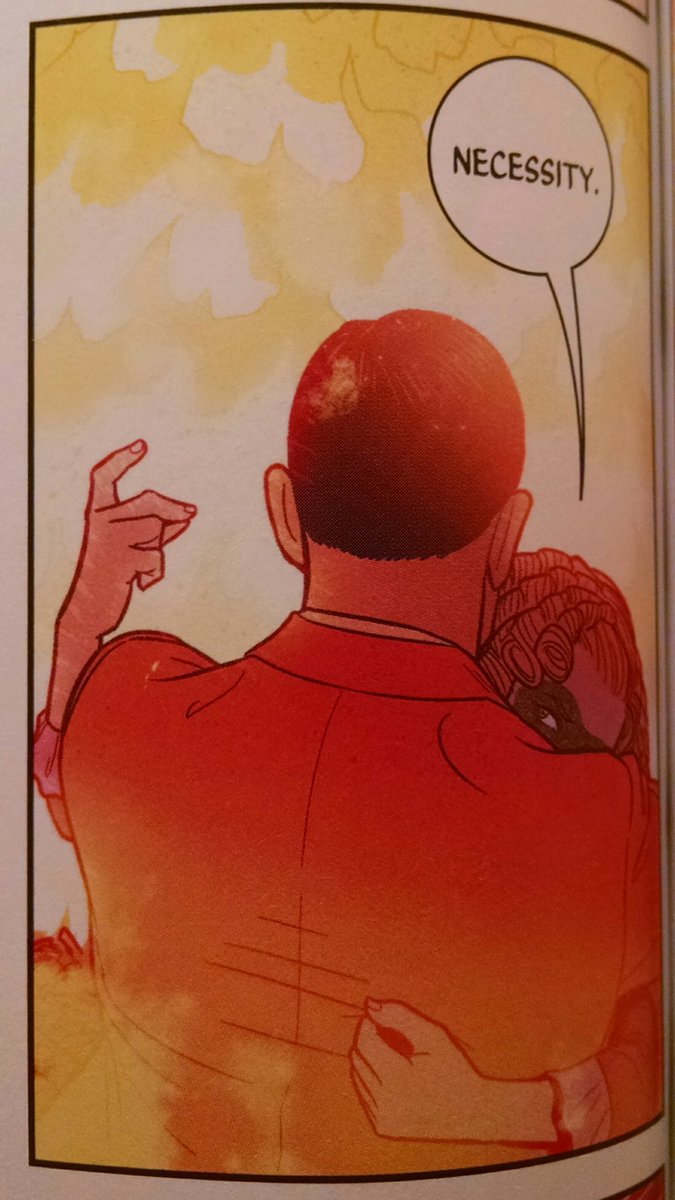 Apologies for the bad quality; it’s hard to photograph trades without hurting the spines. Nonetheless we do what we must. (Artwork by Jamie McKelvie, colors by Matt Wilson, letters by Clayton Cowles)

This is the major revelation of the issue: we finally get to see the ritual that Ananke has devised to maintain her immortality firsthand.  The first thing that becomes apparent is that this is a far uglier thing than anticipated.  That Ananke sacrifices the godheads she collects isn’t so surprising; what is surprising is the beneficiary of the ritual.  Instead of Ananke the old woman, whom we’ve seen across all the Pantheons that have appeared, it’s Minerva who completes the ritual and absorbs the power of the godheads.  In 1923, the ritual is preceded by Minerva summarily executing Ananke against her protestations.  It’s not a “steal the gods’ lives so you can live forever” deal; it’s a “steal the gods’ lives so your younger incarnation can live until the next Recurrence” deal.  The somewhat mysterious utterance by Minerva at the end of #33 that she is Ananke now makes sense.  Ananke is both the maiden and the crone in each Recurrence; the rules of the game of stories begin to come into sharper focus.

Immediately we can begin to recontextualize a number of previous scenes, particularly those moments between Ananke and Minerva that suggested a relatively tender relationship.  Before it was easy to imagine that Ananke was just offering small comfort to an especially young victim of the Pantheon’s curse, but now they take on a more sinister tone.  The job of the elder Ananke is to shepherd the gods towards their deaths while making sure the younger Ananke remains safe and unsuspect in the eyes of everyone else.  Apparently each incarnation of Ananke has the memories of her predecessors, but their consciousnesses are distinctly separate once the younger appears (each Ananke’s origin still remains a mystery at this point).  The whole sequence in 1923, particularly the moment when Ananke murders her older self to make sure the ritual can be properly carried out, throws into sharp relief the flashback at the end of Imperial Phase Part 1 where we see elder Ananke (the same person as the 1923 Minerva) writing a letter to her younger self explaining how she accepts that she’ll probably need to die in order for their plan to succeed.  There’s also a reference in that letter to the Great Darkness, although at this point it’s still unclear what that precisely means to Ananke ( we do know, tantalizingly, that Ananke prefers death to allowing the Great Darkness to happen).  It’s a relatively small thing, given that all the Anankes inherit their predecessors’ memories, but the contrast between Ananke as an old woman in 2015 and her as a child in 1923 underlines a sense of aging and progress within each iteration; that direct life experience, however, doesn’t necessarily transfer between bodies (both Minervas are far more cunning and unsentimental in the execution of their respective plans than their elders are).  There’s a slowly dawning horror that Ananke’s ritual, instead of granting her immortality, has instead trapped her in a cycle of rebirth where she repeatedly has to experience death at her own hand without her children ever understanding what’s been done until it’s too late.  It’s like the Great Danton’s fate at the end of The Prestige, if you’ve ever seen that movie. 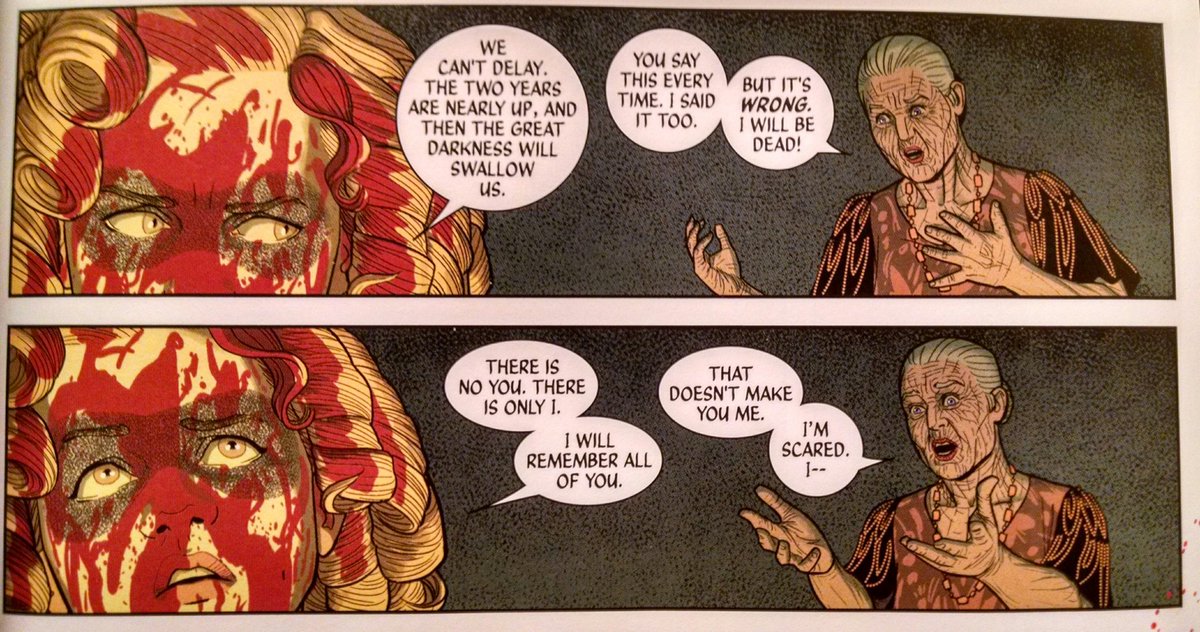 There’s so much going on here. Too bad it gets cut short. (Artwork by Jamie McKelvie, colors by Matt Wilson, letters by Clayton Cowles)

It feels anticlimactic after discussing the gradually clarifying relationship between Ananke and Minerva to jump to 2015, but there are revelations to be had here too which impact the way we see previous events in the series.  Besides Minerva suddenly being revealed to be a young Ananke with six thousand years of experience rattling around in her brain (no wonder she’s been posing as the goddess of wisdom), we also have some new insights into Baal.  Specifically, it turns out he actually isn’t Baal Hadad, a lightning god; he’s really Baal Hammon, the sun god that Cassandra mentioned way earlier in the series as the figurehead of a cult that actually did practice child sacrifice.  After Laura discovers Baal’s own secret room in Valhalla, we find out that it wasn’t just his followers who did the dirty deed.

But that’s something to discuss more in depth next time. 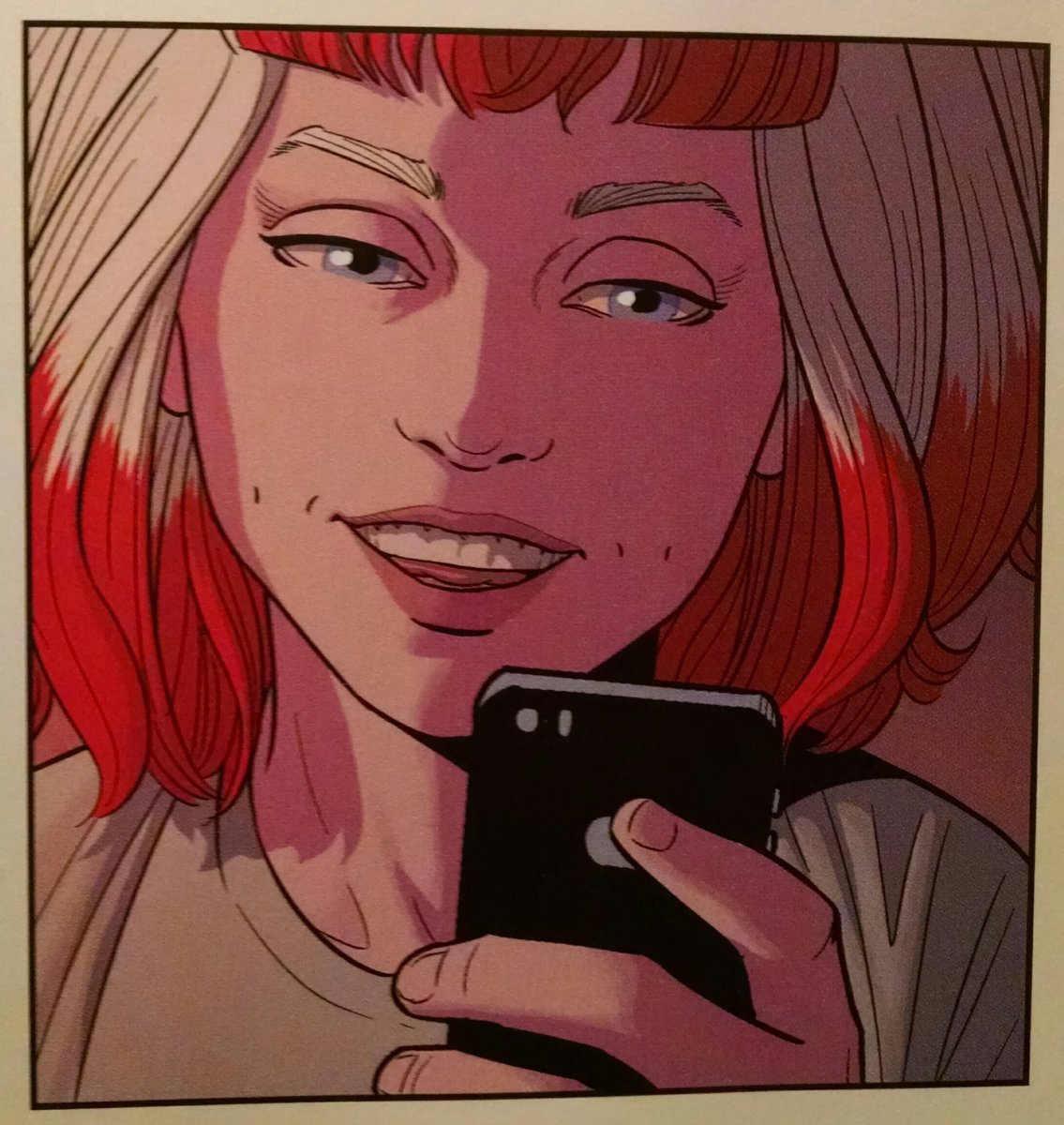 There are so many great Minerva faces in this issue, and I had to pick one to end on. I went with Minerva being pleased that she’s still manipulating everyone successfully. (Artwork by Jamie McKelvie, colors by Matt Wilson)