It’s hard to think of a way into this issue.  Like with most of the issues of this arc, the structure splits space evenly between a flashback that fills in significant details of Ananke’s life and a focus on what’s happening in 2015.  The Ananke portion is the first of two sort of structurally odd sequences that Gillen and McKelvie use to anchor the macro level arc of Ananke’s origins.  We’ll look at the second one in the next issue and the first one after we talk about the cover.

Don’t get attached to this character; she won’t be around long. (Cover by Jamie McKelvie & Matt Wilson; Image credit: Comic Vine)

This issue’s cover is a weird one.  It features a woman bearing iconography that immediately suggests she’s one of Epithymia’s gods.  We can recognize the skulls in the pupils and the flower and vine motifs that are Persephone’s signature features in 2015.  Beyond these recognizable features, the woman has long straight hair and kohl around her eyes (we find out on the second page of the issue that she’s from a Pantheon situated in the Upper Nile region in Egypt, so this isn’t that surprising).  I remember there being a lot of speculation back during the lead up to this arc’s publication about whether this cover was supposed to feature the first Persephone, and, well, it’s definitely a Persephone, but I’m kind of befuddled in retrospect that it wasn’t more apparent to folks that Epithymia’s portrait was actually the original.  The skull motif is quite prominent on that cover, although maybe that feature alone isn’t so obviously connected to Persephone (skulls are sort of ubiquitous in the Pantheons).  Either way, this is not the first Persephone (we’re still roughly four thousand years BCE with this character, so I’m pretty sure Persephone hasn’t yet been conceived of). 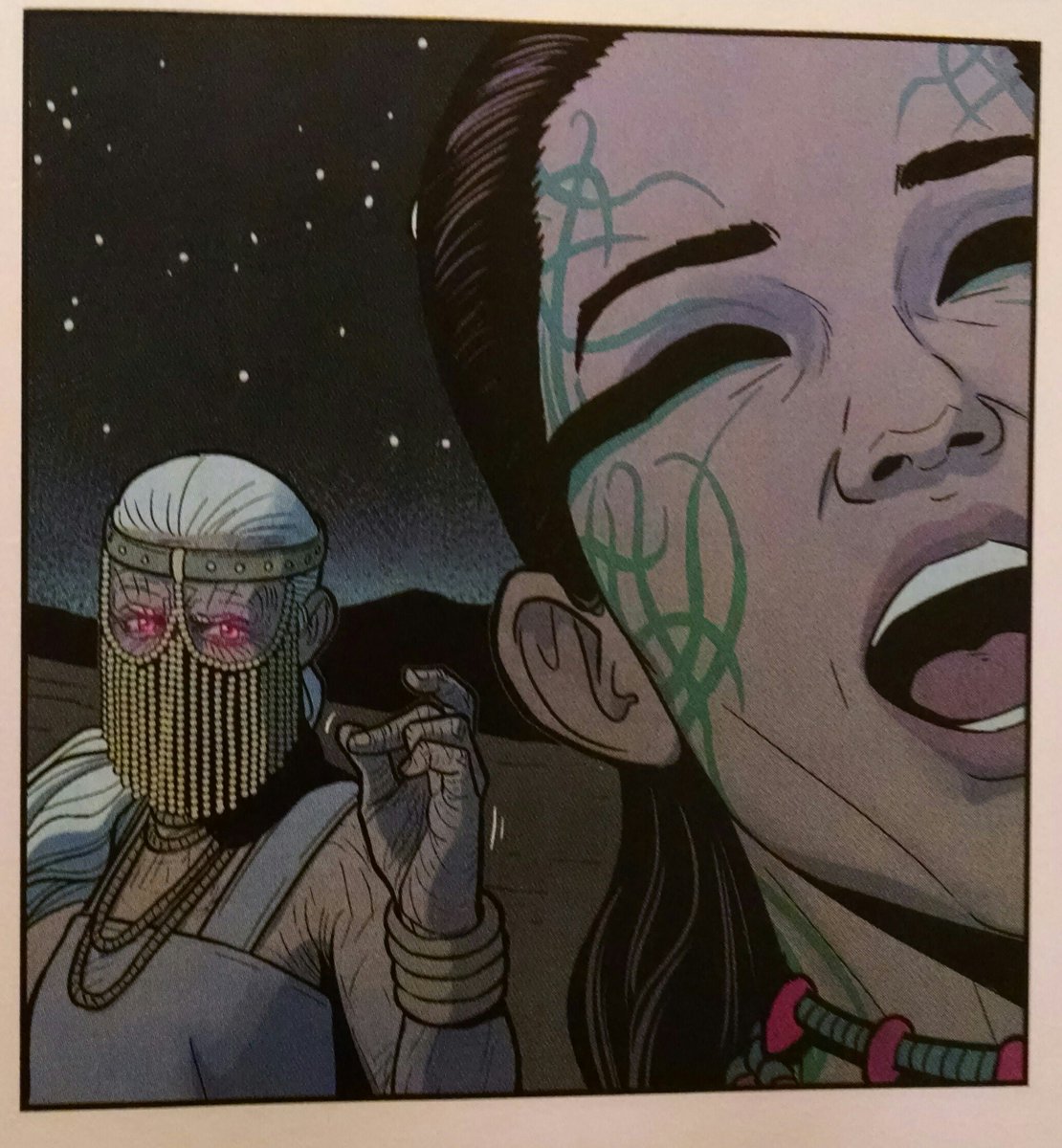 We’ve seen this scene before. Ananke’s seen it dozens of times. (Artwork by Jamie McKelvie, colors by Matt Wilson)

Regardless of all the speculation about who this cover character is supposed to be, one thing is imminently clear as of the first page turn of the issue: it doesn’t matter one way or another.  What Gillen and McKelvie have done in this issue is highlight the moment of Epithymia’s god ascending in every Pantheon since the first.  Over eleven pages we see sixty five reunions between Ananke and her sister’s avatar.  In the production notes for the trade, Gillen explains that the creative team hired a fashion historian to help McKelvie design the clothing for each time period and locale.  It’s a massively ambitious structural project designed specifically to convey the sheer span of time that Ananke’s been operating in conjunction with the relatively rote repetition of a key moment in each cycle.  According to the rules that Epithymia set back in issue #34, we know that her god is always the last to ascend in each Pantheon, and we know that Ananke has to collect four godheads to complete her immortality ritual at the end of each Recurrence.  Beyond that, we’re left to fill in the blanks surrounding sixty-five panels highlighting a climactic moment in every Pantheon (I mean, aside from the very first one; that first murder was just Ananke stabbing Epithymia with her stone knife; no magical decapitation necessary).  The way each scene plays out follows three broad models: Ananke surprises the Epithymia god and steals their head without difficulty, the god suspects Ananke’s intent and retaliates with varying levels of success (the most spectacular is definitely the one where Ananke has inexplicably lost her lower body as the god flees off panel; there are also a couple times when the god successfully kills Ananke, although we know that her younger incarnation finished the job later), or most peculiarly Ananke has a heartfelt reunion.  There are trends over the course of the pages where sometimes Ananke has a reunion multiple Recurrences in a row and other times she fails to get the drop on Epithymia’s god for several centuries.  We get small implied stories, like the lifetimes where Ananke’s body gets ravaged by disease or injury, or when her younger self has to carry on with the elder’s work.  One of my favorites that I picked up on my most recent reading of the issue is the slow arc of Ananke learning how to protect herself from attack once she realizes that she can’t always count on Epithymia being fooled.  Still, the ultimate effect is to emphasize the cyclical nature of Ananke’s life; she lives forever (sort of), but it’s constantly bound by violent confrontations.  I figure the times when she doesn’t immediately murder Epithymia is because she’s already collected enough heads and can afford to luxuriate a little in remembering who she gave up in her bargain for longevity.  There’s just a hint of sadness to Ananke’s existence, although when you consider the sheer number of people she’s murdered over the course of her life (every panel in this issue times twelve, and that’s only the gods, let alone the normal folks who accidentally got in the way), it’s hard to sympathize with her particular plight. 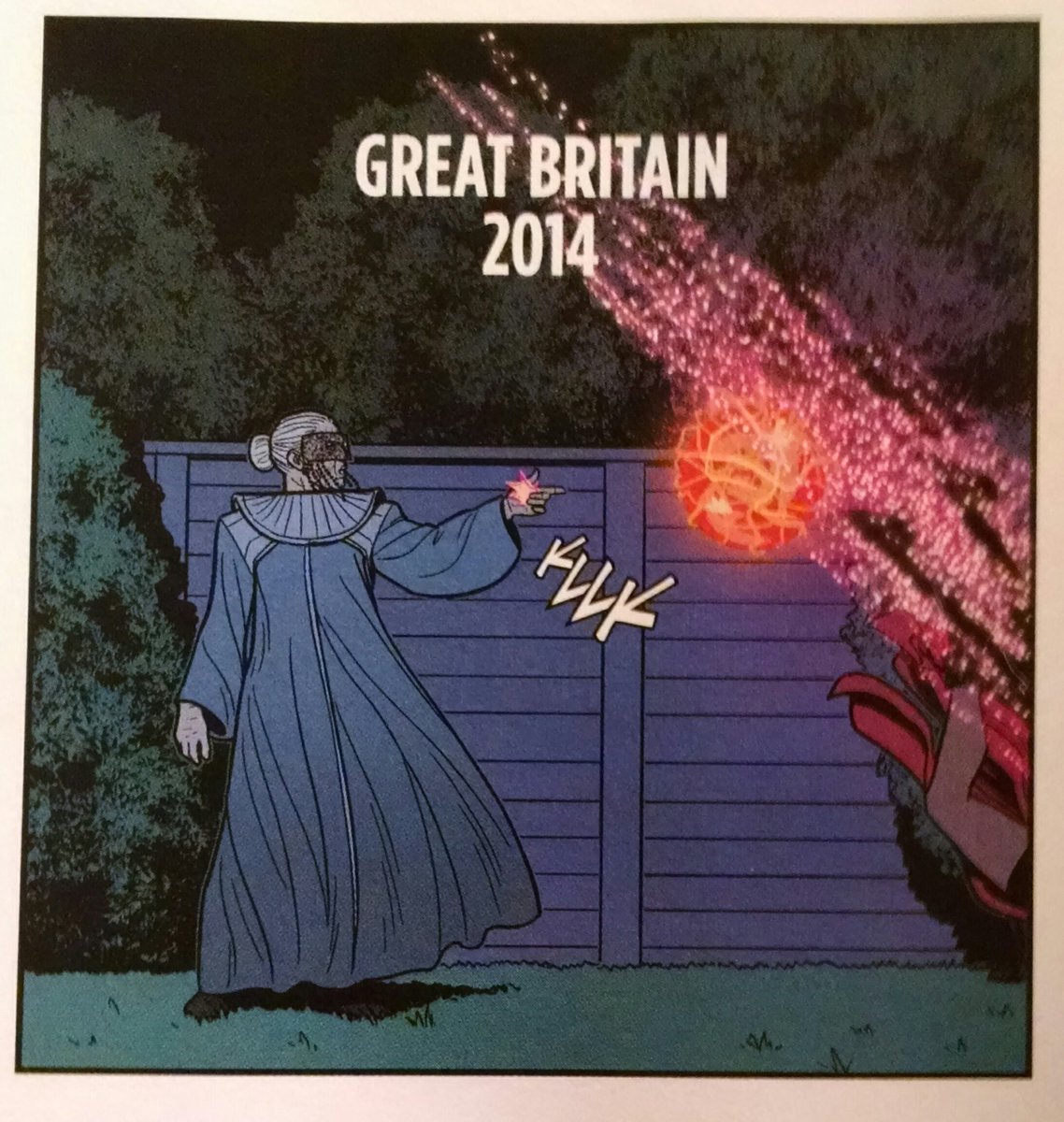 There’s a lot of time between the earlier panel and this one, but they might as well happen one right after the other for all the difference there is between Ananke now and Ananke then. (Artwork by Jamie McKelvie, colors by Matt Wilson, letters by Clayton Cowles)

Flash forward to 2015, where we last left off with Baal revealing that he’s actually the child-sacrifice, fire-from-the-sky Baal, not the lightning-in-a-bottle Baal.  Laura, Baal’s captive audience, listens as he explains his own origins and how Ananke persuaded him to charbroil little babbies.  What it essentially comes down to is that Baal, who rightly finds killing children to be totally repugnant, decided it was necessary after the Great Darkness killed his father.  The story that Ananke spun for Baal was that sacrificing children would keep the Great Darkness at bay temporarily while they worked on finding a long term solution.  Once he lost something personal, it was an easy sell.  Now, the weird black tentacle beetle monsters that we’ve been calling the Great Darkness still haven’t been fully explained.  Given what we’ve been learning about Ananke in this arc, I don’t think it’s much of a reach to assume that the Great Darkness is a ruse that Ananke has been using to manipulate the gods into doing what she wants.  With Baal committed to doing actual child sacrifice, Ananke developed an extremely dedicated foot soldier; it’s no wonder that Baal is on the wrong side of pretty much every fight in the first half of the series when you consider that he’s totally bought into Ananke’s narrative.  All it took was killing a family member.

A fun exercise is asking myself how many times the small sympathy Ananke builds gets squandered when she does something horrible. This is one of those moments. (Artwork by Jamie McKelvie, colors by Matt Wilson, letters by Clayton Cowles)

While we’re talking about children, this issue also has one last surprise for us in the form of Laura’s big news that she briefly alluded to back in issue #34: she’s pregnant, and she doesn’t know who the father is.  Because he’s just a great big Baal of anxieties and guilt, our child murderer lets Laura go instead of burning her down with the rest of Valhalla to protect his dirty secret.

All joking aside, Baal gets a seriously raw deal here, and the fact that he totally commits to his own moral degradation for the sake of his family, likely for no good reason, is one of the most tragic story beats in the whole series. (Artwork by Jamie McKelvie, colors by Matt Wilson, letters by Clayton Cowles)