Way back in issue #9 there was a bit where Ananke, in the course of her interview with Cassandra, explains that she was the inspiration for the Robert Graves book The White Goddess.  In the real world, this book has a reputation as a poorly researched history of ancient myth that proposes an archetypal goddess figure from which most ancient religion descended.  In The Wicked + The Divine, it’s Graves’s interpretation of Ananke’s history after she spent a night getting drunk in his home and explaining her whole life story.  It’s exactly the kind of relatively obscure thing that Kieron Gillen would pull into his own story’s mythos as a convenient explanation for why no one in a world with observable gods would take the thing more seriously.  This issue finally helps clarify that little incident in more detail, but it mostly goes over my head.  I’m sure if I were more of an ancient mythology nerd I would be able to speak more intelligently about the whole White Goddess thing and how it interacts with what Gillen’s doing here.  As it is, I’m mostly just amused to see Ananke living a relatively normal life in the decades between Recurrences with the occasional bid for recognition of her clandestine greatness.

The coloring’s the star on this cover. There’s a sort of noirish feel to everything with the dust motes and the slatted shadows, like Ananke’s just walked into some private eye’s dingy second floor office. We don’t really get any of that inside the issue though. (Cover by Jamie McKelvie & Matt Wilson; Image credit: Comic Vine)

The cover of this issue shows Ananke as a woman in her thirties dressed in 1940s English fashion.  In the whole lineup of covers it stands out as an odd one because it doesn’t match any of the styles that are contemporary with the Pantheons we’ve seen, and there’s almost nothing to indicate that we’re looking at a god.  The lavender eyes, matched to the color of the hat and dress, are a small signifier if you’ve noticed that purple is the color of Ananke’s eyes (a feature that only emerges after each Minerva completes her ritual and absorbs the power from her victims); another small nod to the fact we’re looking at our chief antagonist is the veil on the hat–Ananke does love her masks, even if they’re only symbolic in nature.  The most interesting feature of the portrait is the necklace Ananke wears of a snake; though it’s mostly been obscured, the signature icon of Ananke’s power is a bright green snake striking (that moment in issue #34 when we see the snake manifest as Ananke stabs her sister to death is pretty indelible).  You get all the classical Christian associations of snakes with untrustworthiness plus a nod towards the archetypal supervillain color scheme of purple and green (and without having to actually put any green in the composition) wrapped in one package. 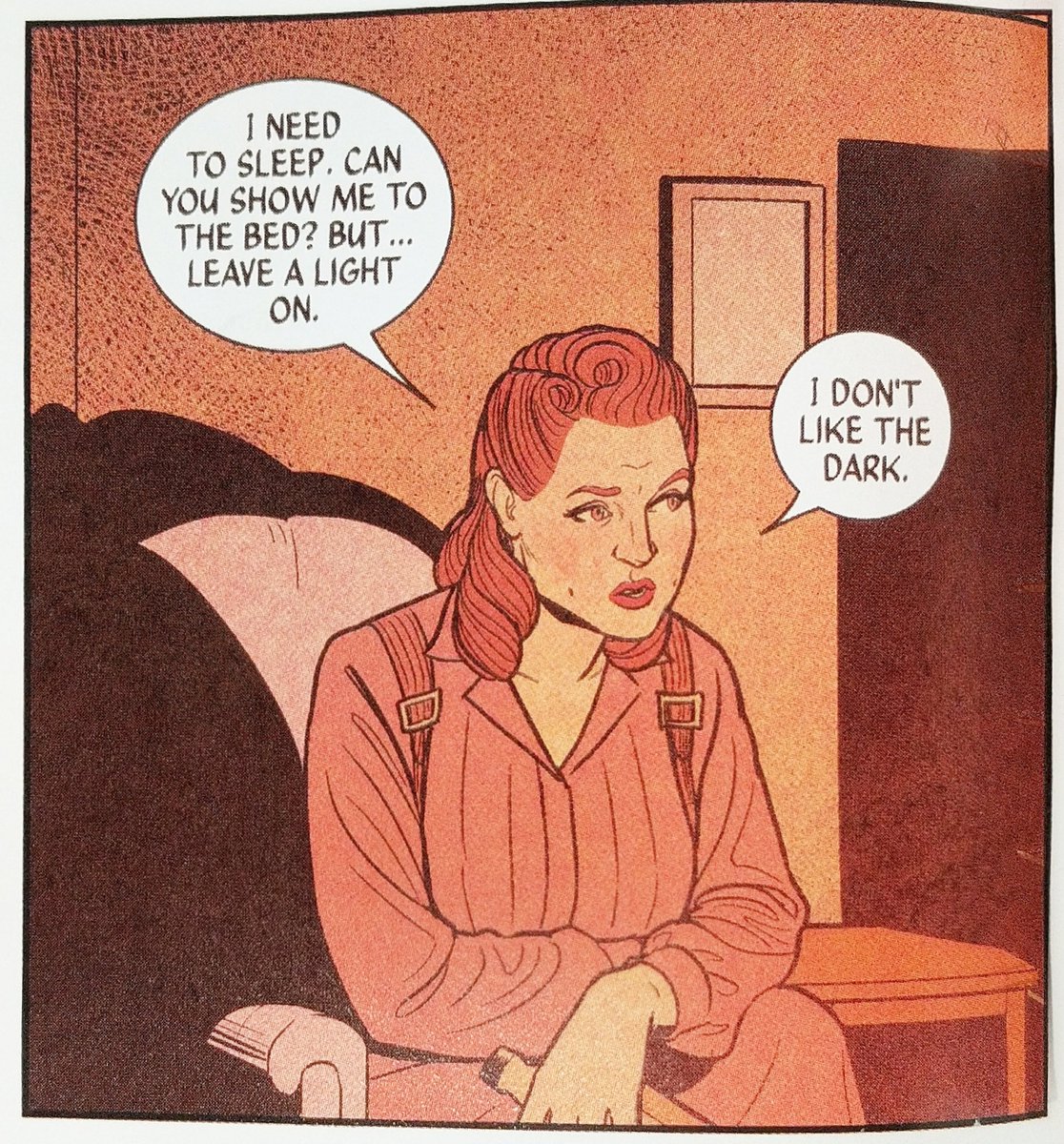 “I don’t like the dark.” is going to be the one thing that helps me maintain a shred of sympathy for Ananke–at least until I get to the last historical special. (Artwork by Jamie McKelvie, colors by Matt Wilson, letters by Clayton Cowles)

Setting aside the Ananke stuff here (I don’t have much to say about what we learn in this issue; she needs to vent to someone, picks a dude who ignores most of what she has to say, and then is unhappy with the result; also, Minerva’s “parents” were just a couple whom Ananke duped into the whole scheme to cover up the fact that her younger self just appears fully formed as  tween when the Recurrence begins), the more interesting bits happen with Laura in the fallout of the Morrigan’s death and Cassandra after she’s been locked up for being, well, a Cassandra.

With Laura, the Morrigan’s death, and more specifically Baphomet’s reaction to it, give her some insight into the whole messy situation with the Pantheon.  Baphomet (or Nergal, as he finally drops the Crowley act seeing as Laura’s pretty much his only friend left alive) is so caught up in the patterns of his toxic relationship with the Morrigan that even after she’s died he can’t conceive of doing anything that doesn’t revolve around her.  As Laura’s suggestion he carries her body back to their home in the Underground, and while Laura takes in just how much the couple committed to their LARPing, he decides that he’s going to spend his remaining time finishing the shrine to the Morrigan that they’d already begun.  Baphomet’s been utterly hollowed out by his girlfriend, and with her dead there’s nothing left for him to do but hold on to her memory.  His advice to Laura to just not do anything he’s doing resonates more strongly than he probably intends.  Laura’s major moment of epiphany in this issue (she’s been having a lot of those in this arc) comes when she finally makes a decision about, well, a lot of things.  Cassandra’s divination at the issue’s end resulting in no hits on the cosmic search for Persephone suggests that something drastic has happened, although we don’t know what.  The impression I got the first time I read this issue wasn’t that it was anything like suicide (which much of Laura’s narration seems to imply).  It took me a while to figure out why that was, as I was re-reading, but I realized the significant event as Laura proceeds along her internal journey in this issue’s second half is the decision to switch from her fancy (and busted) Eleusinia phone back to her old pre-ascension phone with the cracked screen. 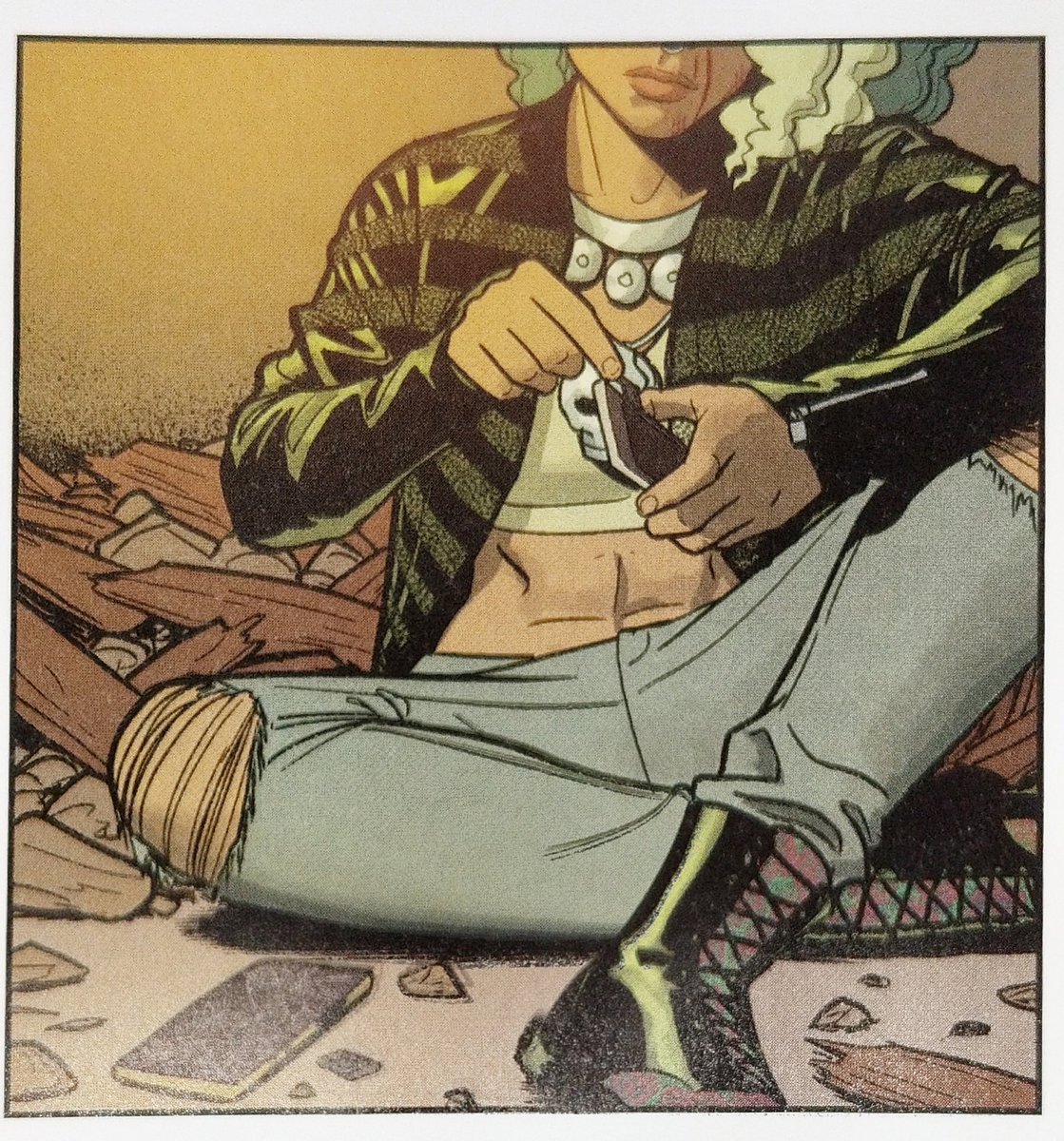 This moment matters a lot, but we won’t see why until next issue. (Artwork by Jamie McKelvie, colors by Matt Wilson)

As for Cassandra, the important bit here is her determination that despite being extremely angry with Laura for all the self-destructive stuff she’s done over the last six months, they are still friends, and Cassandra is going to honor that.  It doesn’t do a whole lot to improve her situation as Woden’s captive, but it’s a long way from the detached, in-it-for-herself attitude she took when Laura first asked her to get involved in the investigation of the judge’s murder.  Cassandra is someone who really needs friends, and I’m glad she’s finally realized that (I’m also glad that she decides to cooperate when Verðandi is directly threatened; there’s very little shown of the Norns’ relationship, but I like to think that overall they’re in a very loving and devoted triad and that’s extremely important to Cassandra). 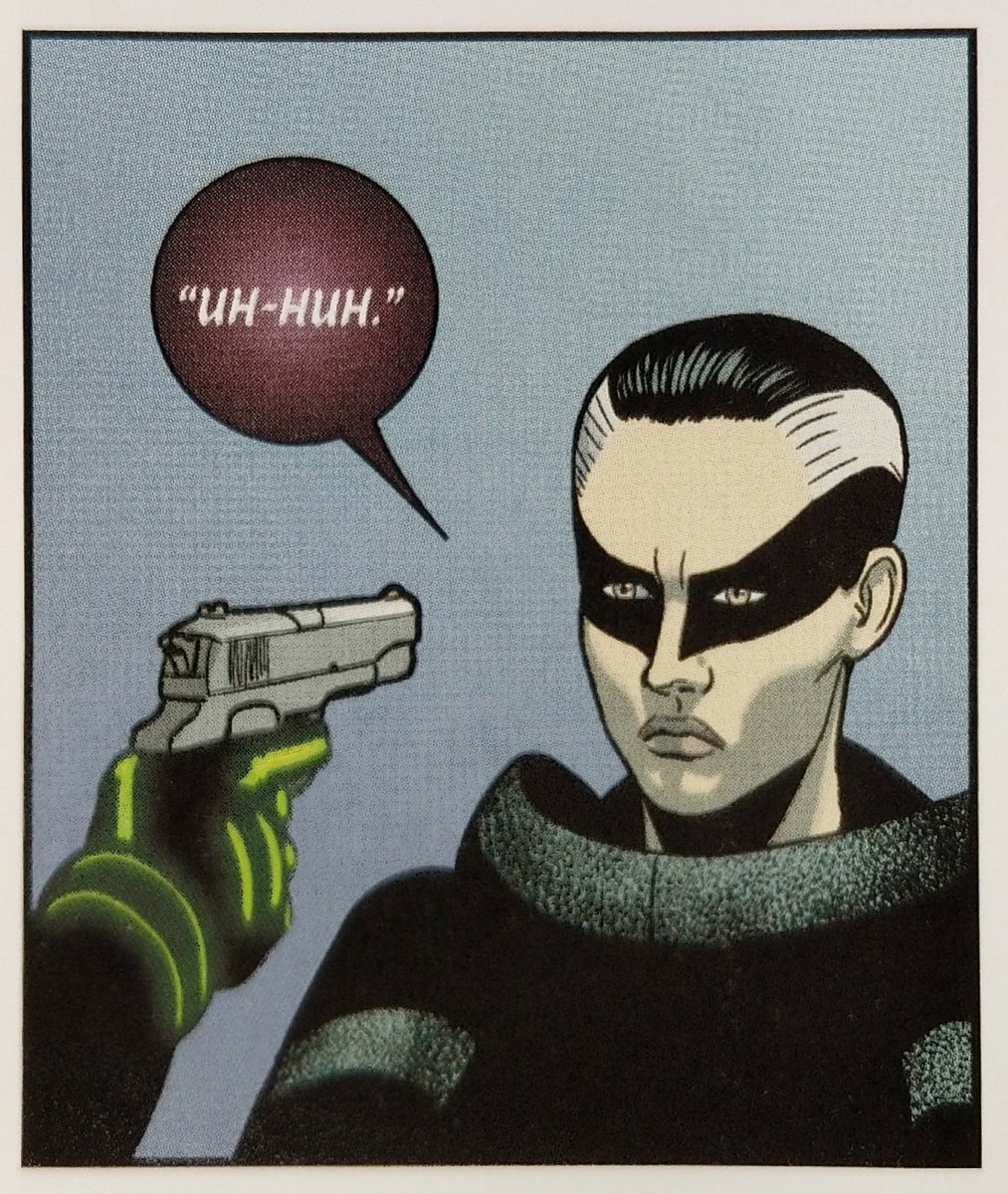