This issue feels a little weird in comparison to previous issues that conclude story arcs.  There are the macro beats that we’ve become accustomed to with the end of each WicDiv arc: we get a couple of significant revelations, a major question left to be answered, and the status quo of members of the remaining Pantheon shifts to match the developments of the arc.  What’s a little unusual here is just the number of scenes that Gillen packs into this issue.  The structure that he’s used to organize each issue of this arc has been built around two broad movements, one focusing on a part of Ananke’s history and the other pushing the story in 2015 forward.  Unlike in previous issues, where the flashback sequence is front loaded to give more context to the present day happenings, this issue intersperses scenes from Ananke’s final encounter with her sister (we still don’t know her actual name, so I’m going to continue calling her Epithymia) between the present day developments with Laura, Minerva, and Woden.  It’s understandable why there’s a shift in the broad structure of the issue (the reveal in the last section of the flashback is necessary to renew hope in the reader and work towards reversing some uncomfortable implications that are set up by the latest development in Laura’s story), but it makes the issue feel very frenetic in comparison to everything else in this arc.

The cover continues the arc’s ongoing motif of featuring either Ananke or an Epithymia god featured in the flashback sequence.  Here, we get a portrait of the original Ananke in her 4000ish BCE outfit, replete with cow skull mask and vibrant purple eyes.  She’s splattered with the blood of her victims (in a delightful bit of coloring continuity, the pattern of blood splatter in this portrait is the same as when she appears at the very beginning of issue #34 before killing Epithymia) and looks ready to add another to her tally.  This is a very different portrait of Ananke from the one on the cover of issue #9.  The imperiousness is still present (it’s probably just an illusion, but I always feel like Ananke’s looking slightly down at the reader in her portraits), but the blood and the bone accessories make her feel far more immediately threatening than she seems in her 2014 fashion. 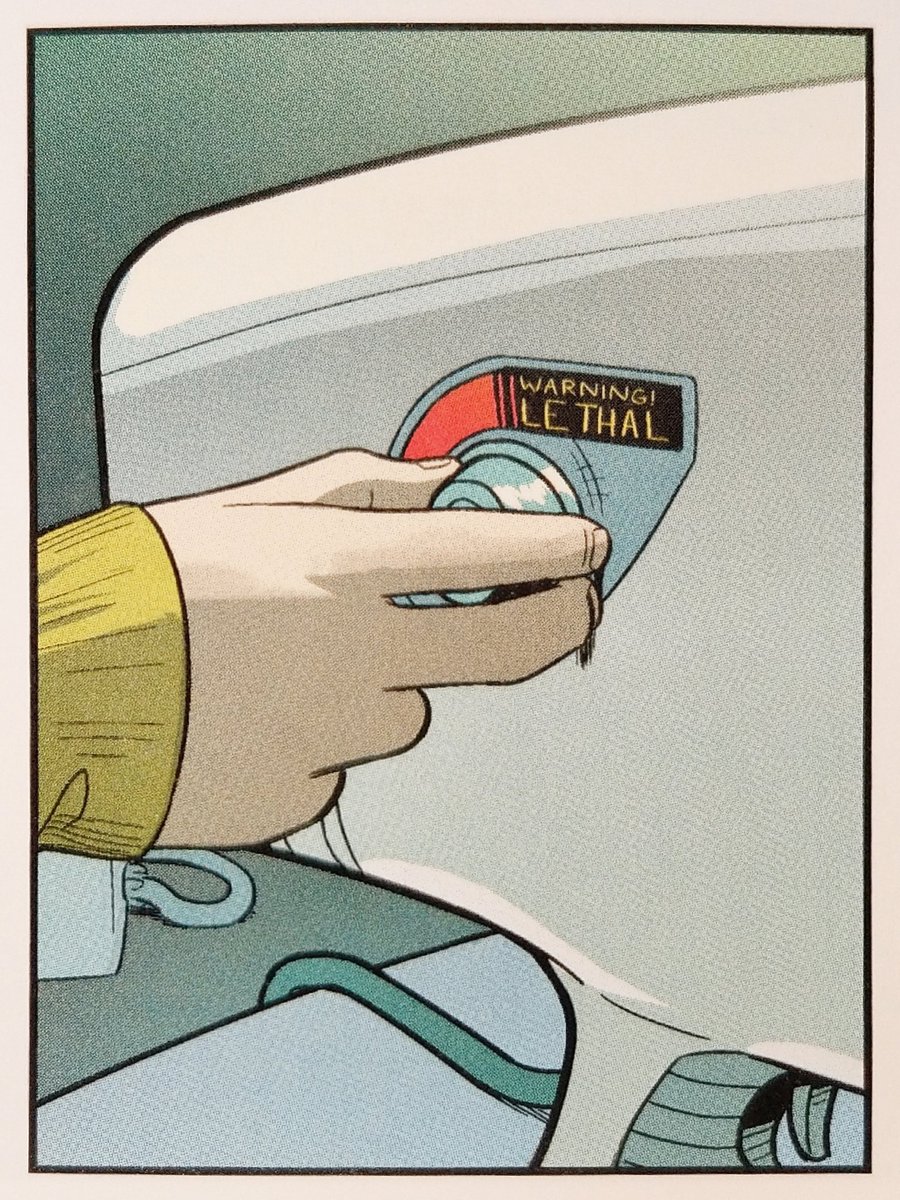 I know it’s a big gun, but how does no one notice this? (Artwork by Jamie McKelvie, colors by Matt Wilson)

The big revelation for this issue is that Epithymia, in a bid to trip Ananke up at some point in the future, just straight up lies to her about the final rule to be set in their story game.  As she dies, Epithymia declares that if her god ever has a child then the cycle will be broken.  Ananke takes this idea and runs with it, speculating that if the Epithymia god becomes a mother in her own right, then that breaks the maiden-mother-crone cycle, so of course it makes sense.  It also explains why in the present Laura’s being pregnant is a really big deal that brings Minerva to obsess over killing her as quickly and violently as possible.  What we find in this issue is that the decision Laura made last time relates to a number of things: where it seemed like she might be deciding on suicide, what actually happened is that she has decided to reject all of the labels she’s accumulated over the course of the series.  The result is an as yet inexplicable descent from godhood; when we catch up with Laura in this issue she’s shed the Persephone persona completely and also aborted her pregnancy.  That doesn’t change the fact that Minerva is utterly determined to eliminate all possible threats, and Laura almost gets beaten to a pulp anyway by Beth’s documentary crew (Beth, for anyone who may have forgotten because she only shows up sporadically, is an original member of Cassandra’s documentary crew who struck out on her own after she got fired for tipping Baal off to Laura and Cassandra’s location when they were still investigating the judge’s murder), now outfitted with Woden-crafted super suits in exchange for doing the bidding of the Pantheon’s ascendant evil faction.  It’s sort of comical how reckless Minerva is in her machinations; she turns the very obvious power dial on the stun gun Woden gives Beth all the way up to lethal, and I can only assume the reason no one notices the large flashing red light on the side of the gun is because Beth and her crew are not very observant–a pretty unfortunate trait for documentarians in general.

Me too. (Artwork by Jamie McKelvie, colors by Matt Wilson, letters by Clayton Cowles)

While it gets dispelled as a point of tension here, Laura’s pregnancy hangs heavy over this whole arc (it is called Mothering Invention after all), and there are some complicated things to sort out in relation to it.  Gillen constructs a story where the reader feels invested in protecting Laura’s pregnancy precisely because it seems to be a major threat to Ananke and then he resolves it by having Laura choose to terminate the pregnancy, all before we learn that the whole plot point is a ruse and irrelevant to Ananke’s potential downfall.  In those five pages between Laura explaining she had an abortion and the flashback where Epithymia explains her gambit to her grandson, the reader’s left in a really awkward position (one that Laura herself calls the reader out on because, remember, she’s gone back to breaking the fourth wall in her inner monologue captions).  Laura’s pregnancy was clearly something that Ananke was worried about, and anything that legitimately worries Ananke is probably a positive for the fate of everyone caught up in the Pantheon nonsense, but at the same time we’ve been brought to having an interest in a woman carrying a pregnancy she has only expressed ambivalence about.  Gillen anticipates that there might be some anger directed towards Laura in that liminal moment; he’s been foreshadowing since the beginning of the arc that some readers would be unhappy with the decisions that Laura was going to make.  It all feels like this metanarrative trick to reinforce a political point about the importance of women having the right to choose whether they remain pregnant or not at the expense of the reader, and I’m still trying to figure out what to do with it.  Is it cheap to make this point in relation to a key plot element in the story, especially when the reader unconsciously begins weighing Laura’s agency against the vast history of Ananke’s exploitation of people for her own gain.  There are elements of the Omelas child in the scenario, although in typical Kieron Gillen fashion everything is terrible for everyone and the atrocity only stops (but not really) one (immense) crime in a world that’s otherwise still as messed up as our own.  When it comes down to it, I’m glad that Laura doesn’t lose her agency and the whole thing was a trick, if only because it means that as a reader I don’t have to spend time puzzling over my own moral complicity in wanting Laura to have the child because it means Ananke’s game is done (I mean, I still do because how could anyone resist this sort of question, but it’s all hypothetical in the aftermath).  There are layers and layers to this whole mess.

The issue concludes by calling back to the end of the very first arc when Laura lit that one cigarette in the dark out of nowhere.  This time it’s not just a little flicker of flame; she creates an entire fireball floating in the air.  Keep in mind, this happens after she’s descended, so we’re not dealing with god powers here (at least, not any god powers that have been explained).  For all the messing with the readers’ heads that Gillen does with the pregnancy subplot, the steady reminders he’s been seeding in about how this one thing that Laura did way back when was weird and didn’t follow any of the rules set out by the universe up to this point is nice.  It feels rewarding if you’ve been keeping up with those low key details (and if you haven’t, noticing them after you reach this point in the series is really fun too).  The new status quo for Laura, as we go into the final arc, is one of relative stoicism.  She rejects all of her old labels while wondering what she actually is supposed to be, and along the way gets philosophical about the imminent mortality aspect of godhood (this wouldn’t be a Gillen story unless someone at some point got all meditative about the fact that we die; reflections on aging and mortality are totally his thing and probably a reason I find most of his work so resonant).  Here’s hoping we get some answers to these questions and others in the final arc. 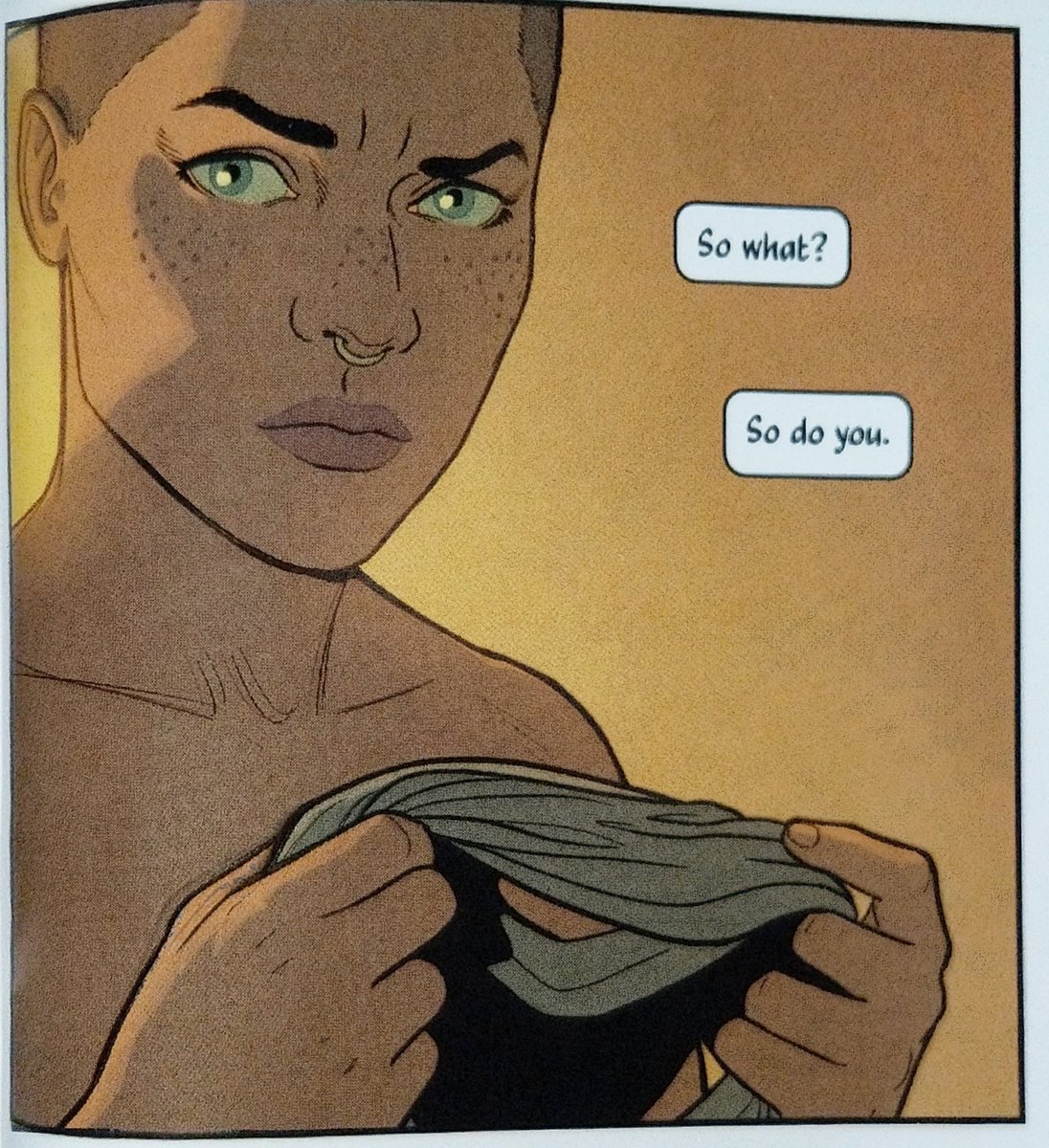 Thanks for reminding me about the evanescence of life, Laura. Geez. (Artwork by Jamie McKelvie, colors by Matt Wilson, letters by Clayton Cowles)