If you’re a fan of mainstream comics, there’s a strong probability that you’ve read Watchmen.  It’s the quintessential deconstruction of the superhero genre packed into a super structuralist comic form.  One thing about Watchmen that has stuck with me all these years is the understanding that while Moore foregrounds the masked adventurers in his story, he’s far more concerned with the way they impact the lives of the ordinary people who briefly encounter them.  The penultimate issue of Watchmen focuses on the final moments of a collection of disparate characters as they fall victim to the larger-than-life plans of Adrian Veidt.  Where Veidt, one of the superheroic elite, is reveling in his own self absorbed special specialness, ordinary people are facing the consequences of their brushes with masked adventurers.  Kieron Gillen, surprising absolutely no one, takes tons of inspiration from Alan Moore’s work in general and Watchmen in particular all the time, and the fortieth issue of The Wicked + The Divine feels in so many ways like Gillen’s answer to Moore’s New York street corner.

In a further nod to how he internalizes parts of Persephone’s identity, Tom is colored in neon pinks and cool green-blues that evoke Persephone’s power set. (Cover by Jamie McKelvie & Matt Wilson; Image credit: Comic Vine)

Beginning with the cover, this issue de-centers the intrigues of the Pantheon in favor of a class of people who have generally been relegated to background status for most of the series: the fans.  We’re continuing with the traditional front facing head portrait, but the subject here isn’t a god at all; it’s Tom, a fan whose story centers the issue.  Tom’s attire is extremely mundane in comparison to the high fashion that the gods typically wear; he sports a plain crew neck t-shirt with no extra accessories.  On his face he’s painted the markings that we’ve come to associate with Laura as Persephone: the red triangle covering and extending from the right eye with the three dots located both below the eye and above the eyebrow.  It’s a distinct reminder that in the last issue Laura gave up her divinity and all the trappings of that identity.  The thing that immediately springs to my mind when I see Tom in this particular makeup is the implication that Persephone has ceased to be an identity belonging just to Laura, and now it’s diffused itself among the fandom (this reading gets support in the issue when Tom engages in some self reflection about how he identifies with Persephone’s aspect as the Destroyer).  For all the ugly parts of the Pantheon’s revels, they still serve as a source of inspiration for their followers.

Our issue’s hero and his slightly obnoxious bestie. That Nathan holds the envelope directly in front of Tom’s face on camera says so much about his awareness of space. (Artwork by Jamie McKelvie, colors by Matt Wilson, letters by Clayton Cowles)

The central premise of the issue is that Baal, in a final attempt to kill the Great Darkness once and for all (an idea that Minerva privately finds laughable), plans to kill an entire stadium full of fans (all over 18, he insists because he’s done killing children, as if he isn’t just a child himself trying to muddle through this mess) at his last performance.  The story of this event is told through archival footage pulled from various sources, including Tom and his friend Nathan’s cell phone videos of their experiences leading up to the concert.  Mixed in with the video of our protagonist for the issue are things like security camera feeds showing Baal, Minerva, and Woden plotting out the show and news interviews with fans who have come to see the last Baal performance, all of which previously featured as incidental characters who narrowly survived encounters with the gods.  The issue’s shot through with this sense of foreboding as everyone recounts their brushes with divinity, many of which involved nearly dying (also in the mix is a middle-aged Asian woman who’s strongly implied to be David Blake’s ex-wife, because even characters who’ve only been mentioned can’t escape this particular vortex).  Everyone’s excited to be present to witness the beginning of the end of the 2013 Pantheon, and meanwhile back on the first page there’s a caption describing all of this as “the events of the O2 disaster.”

You can see how the whole setup is extremely reminiscent of the street corner scene in Watchmen.  We have our minor characters with their mundane lives having a moment in the spotlight of the story, experiencing some epiphanies about how they want to change going forward (Tom, for his part, goes through a lot of personal growth on his buddy’s camera that’s meant to mirror the emotional journey Laura’s gone through in the last arc) as the issue careens on towards the inevitable catastrophe.  In the run-up to the issue’s climax, Gillen and McKelvie do another layout trick with a couple pages that break the typical panel reading sequence in ways that clearly caused some frustrations for the guided view on Comixology.  Images of the fans both before and during the performance (when they’re all blissed out on Baal’s performance amplified by Woden’s mimicry of Dionysus’s hive mind powers) are interspersed with shots of the arena and Baal’s retreat from the show in a pattern that feels like a light remix on the 1-2-3-4 sequences of issue #8 and the Imperial Phase montage in issue #27 that gives the whole scene a chaotic, discordant feel.  Things are happening, and there’s sort of a sequence to them, but it’s meant to be much more of a sensory experience of the event that culminates with the explosion of the arena. 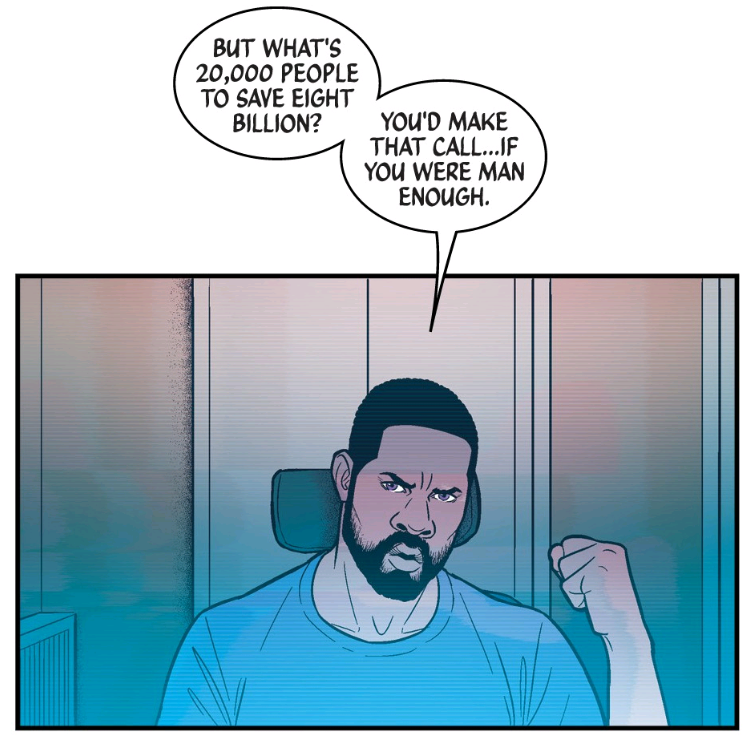 While Tom is the focal point of the issue, there’s also a significant amount of space given to Baal to explore how he has to psych himself up to do the thing.  We’ve known for a few issues now that Baal is a child murderer because he believes it’s the only thing that’s been keeping the Great Darkness at bay.  Yes, he’s morally compromised in a way that’s hard to redeem, but we understand that Baal’s dealing with some serious self loathing on top of the child sacrifice mixed up with total conviction that he has no other options for protecting the world.  His final performance is an attempt to trade one kind of atrocity for another in some weird utilitarian bid to feel like he’s done right (Baal explicitly justifies his decision in terms of pure numbers; twenty thousand lives are far fewer than eight billion).  Paired with appeals to his deceased father (the Great Darkness’s first victim) and the need to be “man enough,” it’s clear that the dispassionate part of Baal’s reasoning is mostly just a cover for his need to feel secure in his masculinity.  Baal is the most contradictory god on this point; he exudes confidence rooted in masculinity as part of his public image with nearly perfect fidelity.  It’s unsurprising that his deepest insecurities come from his failures as a protector of his family and the fact that his most intimate romantic relationship was with another man.  Baal’s unease with his sexuality is totally tied up in his overcompensatory gender performance (contrast all this with the plot between Tom, who is openly bisexual, and his friend Julie, whose romantic rejection of him he uses as an opportunity for growth and strengthening of their friendship with an explicit rejection of the toxic masculinity that Baal would be far more tempted to embrace).

Tom is also an amateur Pantheon analyst. He’s probably better at it than I am. Also, check out the Persephone color scheme on his blanket. (Artwork by Jamie McKelvie, colors by Matt Wilson, letters by Clayton Cowles)

One small side detail in the issue that’s sure to become important in the future is Minerva addressing someone off panel about her plans to create a new plague (likely as a response to the ever-growing complexity of the world, much like when she created the Black Plague).  The person being addressed is a bit of a mystery; on my first reading I thought it might be Jon Blake, but that doesn’t make sense because he’s securely in Woden’s possession at this point, and neither Woden nor Baal are aware of Minerva’s true identity (so revealing anything about herself to Jon would be counterproductive).  My speculation at this point is that she’s actually addressing the 1831 Woden’s creature whom Ananke apparently captured in 1923 when that Pantheon’s Woden mistook it for the zeitgeist.  That’s a dangling thread from the historic specials that I expect to come back some time very soon, and I will be extremely disappointed if it doesn’t because I’ve been waiting for resolution on the Frankenstein issue for over a year now (also, I just remembered that Percy Shelley wrote “Ozymandias” and the wheels are spinning on further connections that Gillen’s built into this series; I am a nerd).

In the mean time, Gillen has given us a rare happy ending with this issue.  The O2 arena does get blown up, and the thing that Baal calls the Great Darkness appears to be destroyed along with it, but the crowd emerges before the explosion after Laura appears and leads them to safety with her not-quite-god powers.  Unlike Moore, who chooses to kill off his mundane characters to underscore the collateral damage that his megalomaniacal masked adventurers inflict as a side effect of their fully enacted power fantasies, Gillen actually lets his background characters live long enough to enjoy the ways they’ve been changed by the gods.  There are still five issues left after this one, but for the moment we can rest on an okay ending. 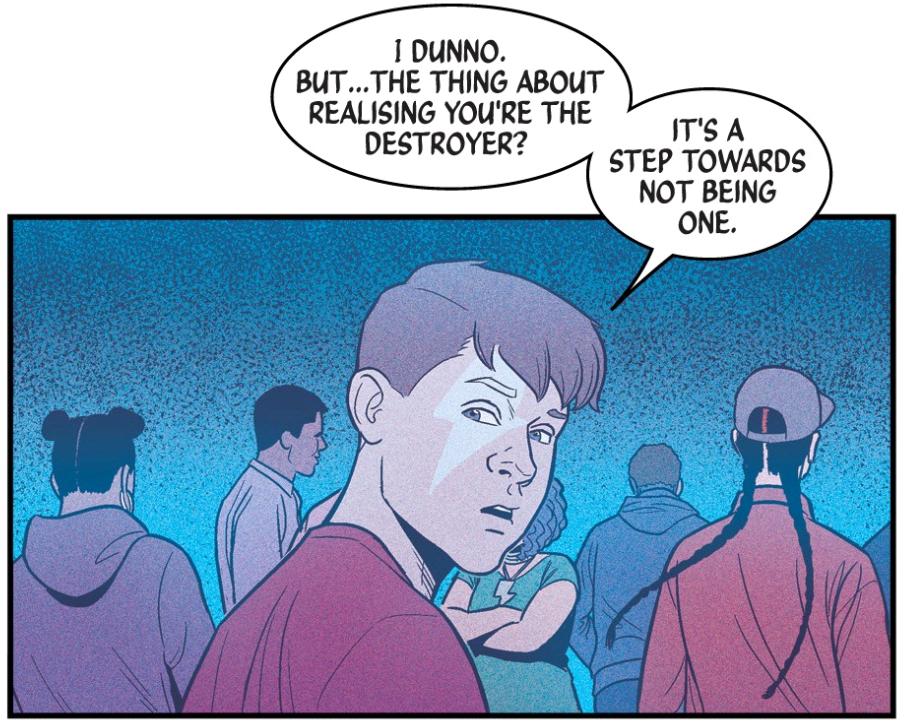 This is the bit where Malcolm Long runs off to help stop a fight. Like, straight up, this is that moment recapitulated but with a lot less explicit violence and marital strife. (Artwork by Jamie McKelvie, colors by Matt Wilson, letters by Clayton Cowles)