Sometimes it’s good to take a break from stories tinged with relentless bleakness around the edges, so I figured I’d look at a one-shot that came out last year centered around my favorite character within the larger X-Men universe: Illyana Rasputin.  Some folks might remember the series I did last year on the original Magik miniseries from 1984 by Chris Claremont and a number of artists (links to those posts can be found here, here, here, and here); after I heard about this issue I decided to check it out since it sounded like it directly explores a lot of the issues that Illyana’s origin story raises, but in a context divorced from the extensive continuity that’s built up around the character in the last thirty years.

She does get a sweet cape though, so the cover’s only partly lying to you. (Cover by Jeff Dekal; Image credit: Comic Vine)

The issue itself is part of one of Marvel’s longstanding traditions of publishing stories outside of regular continuity under the banner of the What If? series.  These stories typically take major events in the Marvel universe and imagine alternate outcomes that either end in abject tragedy or arrive at the same ultimate result via a different path.  What If? Magik actually discards both of those templates and explores a path where Illyana avoids all the angst associated with the X-Men and reaches a state of relative peace that’s not present in most of her depictions within regular continuity.  The full title of the issue is What If? Magik Became the Sorcerer Supreme, but that title’s mostly in place as a way of enticing readers; Illyana does end up accepting an apprenticeship under Dr. Strange in the course of the story, but things leave off before she actually ascends to the eponymous position.  For the cover itself, there’s not much to say other than we get a nice picture of Illyana in a meditative moment.  The background colors, with her sitting mostly in shadow but facing out towards the light, is a nice nod towards the typical dichotomy between good and evil that Illyana always feels as central to her sense of being.

The story itself is divided into three broad acts (it’s been so long since I read a genuine one shot I had almost forgotten that it was possible to do this in nineteen pages): Illyana’s attempt to go it alone after leaving Westchester, her apprenticeship under Dr. Strange, and the final confrontation with Belasco.  Leah Williams, the writer on this issue, hits all the beats that you’d want in such a brief story about growing past trauma with Illyana’s beginning as someone who’s deeply internalized the harm Belasco did to her, slowly coming to grips with it under Strange’s guidance, and finally establishing a sense of identity that’s shaped but not dominated by her experiences.

The core of the issue is the relationship between Illyana and Dr. Strange.  Where the primary mentor figure in Illyana’s life in the main continuity is Magneto, whose own struggles with a complex morality that emerged from traumatic experiences help him serve as a somewhat reluctant guide during her time in the New Mutants, Stephen Strange is a generally pleasant person who relates to Illyana purely as a more experienced mage to a potential protege.  This isn’t a couple of survivors relating to one another over common experiences, which is a valuable sort of relationship (and one that Illyana’s definitely needed during much of her history).  Strange reads more like a somewhat bumbling but enthusiastic foster parent; he isn’t projecting his own baggage on his relationship with this kid he picks up off the streets.  There’s a playfulness that Strange injects into Illyana’s life that feels like it was mostly missing in the main continuity, especially from her parental figures. 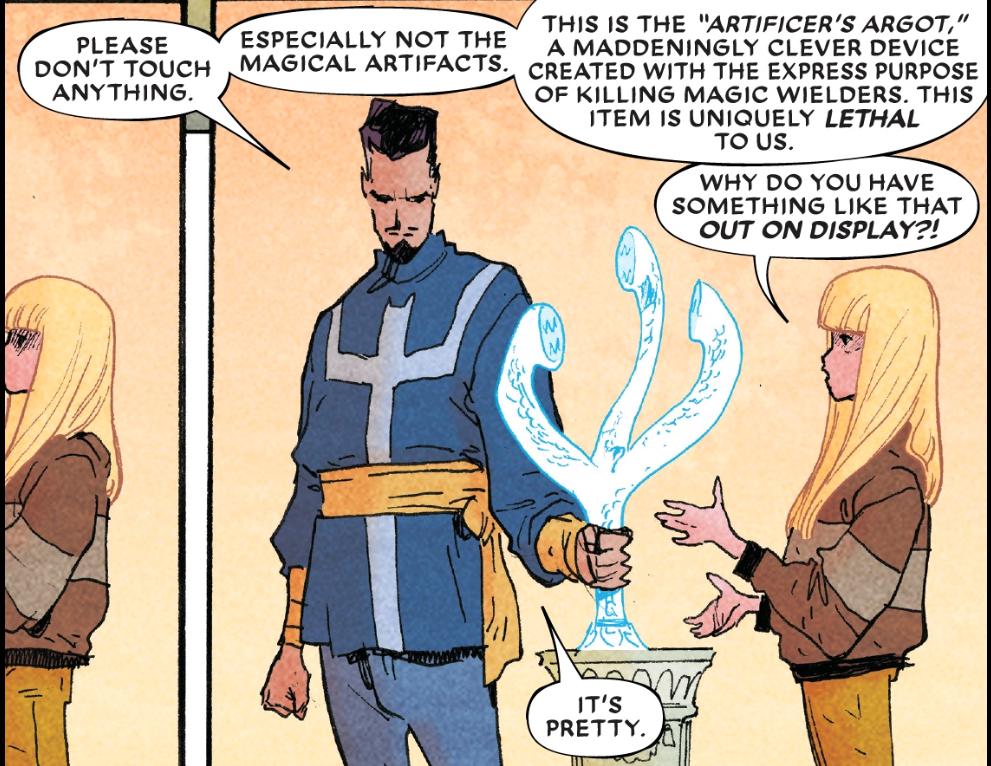 Of course, being someone who doesn’t relate to Illyana through trauma backfires on Strange at certain points.  After she explains her history as Belasco’s sorcery apprentice, Strange rather callously offers her an apprenticeship as well, completely oblivious to how she might react to an offer that sounds exactly like what Belasco has already done to her.  Context matters, and Strange fails to account for that pretty spectacularly.  Because this is an essentially hopeful story though, he learns from his mistake, and he and Illyana develop a pretty strong bond.

For all the parts of Illyana and Dr. Strange’s relationship that are fun and joyful, this is still a story about working through and overcoming trauma, and because it’s also a superhero story, that means that Illyana’s moment of epiphany about her identity has to be accompanied by a confrontation with her abuser.  Belasco attacks Illyana and Strange immediately after Illyana has finally had a breakthrough in her practice of creation magic to create a Soul Staff (contrasted with the Soulsword that Illyana’s known for in regular continuity).  Williams leans heavily into the abusive dynamic between Belasco and Illyana, having his appearance act as an immediate trigger for her old feelings of helplessness.  A wordless sequence shows Illyana, faced with Belasco’s threat to Strange (which Strange isn’t really concerned about), cling to her Soul Staff as she becomes the little child who was originally abducted to Limbo.  Her posture in the scene suggests that she’s less terrified of Belasco than working to maintain the equilibrium she’s found under Strange’s tutelage; the Soul Staff is a major accomplishment for her, and it serves as her anchor while she gets hold of herself.  That Illyana doesn’t immediately lash out at Belasco in some splashy show of strength feels like a good reflection of how exposure to traumatic triggers often requires significant mental resources to cope in the real world.  While Strange might be slightly inconvenienced by Illyana being too busy to help him fight the demon lord off, her reaction comes from a healthy place.

Williams leans far harder into domestic abuse tropes with Belasco than anything Claremont did in the original miniseries. (Artwork by Filipe Andrade, colors by Chris O’Halloran, letters by Clayton Cowles)

Naturally, this is still Illyana’s story, so she does the last minute save to keep Strange from being killed by Belasco’s dark magic.  The conflict resolves with Illyana stabbing her Soul Staff through Belasco’s heart, echoing the killing blow that she resisted delivering back in Magik #4.  It’s a satisfying turn from the original resolution where Illyana pulled back because of her fear that she’d become like Belasco; we get a recapitulation of that here as she manifests her devil’s horns and collapses in terror at what she’s done.  It takes Strange talking her down to help her see that she’s not done anything so unforgivable as her abuser.

The issue’s end leaves Illyana in a place where she’s never really been allowed to rest in main continuity.  Though there’s a strong implication that she still has a lot to learn as a magician, Illyana is set on a path here that’s altogether much more hopeful than in any of her other appearances.  She’s set up as part of a family that has significantly less baggage than anyone associated with the X-Men.  It’s an excellent ending for a character who usually doesn’t get this kind of love in stories about her.