The first time I read this issue, I reached the final page and immediately thought that this whole thing had to be a trap.  My storytelling instincts have always pointed towards the possibility that The Wicked + The Divine will end as a story about pyrrhic victories.  Laura will find a way to manage her depression and her self-destructive tendencies just long enough to end Ananke’s Recurrence, but it will probably kill her and all her friends in the process.

Issue #41 hinges on suggesting a different trajectory: Laura has a plan that can restore most of the not-actually-dead gods, and she’s going to marshal the forces of the dysfunctional Pantheon to do Ananke in.  The day will be saved and most folks will get to have some form of a happily ever after. 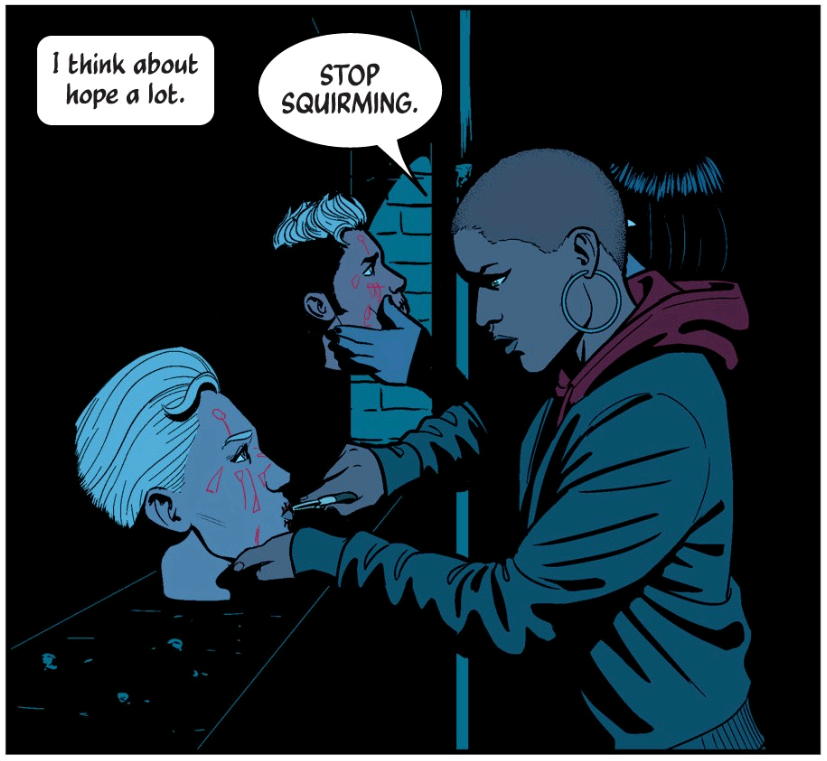 It’s all about hope. Also, tangetially, would you be more or less chill about someone sticking a knife in your mouth after you’d have your lips sewn shut? (Artwork by Jamie McKelvie, colors by Matt Wilson, letters by Clayton Cowles)

This is where alarm bells start going off, because hope is the last thing you want to pop up in a Kieron Gillen story.  Hope is the thing that makes you think against all available evidence that things might, just might, turn out okay.  It’s the whet stone that sharpens the dagger just a bit more before it gets plunged into your heart.  Everything about this issue is hopeful, and I am more afraid than ever that this story will conclude with Ananke victorious and everyone dying pointlessly just short of the goal.  In a story preoccupied with mortality and youth’s obscene sense of invincibility, it could happen without feeling like something we couldn’t have foreseen.  Lucifer and Inanna and Mimir have bodies again, and I am afraid for all of the Pantheon again.

Everything about this cover says “Woden” to me except for the circuitry motif in the background. (Cover by Jamie McKelvie & Matt Wilson; Image credit: Comic Vine)

The cover of this issue echoes the cover of issue #7; in place of Woden’s featureless mask upon which we can project all of our loathing, we have Mimir, the true member of the Pantheon, staring back behind the helmet his own father forces him to wear.  Jon Blake’s aesthetic as Mimir, prior to his father’s betrayal, is the general inspiration for Woden’s look, but with a nod more towards the synthesis of natural and artificial.  Jon’s face bears marks that resemble circuitry embedded in his skin (very much like the background of this cover).  The helmet that Woden forces him to wear (along with the artificial body his head is mounted on) bears a strong resemblance to Valkyrie armor rather than the sleek bodysuit that he was sporting immediately after his ascension.  We’ve gotten to see so little of Jon and his personality, and that’s largely because David has been superimposing his own image on top of his son’s potential.  It’s a relief when Cassandra finally gets Jon out of the helmet that’s been his prison for the entirety of the series.  I hope this cover’s the last we see of this particular accessory. 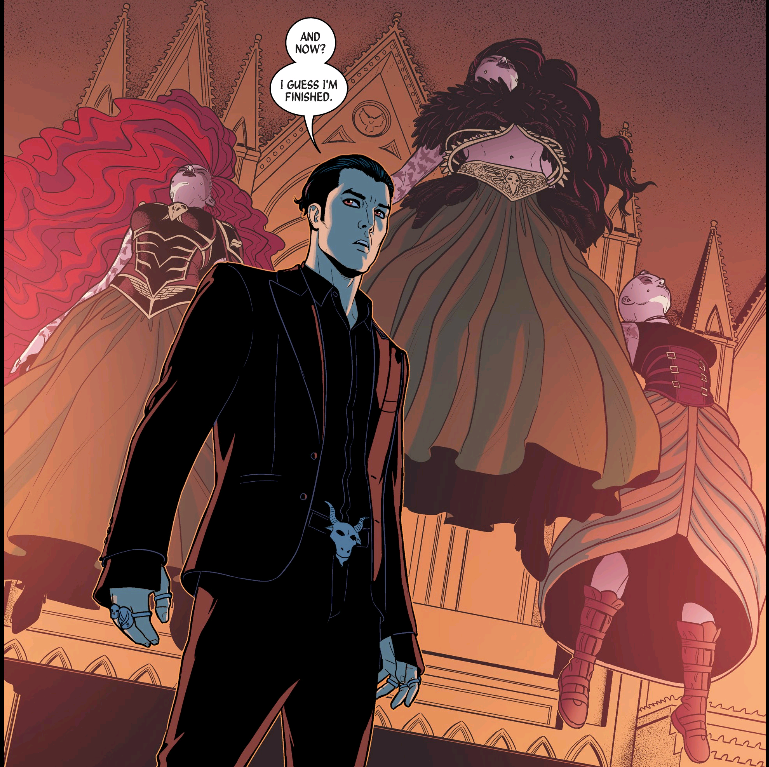 This is a good look for Nergal. Shame he arrived at it so late. (Artwork by Jamie McKelvie, colors by Matt Wilson, letters by Clayton Cowles)

The synopsis for the issue goes like this: Laura rescues the Norns and the heads from Woden’s prison in the mansion where the official apparatus of the Pantheon now operates since Baal burned down Valhalla, and then she takes them all to the Underground where Nergal (he’s done calling himself Baphomet ever since he was revived by the Morrigan) has finished his altar to his dead girlfriend and uses the Morrigan’s bodies to reincorporate Lucifer, Inanna, and Mimir (Tara chooses to remain just a head) while Laura explains (part of) her plan to take Ananke down.  In the midst of all that plotty goodness is the real meat of the issue: the feels that come from a cascade of moments of self actualization and reunion.  To whit, Laura saves Cassandra and they make up from their last fight; Laura finds Lucifer, who’s not bothered by the long time it’s taken Laura to get herself together; Cassandra frees Jon from Woden’s shackles and blows up the mansion (while beating up some Valkyries in a most satisfying manner); the heads explain that Minerva and Ananke are the same person; Laura finds out that Sakhmet is definitely dead (okay, that one isn’t positive, but it’s a feels punch); Laura helps Nergal let go of his history with the Morrigan so he can actually help everyone else; and the newly reconstituted Team Underworld agree to trust Laura and her (still mostly unexplained) plan.  It’s a lot of stuff to unpack, particularly between Laura and Nergal, who strike me as the emotional stars of the issue.

While we got to see a glimpse of the Laura who’s gotten it together at the conclusion of the last issue with her rescue of the crowd at the O2 disaster, this is the first time since she sorted things out at the end of issue #39 where we get to be in her head and have her talk with us about what she’s thinking.  She seems a lot steadier here than she did just a couple issues ago when much of her internal monologue was focused just on coaching herself to take positive actions instead of sulking in her own head.  Given the extreme stress of the situation (there’s a lot of bad news delivered and received in addition to all the happy things going on), Laura’s doing pretty well.  It’s good to see her back on her feet and making those repeated decisions to keep moving forward. 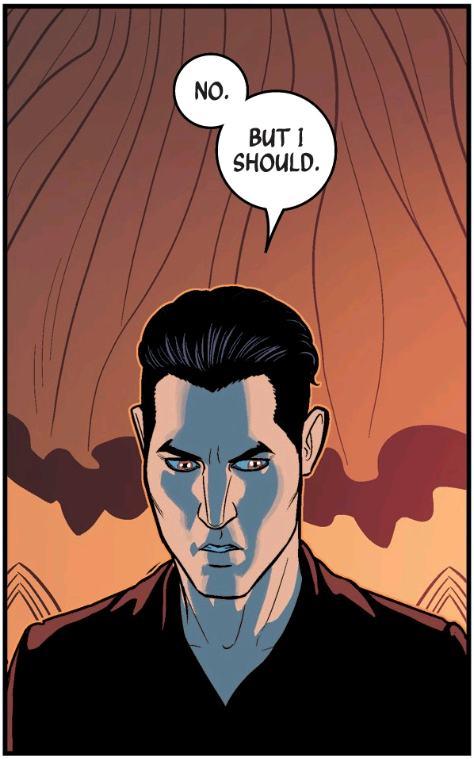 He’s talking about holding on to the Morrigan despite their abusive codependent relationship that resulted in his impending early demise. Dude still has some baggage that he’s working through. (Artwork by Jamie McKelvie, colors by Matt Wilson, letters by Clayton Cowles)

Nergal is a whole different sort of mess.  It’s clear from his conversation with Laura that they’ve already discussed using the Morrigan’s bodies to help out the heads once they’ve been rescued, but that previous discussion ended unresolved.  Nergal needs a bit of a push to let go.  He feels like he’s a couple steps behind Laura in his recovery; he realized that he and the Morrigan were extremely bad for each other, and now that she’s gone he’s trying to muster the strength to move past her.  Being an underworld god with the ability to revive other folks has its temptations, and his observation that he and the Morrigan could just wrap themselves up in an endless cycle of death and resurrection as they share one life while being forever apart has a certain goth appeal to it.  The fact that that sort of bleak romance where everyone’s unhappy but deeply satisfied with the image of themselves as tortured lovers is just a variation on what he’s been through ever since the Morrigan brought Nergal into the Pantheon doesn’t seem to escape him or Laura.  Even in the face of a remarkably shortened life, Nergal doesn’t have to spend the remainder of his trapped in his past.

Following all these positive developments, the issue finishes on a triumphant note as Cassandra, in like her third moment of pristine badassery in this issue, declares that she knows how to find the Great Darkness, which they’ll need to resolve if they have any hope of getting Baal to come around on the Ananke issue.  It’s glorious, and I am still oh so scared of how things are going to shake out. 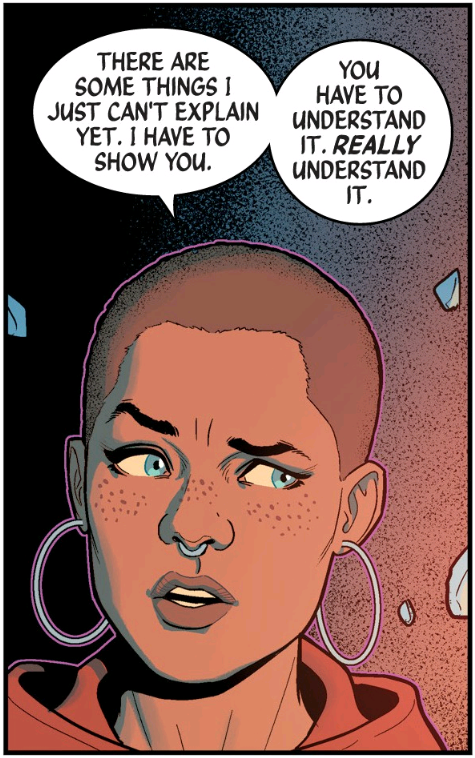 There will be answers next issue, but Laura is really keen on this whole “Trust me” thing, so we’ll go with it. (Artwork by Jamie McKelvie, colors by Matt Wilson, letters by Clayton Cowles)