I like to think about The Wicked + The Divine‘s individual issues largely in terms of how they reflect various characters’ arcs.  This issue features major developments across three characters who’ve been various levels of antagonistic to Laura across the span of the series.  One of them is about hitting an inflection point in the transition from heel to face while the other two are studies in how character arcs can end either in epiphany or ignominy.

This is probably the creepiest cover that McKelvie and Wilson have done yet. (Cover by Jamie McKelvie & Matt Wilson; Image credit: Comic Vine)

The cover for this issue is a portrait of one of Woden’s Valkyries.  It’s never been extremely clear how consistently individual Valkyries wear specific colors, but the pink trim suggests to me that this is supposed to be Eir, the woman who had the misfortune of being Sakhmet’s handler way back in issue #17.  Her face is splattered with someone’s blood.  We’ve seen this motif before on the cover of issue #35 where 1923’s Minerva looked gleefully murderous.  Knowing what we know about Minerva and Ananke at this point, that attitude is disturbing but understandable.  The Valkyrie, by contrast, looks totally impassive.  There’s no fear, no anger, no joy, nothing in her expression.  It’s way more chilling than any of the other relatively gruesome covers that have come out across the series. 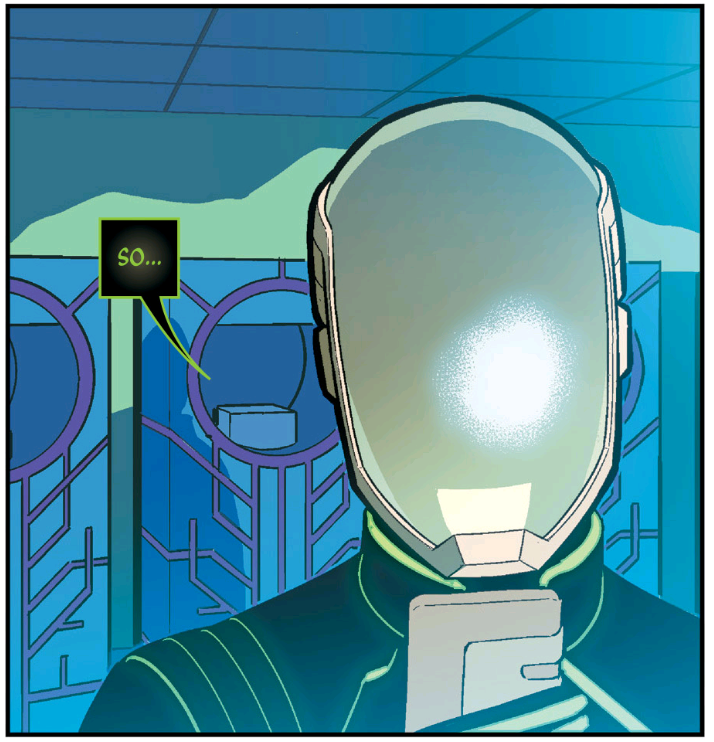 This is the moment where Woden, having been given due warning about the danger he’s in, decides that he is still totally capable of pulling this Pantheon ruse off. “Men like you” indeed. (Artwork by Jamie McKelvie, colors by Matt Wilson, letters by Clayton Cowles)

Because we’re speeding towards the series conclusion, and this is a story that’s always been explicit about the need for a high body count, we get two major character deaths in this issue.  They’re the central study in contrasting character arcs, so let’s take them in turn.  I’ll begin with Woden since his arc feels significantly less complex than what we get at the issue’s end.  Woden has been the unrepentant jerk of the Pantheon since the series’s beginning; he manipulates women for his own gratification, he sells his allies out for minor advantage, and he betrayed his son for the sake of a few months of luxury and power.  At every turn he has resisted revealing some nobler agenda; the only redeeming qualities that he seems to have are a shallow affection for Cassandra and the fact that despite all the terrible stuff he’s done to Jon, his son still wants him to be okay.  Despite all of these negative qualities, Gillen manages to give Woden a death that’s both tragic and fitting at the same time.  Given every opportunity to make a better choice, Woden to the very end makes the calculation that he thinks will give him more power heedless of others’ warnings.  His death here is grotesque and self inflicted and entirely unnecessary if he had just had the good sense to take a genuine gift instead of trying to leverage more advantage.  There’s no redemptive moment for the creepy middle-aged dude who hangs around with a bunch of teens, which is probably precisely what Gillen wants given his transition away from writing stories about young people with WicDiv‘s impending end.  About the only sympathetic thing I can say about Woden is that his death is extremely gruesome and horrifying.  Everyone else in the Pantheon that’s died has at least gotten relatively swift ends; Woden gets torn apart by the very women he victimized the most.  It’s all ugly and brutal and reveals pretty much nothing new about a character who told us from his first appearance exactly what he was. 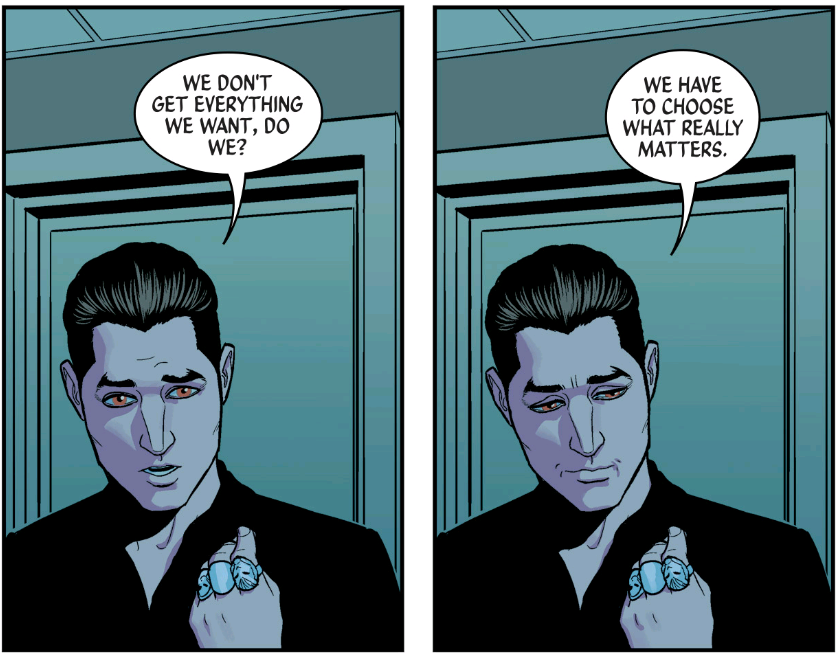 Contrast all of that with the issue’s major sympathetic death; Nergal, upon learning that he’ll be losing his god powers as part of Laura’s plan to take down Ananke and that he’s the only Underworld god left who can do resurrections, runs away from the rest of the group to visit Dionysus in the hospital.  Dio’s been brain dead since his big hero moment in issue #32, which is only mostly dead in this case.  Having established with the Morrigan that the Underworld gods can resurrect other gods, but only at the cost of their own lives, it becomes immediately apparent what Nergal intends to do.  He’s spent the entire series being terrified of the death sentence that the Morrigan put on him when she asked Ananke to bring him into the Pantheon; avoiding it death has been the chief motivator behind almost every bad decision Nergal’s made since his ascendance.  Choosing to use his power to save his best friend at the cost of his own life marks a complete reversal from what Nergal attempted to do with Inanna.  It’s also the completion of a redemptive character arc that mirrors Woden’s totally unrepentant one.  Both characters’ initial appearances are built on tropes surrounding abusive and controlling men.  Our introduction to Nergal as Baphomet involved him gleefully brandishing the apparent severed head of his female lover, and from there his early appearances revolved around inviting Laura deeper and deeper into a series of at best unsafe and at worst self-destructive choices.  Despite these early parallels to Woden, Nergal also reveals at every turn in his own story that while he makes many very bad, selfish choices, he has a genuine, if weak, desire to do right by the people he cares about.  Coming into his own as someone who can be self sufficient (even though that metamorphosis is incomplete when we catch up with him in issue #41) is a major accomplishment given those beginnings, and his totally independent decision to offer Dionysus his chance at returning to a normal life marks the completion of that development.  I’m really sad that Nergal dies, and I’m really happy that he does it in a way that gives final closure to a throughline of his character that’s been present from the beginning.

The third character arc of the issue belongs to Baal, and unlike the previous two, he makes it to the last page intact, which means that his story isn’t finished yet.  There are still some questions left to answer regarding Baal’s development: once the crisis is over, assuming he survives, how is he going to square his child murdering with the fact that he was completely manipulated by Ananke?  Baal is a character fueled almost exclusively by his passion, and while in the moment of realization that he’s been doing evil things needlessly he seems pretty set on punishing himself, it’s hard to judge how other factors like Inanna’s survival and just having some time to process how Ananke is at fault for all of his actions since the beginning of the Recurrence.  While I was initially skeptical that Inanna wasn’t just the purely good person that he appears to be, I’ve come around to thinking that if anyone in this mess deserves to have a happy ending, it’s him and Baal.  I don’t know how likely it is that Gillen will give them that ending (above all else, fear hope), or even what would need to happen for Baal to both be able to forgive himself enough to be happy with Inanna and receive an appropriate consequence for murdering children.  There may not be a way to thread that needle. 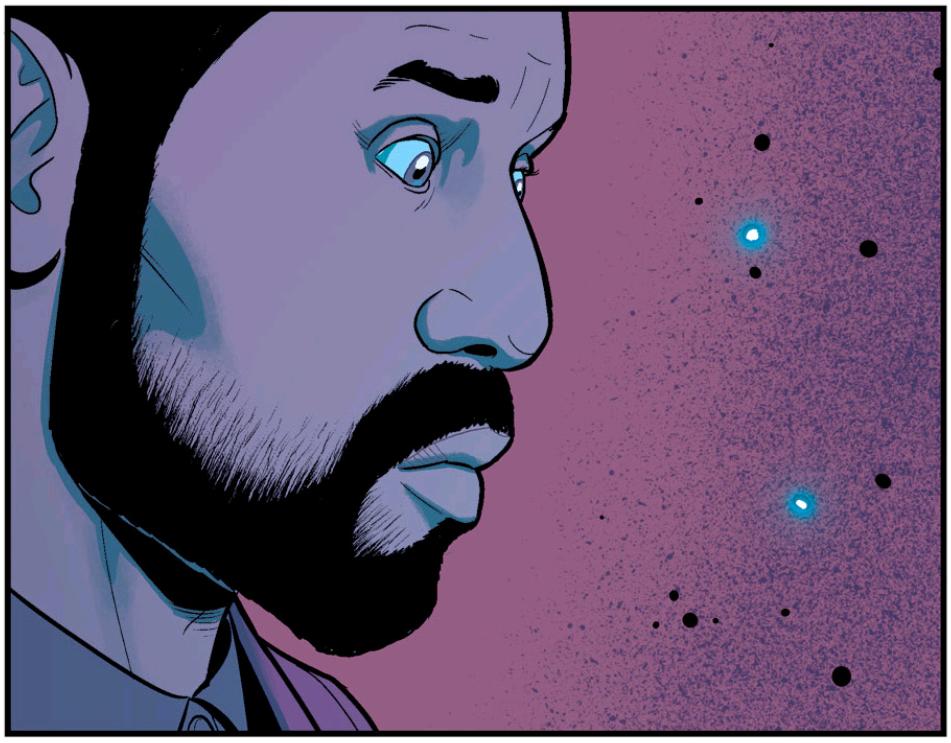 There’s a lot going on inside Baal’s head at this moment. (Artwork by Jamie McKelvie, colors by Matt Wilson)