It has been a week, and I have done many things.  The most important one is obviously the decision for Sara to date the science officer Suvi.  Their exchange when Sara explains that she likes Suvi is adorable, mostly because she very awkwardly admits that Suvi’s Scottish accent is a major turn on.  It’s not exactly the thing I’d lead with, but I can’t deny that it was a very entertaining beginning.  I’m looking forward to seeing more between Sara and Suvi as they discuss stuff like the interplay between faith and science (it’s easy to forget that expressions of faith are considerably less common in the Mass Effect universe; I guess the writers tend to think that meeting aliens would shatter a bunch of belief systems; I think you’d only have to worry about the fundamentalist ones having a bad shock), although I worry ever so slightly that the romance might end up being a bit underdeveloped in comparison to the ones written for squadmates.  This is obviously all baseless speculation seeing as I’m playing through for the first time, but I also remember Joker in the original trilogy, and while I loved his friendship with Shepard, I always felt like he got shortchanged on fun interactions in comparison to the rest of the crew.  Time will tell.

Naturally, committing to a relationship so early in the game means that I have foregone continued flirtation with other folks, particularly PeeBee, who is the first Asari squadmate in the series that I’ve actually found relatively compelling.  I guess I just find commitment issues appealing.  The upside is that PeeBee’s fun to bring along in the field because she uses primarily debuffs, and she has a good sense of humor.  I’ve been exploring the planet Voeld (or Hoth, as Rachael described it as “cold and full of tauntauns”), and one of the best parts of driving around the barren icy landscape is listening to PeeBee’s constant complaints about how I handle the Nomad paired with her perpetual bafflement that Jaal, the new alien squadmate, is totally fine with everything and repeatedly falls asleep while we’re traversing hazardous terrain in the car.  I don’t have much of an opinion about Jaal at the moment, although I have to respect his devotion to personal grooming (he speaks regularly about things like how there’s not much difference between mixing chemical explosives and making various scented oils and lotions to use as part of his daily toilet).  Perhaps the weirdest thing is that everyone insists that he and the rest of the Angarans are an extremely expressive race, but I really don’t see it.  Jaal’s defining characteristic in my interactions with him has been “understated.”

Anyway, let’s talk about Voeld.  Eos was a great desert planet with lots of vibrant life and interesting, stark geological features.  Voeld is… blue.  It’s an ice planet, so I expect things to be a little more sparse than a place with a climate more typically suited to human life, but it’s like, very blue.  I’ve spent probably six or so hours exploring and doing side missions (even got my viability rating up to one hundred percent!), and I’m really starting to miss other locations just because I want some more visual variety.  The last thing I did before I sat down to write out this log was get the Nexus outpost established, and I’m sorely tempted to quit the planet and go flying off to do more adventuring (there’s another planet I need to check out that I haven’t even visited yet).  It’s just hard to make ice deserts interesting, or maybe the mild monotony of the area is part of what folks disliked about the game; I’m not sure yet.  I’ll see if the pattern continues as I move along with the story.

Speaking of the story, I can see how there’s just not the same urgency in the narrative hook for this game as there was in the original trilogy; “a group of colonists try to get a foothold in a brand new galaxy” just doesn’t have the same oomph as something like the Reapers.  Despite that, I find myself fully on board with the plan of trying to help folks establish new homes.  The Nexus is a mess and a half, and I don’t really have much time for the administrative backbiting, but when the game keeps reminding me while I’m there that there are likely hundreds of thousands of people waiting to be pulled out of cryo because the Initiative doesn’t have enough resources to support them, I feel a fair bit of motivation to go fix some planets with poorly understood alien terraforming technology (I’m fully prepared to accept that the Remnant technology is a vague rip off of the Reaper plot line).  There’s still an uncomfortable amount of shooting, but Sara’s core mission of helping establish homes is low key heroic in a way that Shepard’s story never really could be.

On the front of uncomfortable binary decisions, this week we have the case of the Angara researcher who has hired Milky Way mercenaries to catch some space whales that hold deep cultural significance for the Angara.  The yevara (space whales) are an animal species that has survived since before the Scourge, that big galaxy-wide calamity that just happened to take place right after the Andromeda Initiative took off on its journey.  They’re also relatively intelligent, and Angara tradition holds that their songs carry memories of life from before.  Anyway, this researcher has discovered that the yevara produce an enzyme that’s effective in counteracting the effects of Kett (those are the bony enemy aliens who will probably turn out to be genetically modified Angara *cough*Collectors*cough*) weaponry.  Upon discovering this researcher and being told the situation, I was given the choice of shutting down the research or allowing her to continue because there’s a war on, don’t you know.  This is one of those situations where I really would rather not be the one making the choice; we’re talking about balancing an old and revered cultural notion against a pragmatic need to reduce the effectiveness of enemy combatants.  There’s a healthy debate to be had there, but it should be had by Angara instead of some human who’s just trying to make nice with the new neighbors.  I ended up letting the researcher keep working, and the game thankfully eased my conscience by having Sara add that she needs to let the Angaran Resistance know what she’s up to. 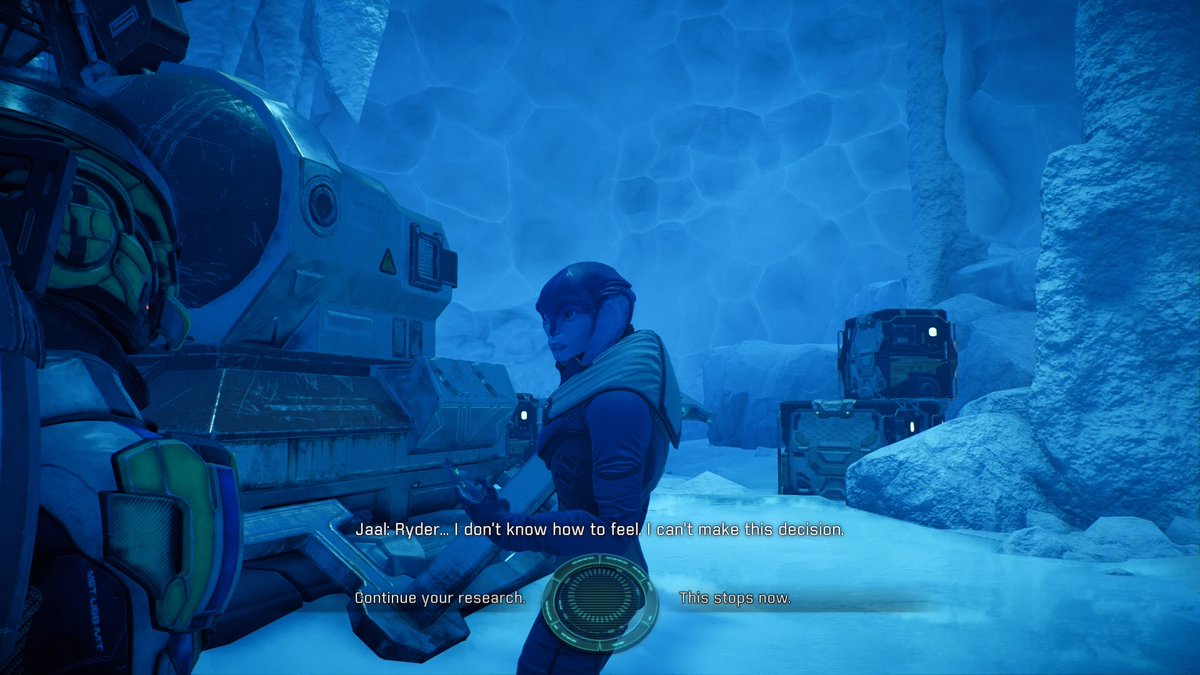 Despite being the only person in my party with any sort of idea of the complexities of this decision, Jaal is utterly useless as an advisor. Also, this is what everything on Voeld looks like. It’s all blue, all the time.