I recently got Rachael to read The Wicked + The Divine, and one of the first things she observed after she got a few trades in (y’know, past the point where we start getting the cascade of revelations that make re-reading fun) is that the series works in a way that’s very similar to the television show Lost.  There are a lot of mysteries up front that get spooled out as hooks to keep readers speculating and wondering about how things will work out, but those are all predicated on withholding information until a predetermined moment in the narrative.  The OMG moments that typically cap each story arc are far less impactful once readers understand the rules that are in place.  It’s a story driven by revelations to the reader far more than decisions made by the characters.  I’m generally okay with this structure though, because WicDiv has always been about mystery and not necessarily knowing what the storyteller is doing but agreeing to go along for the ride anyway.  This is also the core of mystic religions, so I guess it works thematically; everything is story and story is everything.

Cassandra is easily my favorite character, and I don’t have much to say about this cover at this point. I’m just glad she finishes the issue not dead. (Cover by Jamie McKelve & Matt Wilson; Image credit: Comic Vine)

The cover of this issue features a portrait of Cassandra, and I don’t think I can emphasize how worried I was that she might not survive this issue.  I still fully expect that she might not survive the series, but the general sense of impending doom I’ve learned to associate with a character getting featured on a cover of The Wicked + The Divine had left me jumping into this issue with some trepidation.  I’m thankful that was not the case.  By this point I think we’re all pretty intimately familiar with McKelvie’s headshot covers.  Cassandra looks unusually stoic given the circumstances, and she adds one more entry to the set of the original twelve gods’ covers (Minerva will be getting her own next month, and then the only one missing a cover in this style will be Sakhmet, which is unlikely to be corrected).

With only two issues following this one (and one of those being the epilogue to the primary story), it’s time to set aside mysteries and begin offering resolutions.  The comparison to Lost ends at this point, as it feels like the ending is going in a direction that was planned all along.  We learn a lot about Ananke’s history as part of the original Pantheon, and the explanations she provides feel sensible.  It’s definitely not “a wizard did it” or “they really were in Purgatory the whole time” but something that might have been reasonably extrapolated earlier with enough insight and consideration of the sort of story that Gillen and McKelvie have been telling from the beginning.  Gods are founded on stories, and stories are imperfect reflections of lived experience, and the act of becoming a god is largely about being consumed by a story, whether people tell it about you or you tell it to yourself; either way all that’s needed is enough fervor to make the fiction believable.  Ananke conned her way to immortality on the backs of hundreds of people with a spark of magic in them, and the deeper tragedy beyond their victimization is that they were so eager to be conned in the first place.  We love to tell stories, and we especially love to tell stories that star ourselves.

Ananke’s sister explains what godhood is and what it does. (Artwork by Jamie McKelvie, colors by Matt Wilson, letters by Clayton Cowles)

The stories that the 2014 Pantheon have told themselves rest on the distillation of their most salient traits.  We saw it most starkly with Laura, as she was portrayed with considerable complexity in the run up to her ascension, but then during her time as Persephone the overriding mode of her interactions with everyone was self destructive.  Laura makes one bad decision after another, and they all stem from her total capitulation to her role as the Destroyer despite early evidence that there was so much more to her than a depressed teen who wanted a brief, bright life.  Persephone is a variation on Ananke’s sister’s god, She-in-Thirds (I’m dropping the Epithymia speculation at this point; desire no longer seems like the right word to characterize the sister’s role in the story).  It’s not totally clear to me how she fits into thirds; the underworld and agrarian fertility aspects are clear enough, but I don’t know much about any third role that Persephone would have historically played.  At any rate, Persephone’s an echo of that older goddess, but the aspect that Laura fixates on when she’s caught up in godhood is the underworld.  Laura’s been through some major traumas both before and immediately after her ascension, and that crystalizes her god concept around Persephone’s suffering.  As savvy readers we can see that there has to be a return from all that, but it’s interesting that Laura only escapes when she casts off the narrative pattern completely. 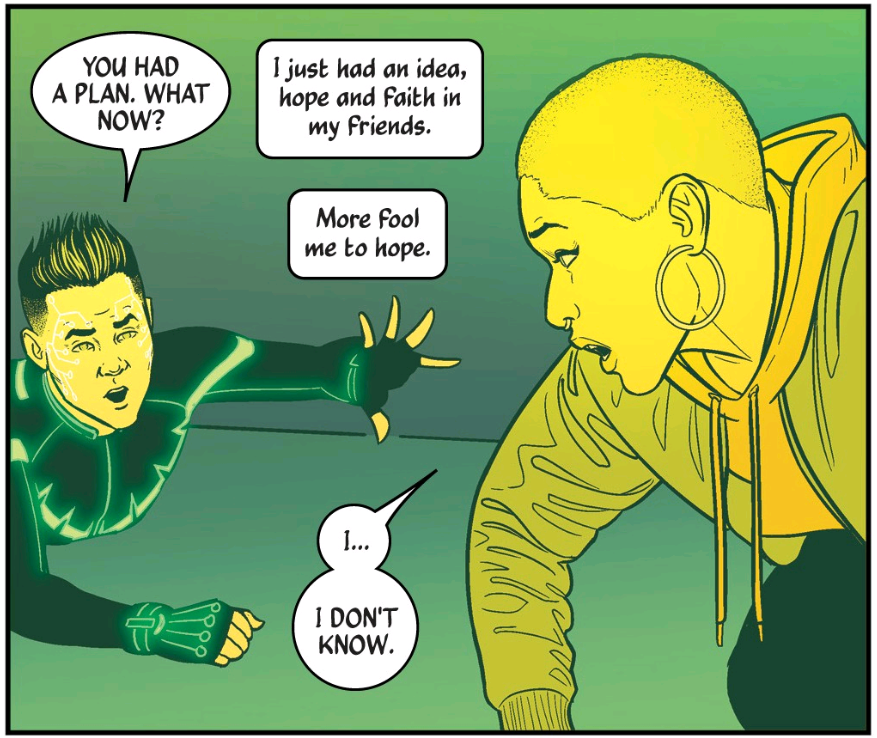 Faith in friends was actually a very good decision here, Laura. Also, you lucked out that Nergal decided to trade himself for Dionysus at the last minute. (Artwork by Jamie McKelvie, colors by Matt Wilson, letters by Clayton Cowles)

Sort of ironically, this gets best exemplified in the action segment of the issue (I’ve grown to really appreciate brief action sequences in comics because there’s often very little interesting to say about them) which culminates with Ananke using Woden’s hijacked Dionysus machine to disrupt everyone and Laura being forced to admit (at least to the reader) that she doesn’t have a plan at all beyond trusting her friends to get through this mess somehow.  She’s not running a script so much as she’s just trying to muddle through something messy and chaotic; she lets things be less sharp, and it pays off.

Given Laura’s rejection of godhood in favor of a story that’s not quite so formulaic, it’s actually a bit of a relief to see her at the moment of climax agree to help Ananke explain things in a way that’s understandable.  The panel where Minerva struggles to produce even a tiny bit of miracle is heartbreaking in its way; I’m not ready to forgive Ananke for everything she’s done, but I can pity what she’s done to herself.  From the beginning, Ananke has been all about playing into recognizable tropes and archetypes with the way that she goes about arranging the dynamics of the Pantheon.  If you scrounge up enough lore about the entirety of human storytelling, she becomes a human cliche generator.  Ananke can’t tell a good story, even if she can tell very convincing lies (I’ve been re-reading the series lately, and there are so many nuggets of truth embedded in what she tells everyone early on), so she’s dependent on the power of her victims.  Laura taking that dynamic and subverting it with a genuine offer of assistance works pretty well for me.

Laura, in this moment you are so much better than you ever were. (Artwork by Jamie McKelvie, colors by Matt Wilson, letters by Clayton Cowles)