The thing that occurred to me today while I was thinking more about this issue was how the series’s structure slows the plot down significantly.  While we can totally expect that the events of the four time periods are interconnected and will continue to have major thematic resonance with one another, in pure terms of story things are developing extraordinarily slowly.  You can make an exception for the Year Ten period because that’s clearly a direct continuation of events happening in House of X, but the future time stuff all feels like it’s proceeding at a snail’s pace. 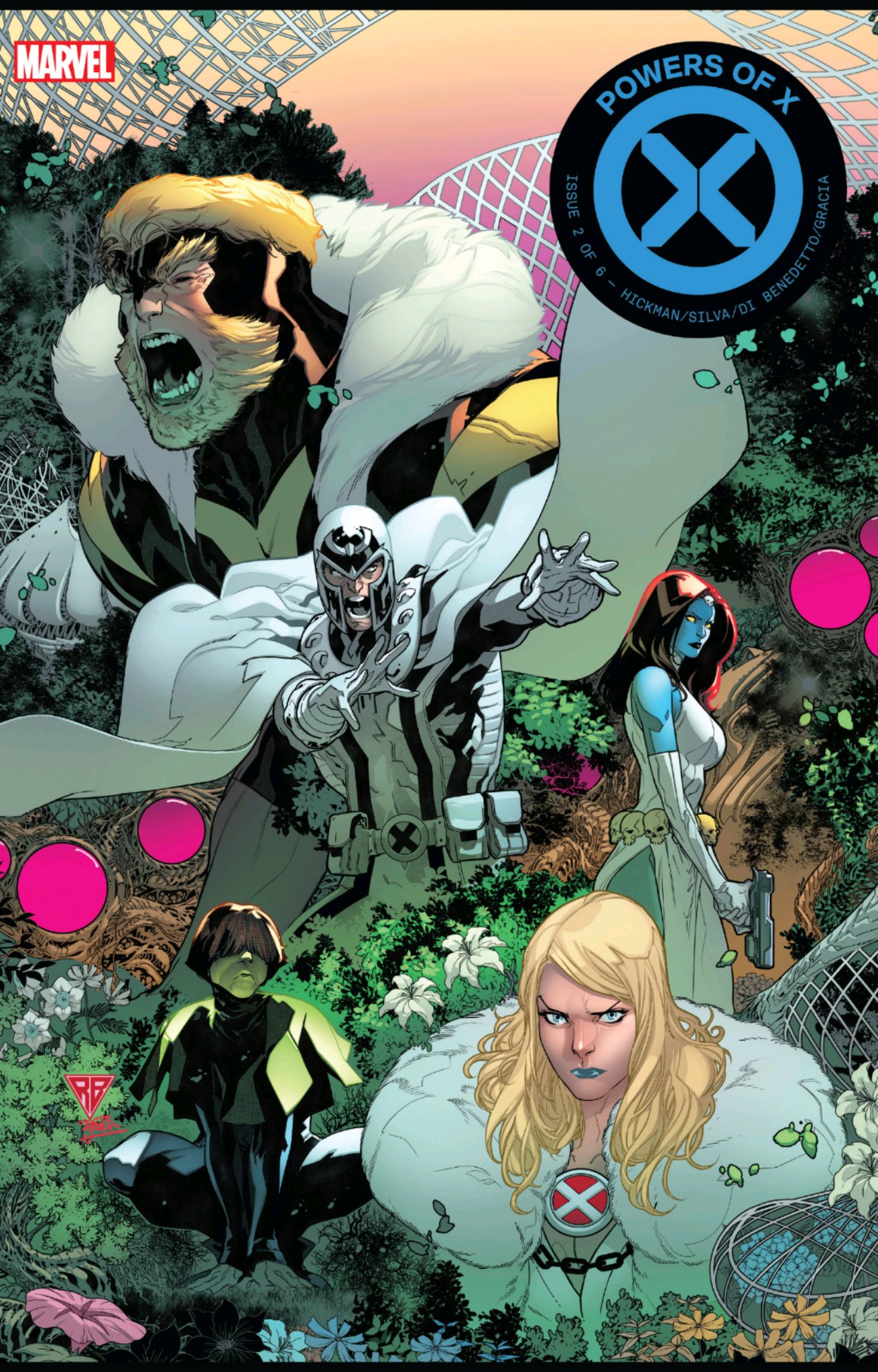 If you are like me and expect at least half of the characters on a cover to appear inside the issue, you will be disappointed to know that only twenty percent of these characters are present this week. (Cover by R B Silva & Marte Gracia)

In this issue, we learn that Apocalypse is leading the mutants of Year One Hundred, which isn’t really that surprising given Moira’s ambition to gather all the mutant leaders together under a single secret banner.  The team’s members, based on things they say, all appear to be Chimeras like Rasputin and Cardinal with the exception of Krakoa, who appears to have merged with Doug Ramsey’s body if not his consciousness, and Xorn, who might be one of the original Xorns because I don’t know what the rules are for someone with a star for a head.  Apocalypse is entirely himself because you just don’t go around making clones of Apocalypse (except when you do; I will be thrilled if this guy turns out to be Evan Sabah Nur, although I suspect that is not the case).  The mission that ended in the first Powers with Cylobel and Percival’s death was successful; the X-Men now have an index pointing them towards where to find the actual information they need (it’s in Salem Center, because of course it is).  There will be a suicide mission; most of these characters will probably die.  In the far future, the rulers of Earth have succeeded in attracting the attention of a Phalanx, which Hickman has repurposed from an alien techno-organic hive mind that occasionally tries to assimilate Earth to be the highest class of galactic intelligence and something that the Librarian apparently wants to talk to so that (wait for it) it can be persuaded to assimilate Earth.

If each time period had its own series running, we probably have enough story beats to reach a decent end for their respective first issues.  That’s probably a relatively mundane observation in comparison to some of the other much more interesting things to consider on a thematic level, but it’s there.  While I suspect the Year One Hundred plot will receive space to breathe more going forward, I continue to be suspicious of the end point of Year One Thousand; besides acting as a coda that relentlessly beats the drum of inevitable machine supremacy, I don’t know where it can go as a story or what impact it can have on earlier events without some capitulation to time loop nonsense.  But that’s neither here nor there; let’s talk themes. 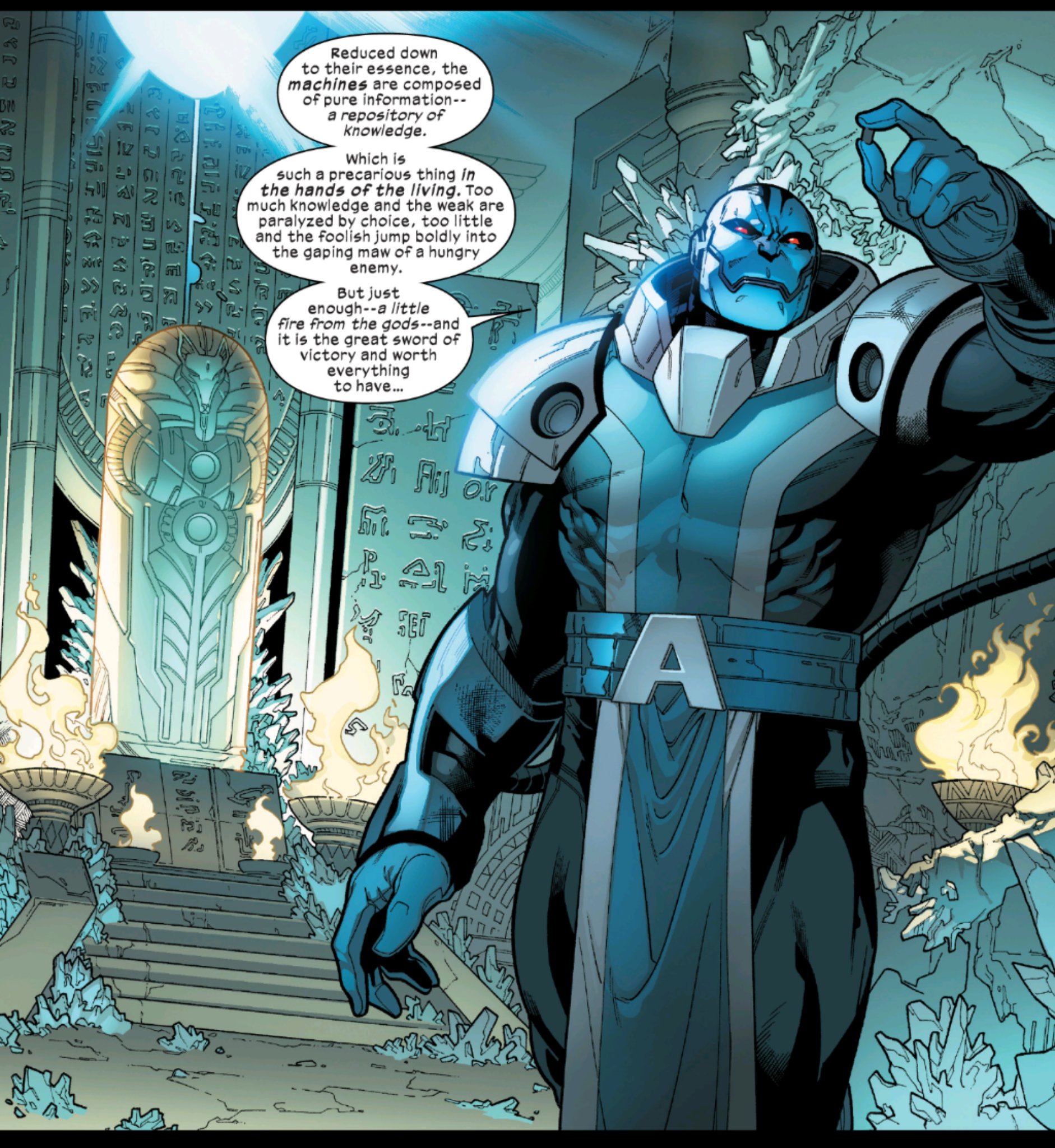 It gets touched on in each time period, but Apocalypse hits the idea most strongly in this monologue; information is a dangerous thing, and both too much and too little of it will lead to ruin. Also, there’s a sarcophagus in the background which clearly contains someone meant to survive into the far future. I’m not speculating about who it is, you are. (Artwork by R B Silva, inks by R B Silva & Adriano di Benedetto, colors by Marte Gracia, letters by Clayton Cowles)

Each scene in this issue turns on someone accepting information that has the potential to completely derail their lives but which is also vital to survival.  While Magneto gets the psychic Cliff’s Notes on Moira’s whole deal and has to decide if he’s going to alter his entire five year plan, Cyclops gets briefed on the existence of the Mother Mold (seen from space back in House of X #1) and asked to plan a mission to disable it (he readily agrees because Cyclops).  Both are familiar characters taking new information and running with it in the most pragmatic way possible; Scott and Erik are idealists who never shy away from the reality of facts when it’s time to act.  Erik embraces new information wholeheartedly despite the sheer volume of data that Moira offers carrying the potential to be massively disorienting; his resolve to see Moira’s plan to fruition echoes and inverts Apocalypse’s meditation on the choice paralysis that afflicts people who know too much.  Scott will need specifics for planning, but he accepts his mission before he fully comprehends what he’s going to walk into.  We don’t yet know if he’ll be “the foolish [jumping] boldly into the gaping maw of a hungry enemy.”

Meanwhile in the far future, the Librarian’s deal with the Phalanx serves as mirror of Charles and Moira’s offer to Magneto at the beginning of the issue.  The reflection comes in the agency of the Librarian; where Erik accepts Moira’s offer of knowledge with wariness, the Librarian and the society they represent have striven long and hard to catch the attention of some enlightened machines in the hopes of joining their collective.  Set aside the obvious pessimism of a future where AI decides to eliminate organic intelligence due to its inefficiency as a medium for computational power and consider what this future society’s goals appear to be.  Earth has apparently reached a point of internal equilibrium where humanity as we know it lives in a preserve and these blue skinned ascended humans that may or may not be descended from mutants feel they’ve reached the peak of their own civilization.  The only way to survive on a galactic scale in this future is to impress one of the massive machine intelligences that wander around the universe looking for new resources to expand their own brain power and, once the impression has been made, to get the machines to assimilate a civilization into itself.  The scale of survival has expanded so far beyond individuals and subspecies at this point.  If all that Earth is and was will continue in Year One Thousand, it has to adapt to the new rules and offer up its own information to the machine gods.

Update: The latest HoX PoX ToX is live at Xavier Files, so here’s a link to that very good discussion of stuff that is probably relevant to thinking about this series.