So in our ongoing Sims game, the protagonist has turned out to be Rory O’Leary, this guy who probably had a childhood very similar to Ferris Bueller’s, but then realized that he couldn’t get by on charm alone once he left home.  This fact did not stop him from trying his best to keep it going though.

When last we left off with Rory, he’d been kicked out of his artist’s commune for, well, never producing any actual art while pursuing his dreams of smooching practically everyone (he succeeded) and becoming a social nexus through which all members of the larger Sim community would pass through to meet one another (still in progress).  He had virtually no work experience, and his skill set was limited to being a decent cook when he could be bothered to do more than grab leftovers from the fridge and a fair charmer.  He’d spent months mooching off the largess of the Rachael and Jason Sims, and so he had very little in the way of things he could call his own (I think when he got the boot he was forced to leave behind all his trophies from going on some pretty excellent dates).  Desperate to escape to a place where he could sort of start over without all the baggage of being the town failson, he moved to the cheapest place available in the Forgotten Hollow.  Realizing that living on his own was way less fun than cohabitating in the party house, he decided it was time to settle down.  Flash forward, and he’s living with his new wife Angela, the sweetest member of the Pleasant family.  Angela, like Rory, has virtually no skills.

Unlike Rory, Angela has a strong sense of motivation, and not long after moving into Rory’s dump of a house, she started figuring out how to make sure her life wasn’t one endless stream of regret.  While Rory embarked on a new dream of becoming Simstafamous, she got a stable government job that would support her dreams of starting a family.  Also, she took up playing chess in the neighborhood park with the nice gentleman who lives alone in the big mansion up on the hill, Vladislaus Strahd IV.  While a little odd, Vlad was someone Angela found generally pleasant, and definitely more engaging than her hot dummy husband (she does love him, but she knows there’s not there’s not much going on upstairs), and so she started to formulate a plan for how she could get her family settled in that nice big house.  All it needed was a baby bump.

While Vlad was generally happy living alone in his old mansion that he’d owned since he was Vladislaus Strahd I, the prospect of having a stable of live-in meals appealed to him, and Angela, despite being extremely sweet, was an excellent chess partner.  When she informed him that she and her ridiculous husband were going to have a child and would need more living space, but with rents what they were had nowhere they could turn to (Rory would only allude to vague “reasons” why he wouldn’t ask her parents for help), Vlad privately rolled his eyes but agreed to take them on as live-in housekeepers.

Rory was not terribly excited about the prospect of moving in with the old weirdo (the dream he had about Vlad breaking into their house and sucking Angela’s blood felt far too real), but his months working the like mines had taught him that there were no easy fixes in life.  He and Angela weren’t making enough on their salaries to afford the renovations they needed to make a proper baby room, and Vlad’s offer was generous.  They moved in the week after Angela told him she was pregnant.

The intervening years have been a rush of shifting priorities for everyone in the Strahd-O’Leary-Pleasant household.  Rory and Angela got caught up in climbing their respective career ladders; Vlad found that he has a real creative spirit and spends his nights writing music and books.  Annika, Rory and Angela’s daughter, has adopted the best of traits of her parents: she’s a social butterfly like Rory, a kind soul like Angela, and consumed with a creative spirit like Mr. Vlad, her sometimes caretaker.  When Vlad ended up getting involved with her mom’s twin sister Lilith, Annika just figured this was how houses work.  People like to live in large groups, even the antisocial ones who stay up all hours of the night and sleep through the day. 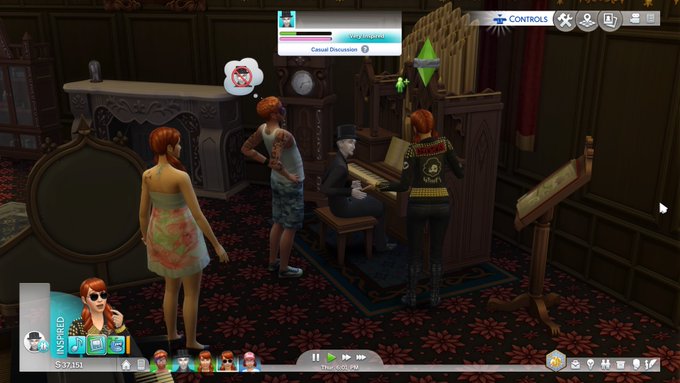 That rare moment when all the adults in the house set aside their differences to enjoy some fun pipe organ music.

For Rory, things have become a little rote.  He’s cultivated a razor sharp wit to accompany his burgeoning social media empire, but he still hasn’t let go of his dream of becoming the ultimate life of the party some day.  That Angela has that glint in her eye that suggests she’d like to have another kid (didn’t they just finish raising Annika to a point where she’s not totally dependent on them?) doesn’t deter him from hoping for more of the easy life.  Sure, his creepy landlord (who must be a vampire, why has no one else realized this?) has become his brother-in-law, and things are a little awkward with Lilith ever since that time she beat him up when he was dating both her sisters and parents simultaneously (has she always been this mean or has it gotten worse since she met Vlad?), but generally things are okay.  He threw a nice dinner party for his old commune friends the other day, and that was fun.  There’s still so much that Rory wants to do with his life, and he’ll get to it one way or another. 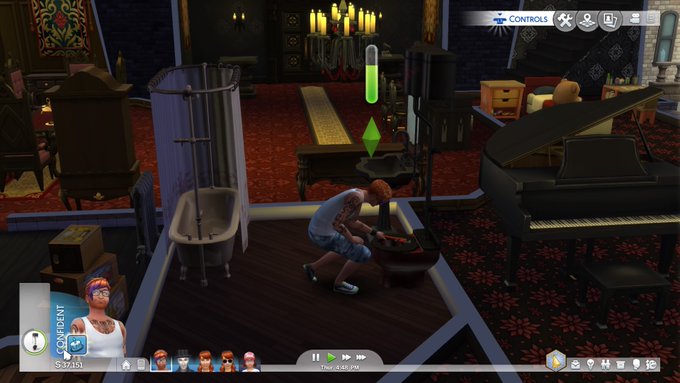 Right after he finishes upgrading this toilet.