There are phases where you plateau when you’re developing a new skill, and then there are phases where it feels like you’re just taking off.  After last week’s relatively low output of two drawings (to be fair to myself, the one I spent the most time on did have two figures who are interacting with each other), I upped it to six.  A couple of them are definitely the result of quick drawing sessions, but the last four have felt significantly more dynamic and visually interesting than anything else I’ve done in a while (and I didn’t use photo reference for them either). 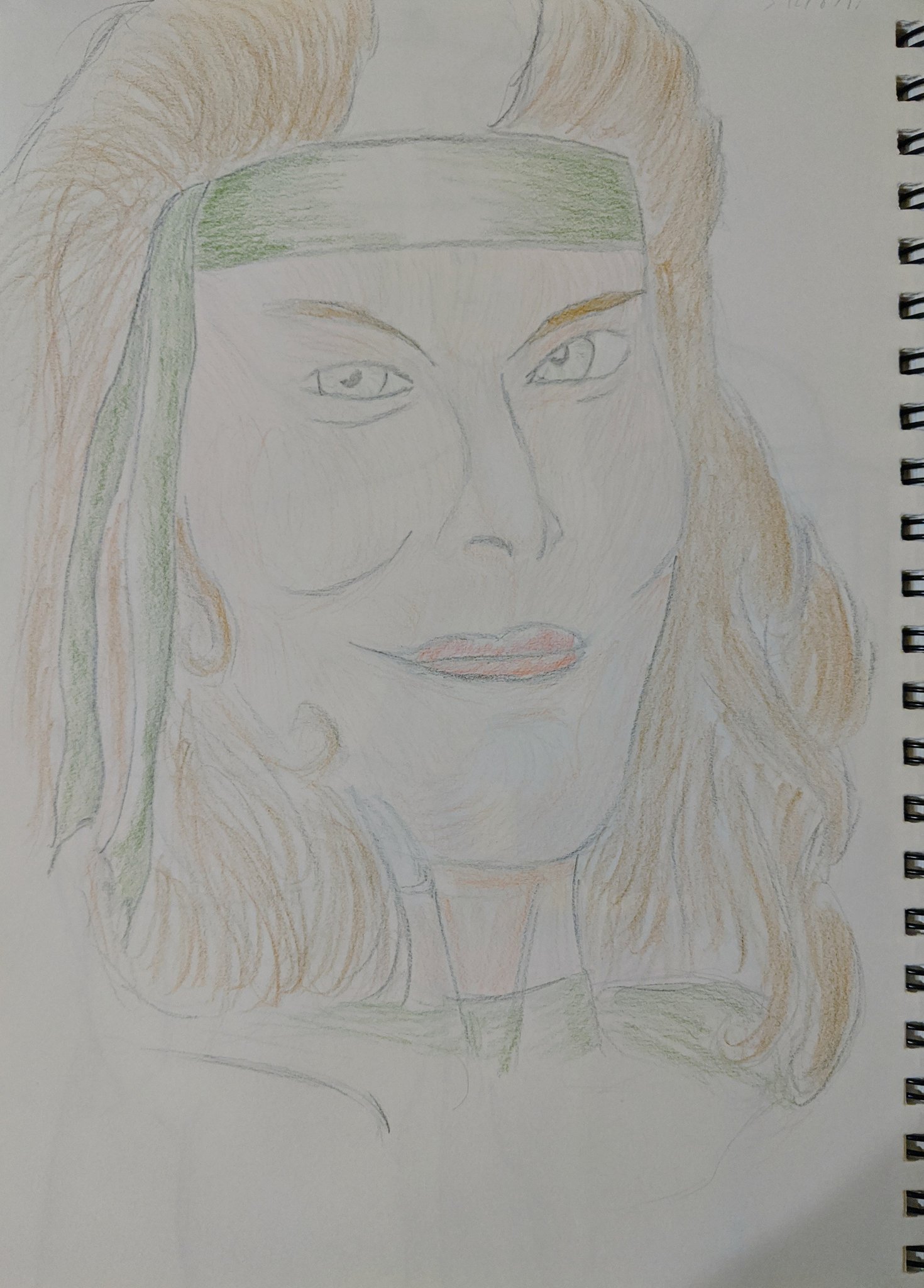 After doing a few figure drawings, I find that I like to reset with a portrait.  It’s fun to work on a face in detail and try to draw out the parts that convey more subtle emotions.  For this week’s portrait I drew Rogue, and I used a photo reference to get the basic shape and expression, but then I elaborated on it with her traditional trappings, like the big wavy hair with the skunk stripe and the green accents.  It’s pretty obvious to me that I rushed this one (from roughs to colors, I did the whole thing in under an hour), and I feel like with some more care it could have turned out much better than it did. 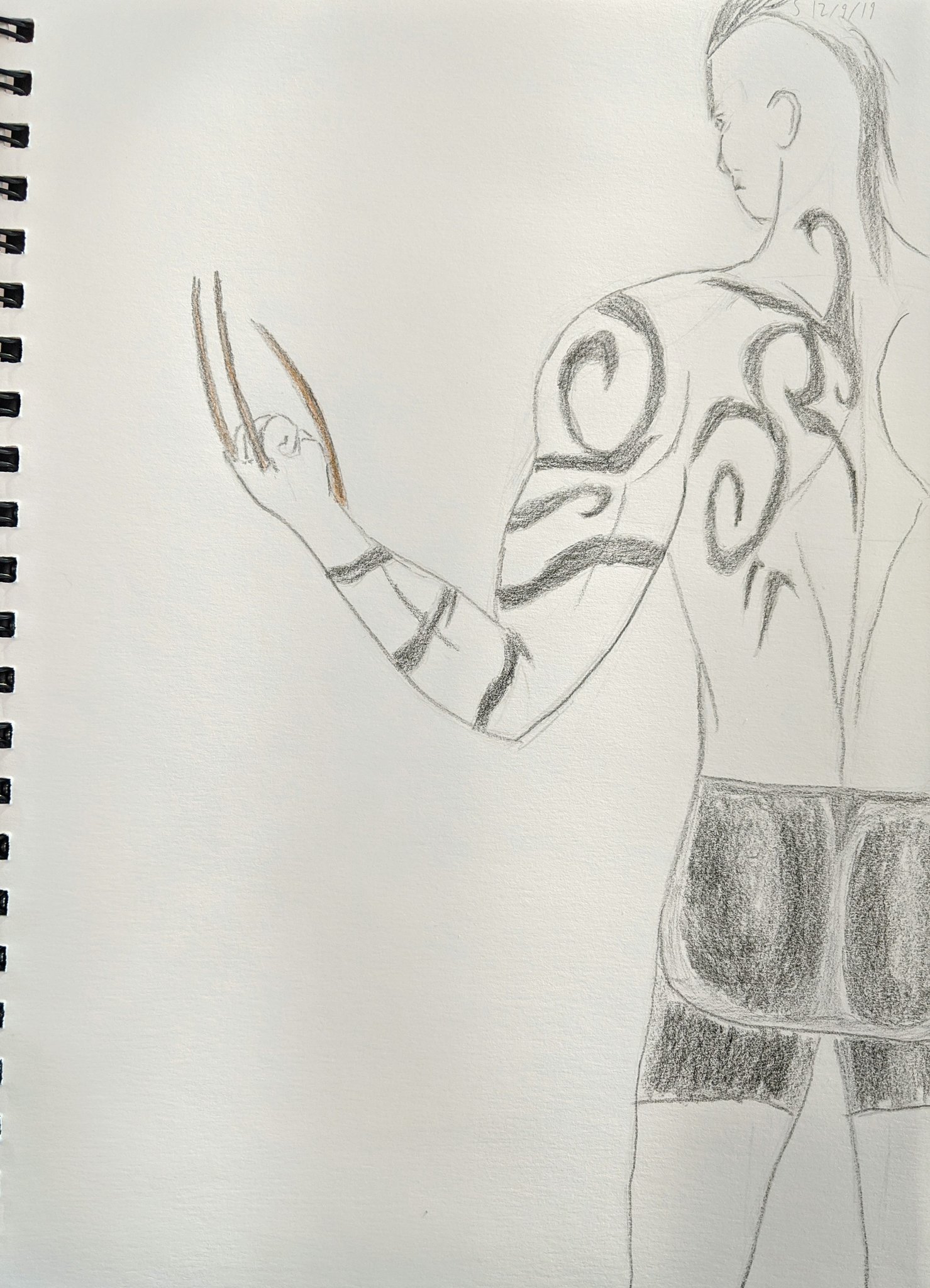 This minimalist sketch of Daken was another rush.  It’s probably my least favorite of the set, but I think I did a decent job with the musculature on the back.  Drawing his tattoo was fun, especially because its abstractness and intricacy means that there’s no real set way to do it.  Much of my drawing time was spent just looking for good reference panels of his back, which are harder to find than you’d think.  I feel like the proportions of the arm are slightly off, like if he were to lower it down by his side it’d be far too long in comparison to his torso.  Oh well. 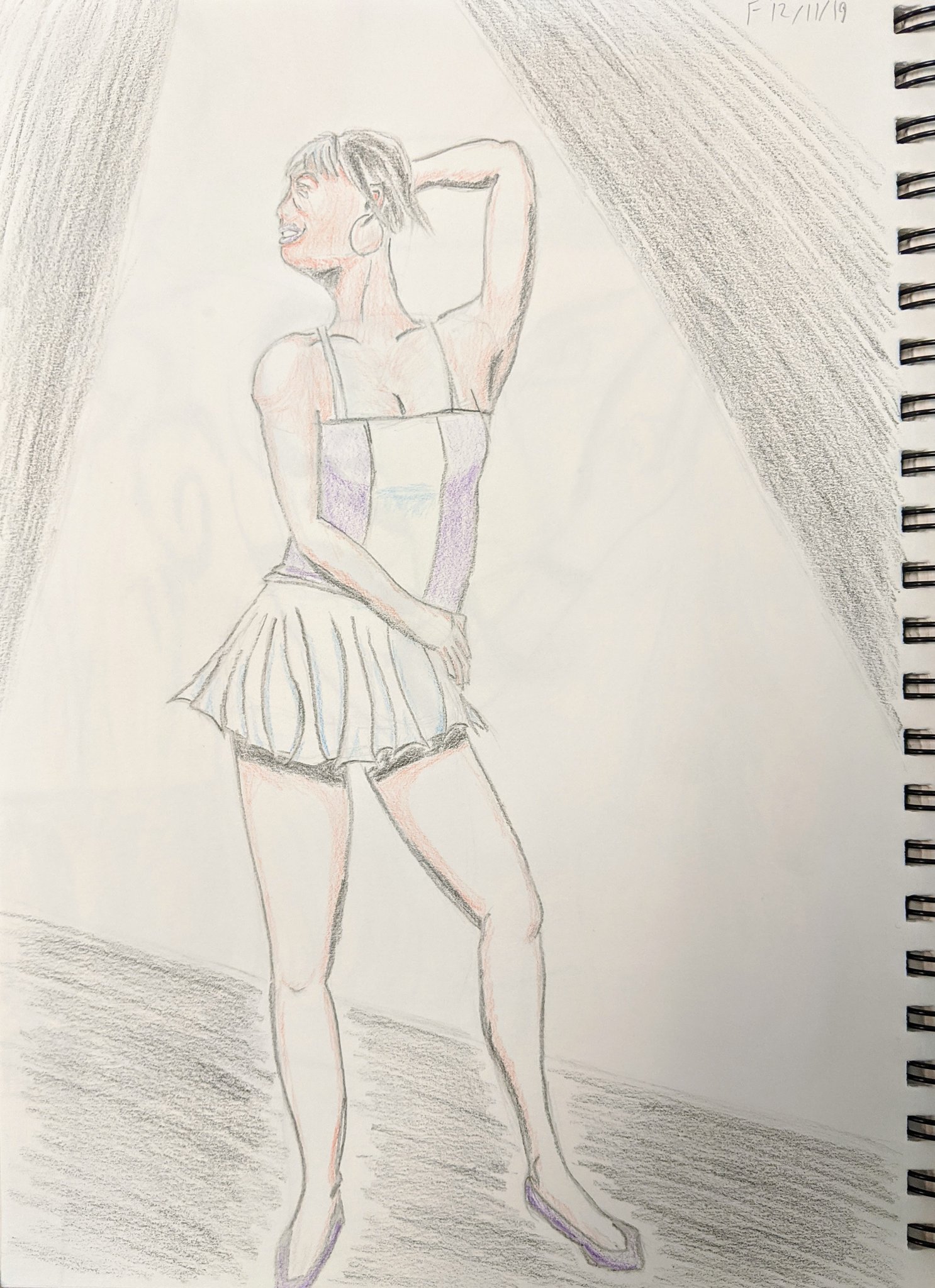 Here’s where my drawing week started to get really good.  The character is Tempus, who I drew during Inktober this year, so I wanted to try to do something different with her.  I think it’s really fun to draw characters having fun instead of just fighting, so I imagined what sort of outfit she might wear for a night out dancing.  There are elements that are still recognizably Tempus, from the tennis skirt to the purple and white vertical stripes on her top, but it’s generally a far more casual look.  I didn’t use any reference for this pose, so I’m actually very pleased with how it turned out.  If I look at it long enough, I think I’m probably subconsciously mimicking the finishing pose from Yuri’s short routine in Yuri!!! On Ice.  I just realized that; no wonder it looks good!  My primary complaint with this piece is that I didn’t really get the angle of the head right, so the silhouette of the nose feels off.  Tempus is white, but I think I ended up making her look more East Asian in the end.  Still, I feel like the gestures are really strong here, from the arm across the stomach to the set of the shoulders (I don’t think I typically do good shoulders). 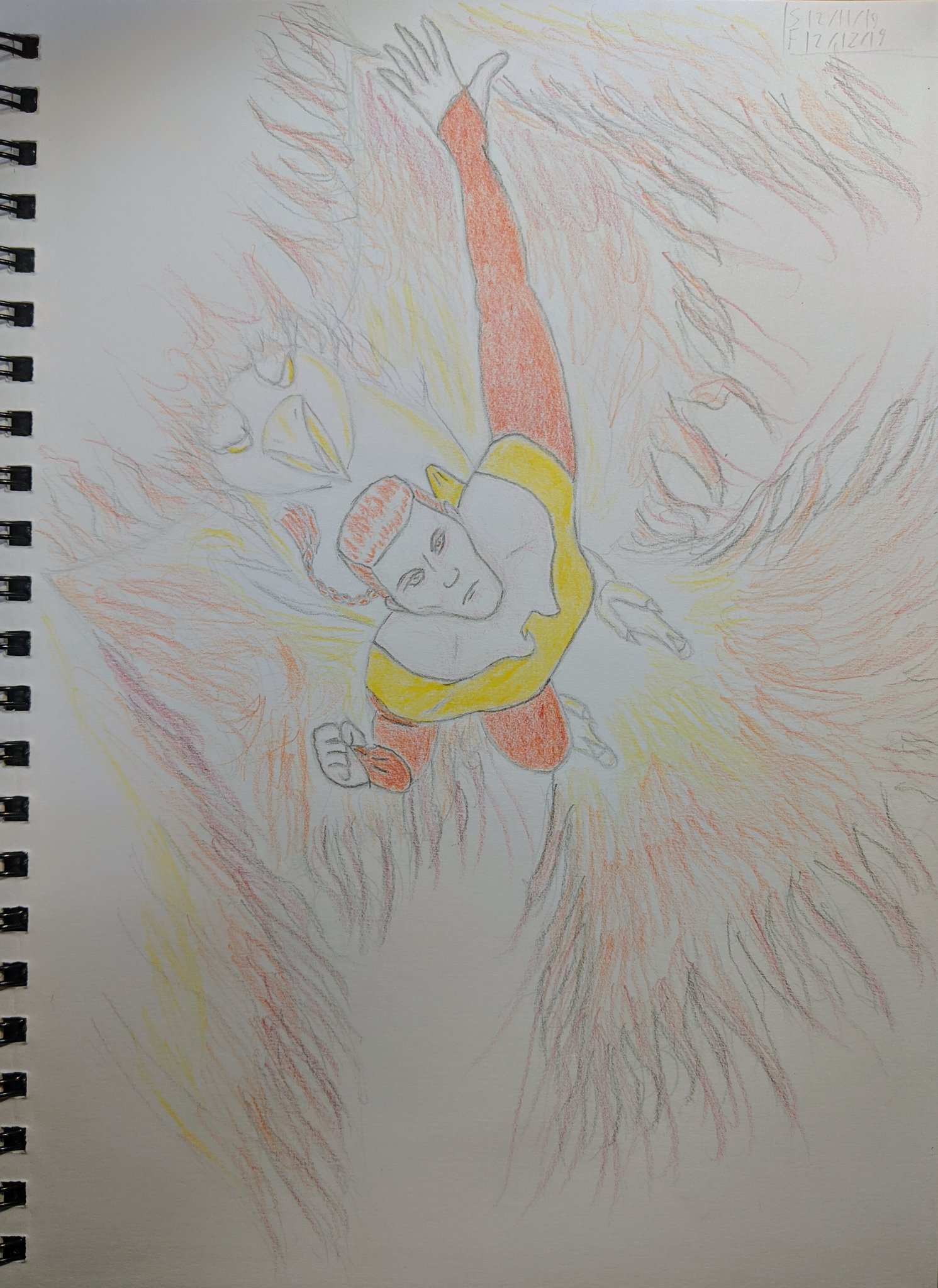 This is the high point of the week.  It’s a real delight to periodically draw a character who’s relatively famous in X-Men fandom, and to have such a clear vision from the beginning of what I wanted to do with the picture.  Rachel Grey as Phoenix has gone through a lot of iterations since she first appeared in the ’80s, but I thought it’d be fun to go with one of her less prominent looks.  There was a brief period just before she got written out of the ongoing plot in the late ’80s where she fully embraced Phoenix as her legacy identity (I think this might have been the first time she actually adopted a genuine costume too) where she had this really rad, super simple outfit that was basically a workout leotard with a gold bodice and red limbs and just a hint of styling on the neckline with the stylized raptor head.  She wore gold gloves in the original look, but I’ve always liked the look of long sleeves hooked over the thumb, so I streamlined a little bit.  The pose is probably inspired by stuff like the double page spread in All-Star Superman where Superman’s flying towards the sun.  I think what I’m happiest about is the deeply androgynous look about Rachel here; she was always a gawky looking character before Alan Davis redesigned her for Excalibur, and I appreciated that nonstandard look.  The Phoenix in the background probably could have been done with more care, but I reached a point in working where I was just ready to be done so I could move on to something else.  I still like it a lot (and the shot works in both portrait and landscape orientation!) 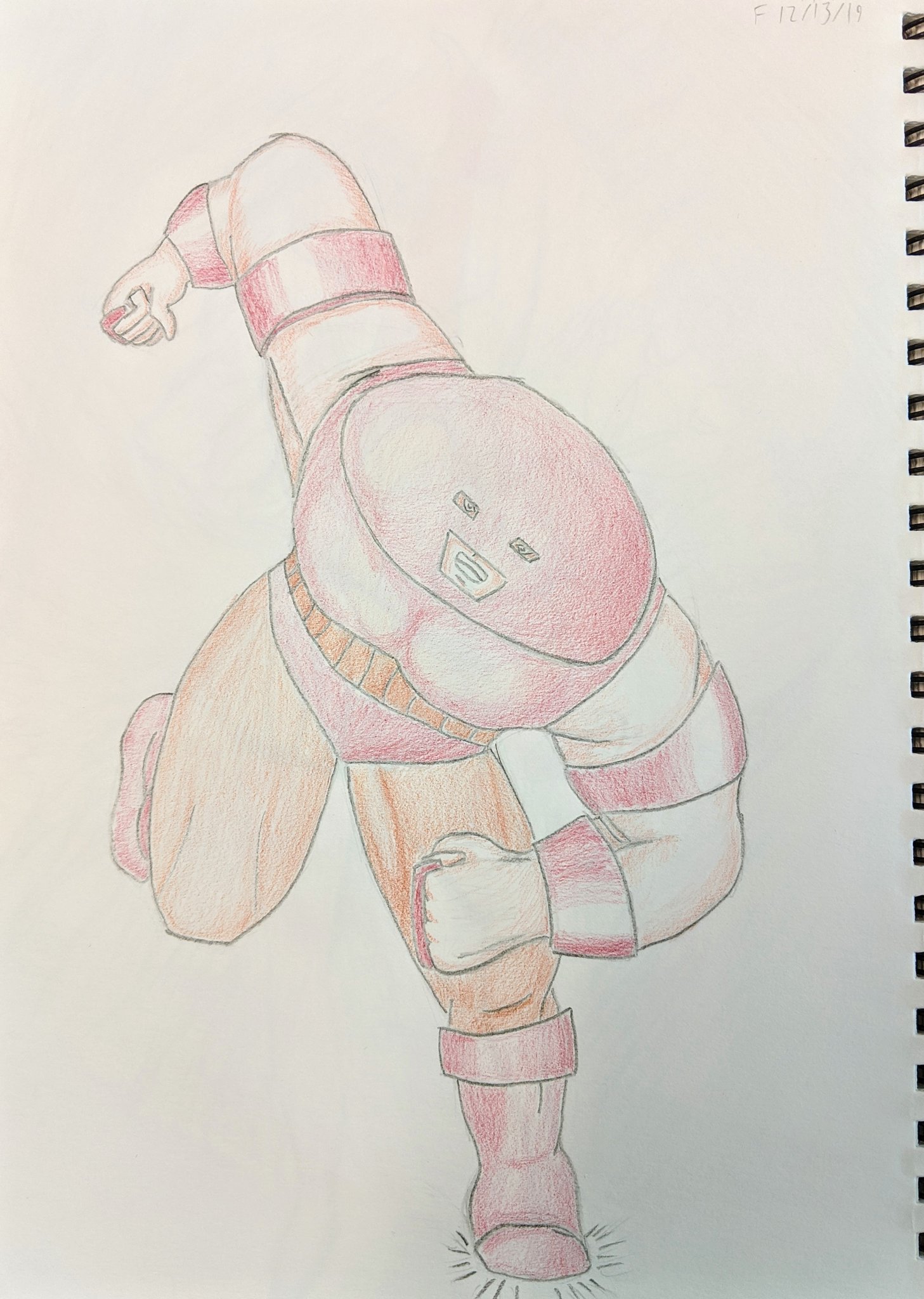 While Phoenix was the highlight of the week, it wasn’t the last thing I did.  This picture of Juggernaut feels very classic to me; I didn’t play with the costume design at all, and I went for a pretty straightforward action pose, but it generally works.  The eyes are too wide set, but there are some range of motion issues with the Juggernaut’s design that can be hard to contend with when you think about him in action rather than as static images.  It was a lot of fun to draw someone with super bulky muscles though; the proportions feel way more forgiving than on someone who is supposed to be thin. 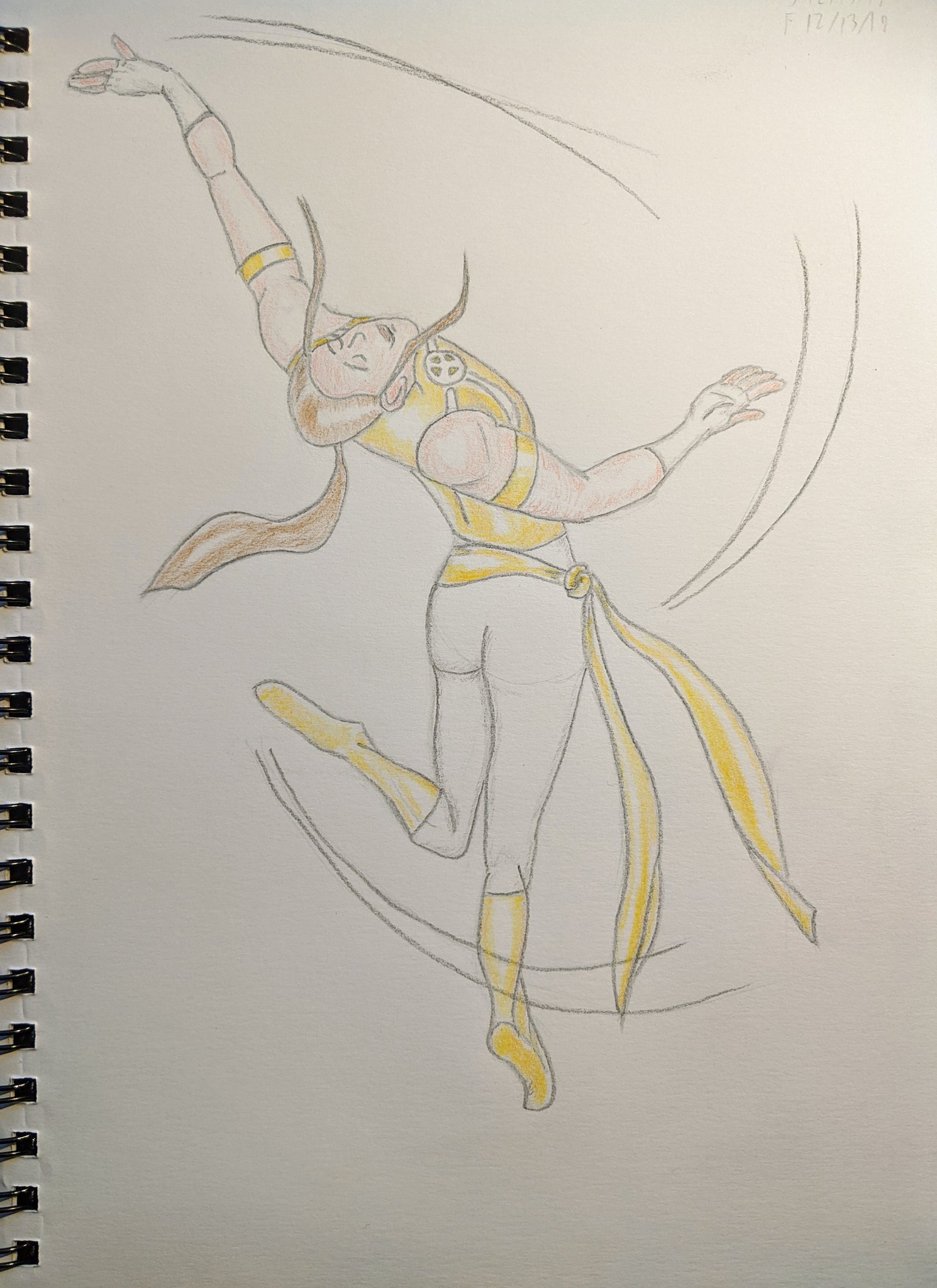 I really like everything I did with this picture of Wind Dancer (her power is that she can manipulate the wind; it’s very what it says on the tin), but after I finished it I realized that I really need some kind of background to give context.  She’s supposed to be flying, hence the back bend and the arched foot, but because there’s no background there’s the problem of the picture reading like she’s just doing a really bad en pointe (or whatever you call that ballet position).  I tweaked her costume a little bit, but she’s such a minor character in the broad X-Universe that most folks wouldn’t notice.

I have space for thirteen more drawings in my sketchbook, and I don’t know if I’ll be able to fill them before New Year’s (especially because the holidays are going to be so busy with Dad coming to visit).  I’m trying to take a laissez-faire approach to it to it, but I also know myself, and there is definitely the possibility I’m going to mildly fixate on it as we do our usual celebrations.