I was initially really reluctant to keep going with Crowded on the blog because I honestly wasn’t sure what would be interesting to say about it, but I was re-reading the second issue the other night, and I remembered that there are so many delightful character moments packed in that I figured there might be something else I could tease out.  The big thing I realized as I was reading issue #2 is how it hits a lot of the beats that are missing in the first issue.  There was all this setup for the world and the premise in the beginning, but this is the issue where we really get to sink into the characters and their respective deals.

This cover makes Charlie out to seem very sinister, and while there’s definitely more to her than we know, this whole thing with the invaders is more of a weird, stupid accident. (Cover by Ro Stein & Ted Brandt; Image credit: Comic Vine)

The cover for the issue serves to remind us of the way the first one ended: a gang of invaders, looking for an opportunity to cash in on Charlie’s Reapr campaign, have arrived at Vita’s safe house with a load of heavy weaponry.  The paper doll cutouts for the invaders and Vita with Charlie looking over the whole scene suggests some sort of deliberate sabotage, which doesn’t quite make sense given the fact that this gang that shows up is all about trying to, y’know, kill Charlie.  In a more meta sense, the point of this cover is to highlight a defining feature of Charlie and Vita’s relationship: Charlie is manipulative and Vita is forever reacting to bad situations that her client thoughtlessly puts her into.  Besides establishing that core dynamic, it’s also pretty fun that the creative team has opted to cast Charlie in a sinister light this early on.  We gather that the massive assassination campaign against her emerged seemingly from nowhere, but there are just these tiny hints that she’s hiding something big.  It’d be pretty wild if Charlie turns out to be a villain by the end of the series, and we were getting hints of it here.  Of course, that’d be very counterintuitive since the entire premise is predicated on the idea that she needs to stay alive, but I can see a narrative arc where Vita gets betrayed by Charlie so many times that it culminates with her accepting that she doesn’t have to be responsible for everyone.

That’d get pretty dark though.

For now, things are mostly extremely light and chaotic.  The sequence with the home invaders is minimally tense because they’re clearly amateur bounty hunters who are taking on Vita, whose vulnerabilities only manifest in the form of extreme mortification that her private life is being so completely disrupted by this oblivious jerk.  Even the punchline of the scene (because it’s basically an action joke) with Vita accidentally lodging a kitchen knife in one invader’s sternum hinges more on embarrassment and exasperation than any real sense of danger.  “Please don’t let me have accidentally killed this idiot” is probably the most endearing sentiment to read from an extremely competent action hero ever (I get some mild Vash the Stampede vibes from Vita, which I suppose makes sense; they are both very much of the gentle badass character type).

The best jokes are snappy and reveal character. This one is snappy and plays differently after you read a couple pages ahead and find out how Vita got her house. (Artwork by Ro Stein & Ted Brandt, colors by Triona Farrell, letters by Cardinal Rae)

From this initial exploration of Vita as a person who takes pretty much everything in her life seriously, we get dropped into a bunch of her old interpersonal drama.  Her ex-girlfriend’s a police detective!  She gets attached to her charges!  She’s living in a bygone era because she’s just too good for this present moment!  It’s all delightfully insightful and a little bit voyeuristic.  Vita signed up for a protection job because she presumably needs the money, and now we’re just learning all kinds of very personal things about her because Charlie is a chaos muppet.

The issue’s second act moves the action away from Vita’s house to a random club that Charlie insists on going to despite having just survived a home invasion.  The sequence provides a massive tonal shift as we go from Vita’s home turf to an environment that Charlie is clearly extremely comfortable in.  She works the bouncer on the door, insinuates herself into the VIP section and proceeds to draw massive amounts of attention to herself by attempting to strangle the celebrity influencer/pop star/whatever who she’s learned backed the Reapr campaign.  It’s fun to see Charlie showing off her competencies, especially from Vita’s perspective as she desperately tries to maintain control of the situation.  That things go belly up is totally unsurprising (I think we will quickly learn that any time Charlie suggests a thing, it is inevitably going to end in mayhem), but it’s a joy to see Vita navigating the situation while managing her extreme embarrassment and total frustration that this was all avoidable if she had a client with any sense for self preservation.

The third act resets to a place where Vita should be more comfortable, but it also creates this deeply vulnerable moment for her that gets played for laughs.  For reasons that are not yet explained, Vita has contacts with a group of teenage hackers who hang out in the back room of her local comic shop.  They provide some much needed explanation about the whole Reapr thing while being totally obnoxious brats who are giving information to a couple of characters who in-universe already understand everything that’s going on.  It’s a lovely subversion of the novitiate protagonist who needs all the basics of the world-building explained to them.  Much more interesting (to me at least) is the way this scene establishes some of Vita’s deeper sensitivities that she really would rather Charlie not know about as her client.  We get that Vita’s an excellent bodyguard, but the realization that she’s a comic nerd comes pretty much out of nowhere.  Vita isn’t just the cool action hero with the heart of gold, but she’s also coded as very specifically a member of the comic-reading community.  She’s a big nerd who enjoys her stories, and this obnoxious normie who lives in a world of shiny clubs and shallow relationships intrudes in such gut-wrenching ways.  It’s a good laugh that Charlie ribs Vita for probably owning a cape, and at the same time it’s a pretty vulnerable moment.  Most of us don’t expect our jobs to expose the most personal parts of our lives to clients and customers suddenly and incontrovertibly.  Charlie probably forgets that Vita is into the funnybooks ten minutes after they leave the comic shop, but it’s still a deeply anxious experience.  This relationship is going deep in all the wrong ways, and I’m totally here for it. 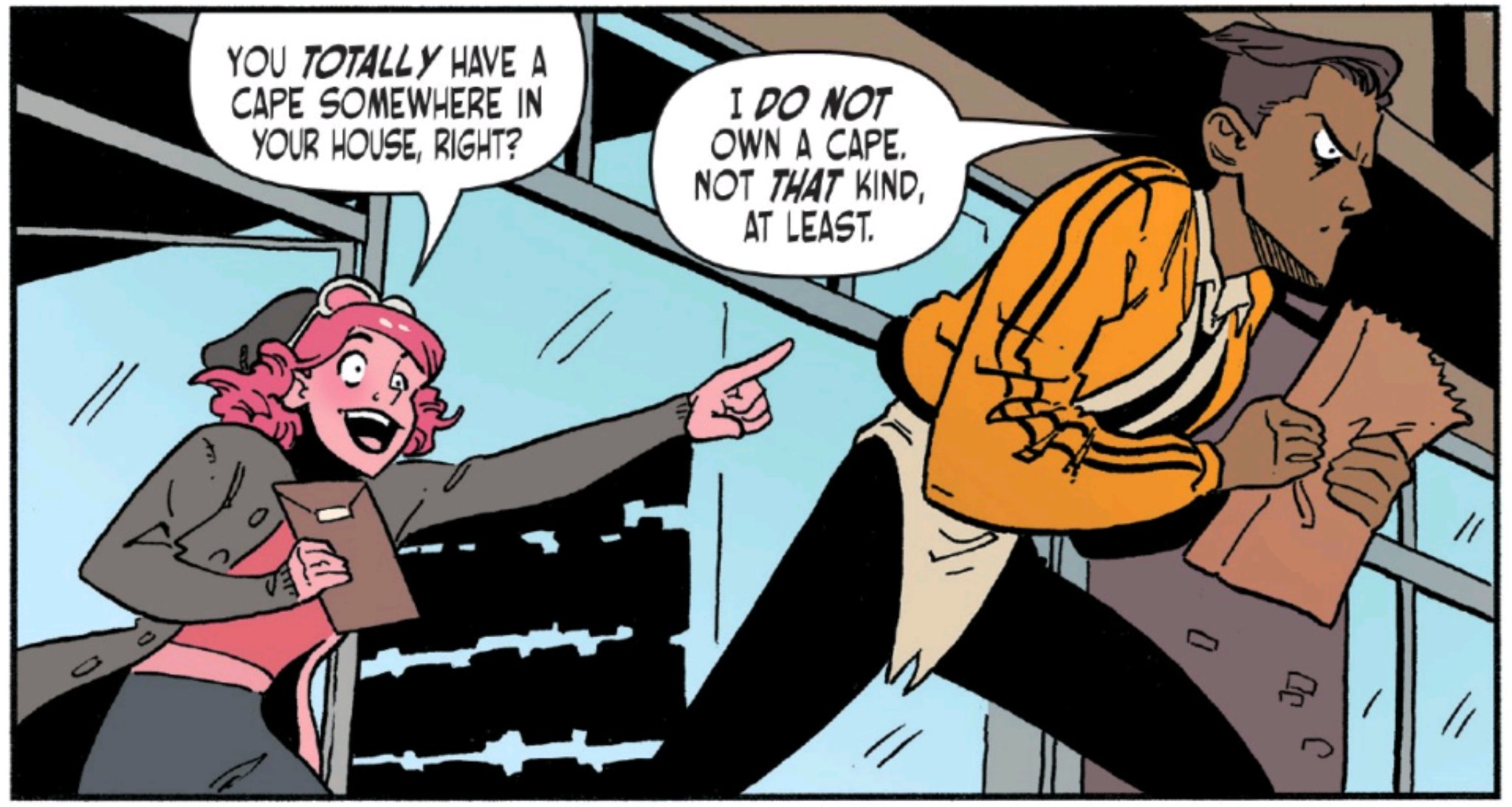 They are both adorable and I want Vita to just have a few moments’ peace with her comics. (Artwork by Ro Stein & Ted Brandt, colors by Triona Farrell, letters by Cardinal Rae)