So New Year’s happened and then I kind of went radio silent for a few weeks on here, which might feel awkward if I hadn’t resolved after the first week to just not beat myself up about the level of activity on the blog.  I’ve jumped pretty heavily into playing with my new art materials, especially the markers that I got, and so a lot of my creative energy has been focused on producing visual art over doing a lot of writing.

When I look at the backlog of comics I have to read, I mostly just feel a bit of despair at the prospect of diving into all that material and devoting brain cells to unpacking it.  I have the entire run of Pretty Deadly: The Rat to look at (I bought it monthly and just stowed the issues until the whole thing was out so I could read it in one go), and my brain just spins when I think about trying to analyze it; Kelly Sue DeConnick produces some really excellent stuff, but I always feel under equipped to tackle her work.  Slightly less daunting but still worthy of sighs of aggravation are the outstanding issues on the Life is Strange series as well as Die #10 which really does deserve some deep thought that I just have not had the bandwidth for lately.

I think the sense of overwhelm is coming from a combination of low-level exhaustion from the end of the holidays (I spent two weeks unclenching from work, and now I’m back to work while needing time to unclench from celebrations) and the general ennui that tends to pervade January.  It’s legitimately the worst time of year as the days are still extremely short, the holidays are done, and also at work we’re all scrambling to drag students over the finish line of first semester.  It’s terrible, and the sense that I should be doing more with my free time is this low-grade buzz in the back of my head that always assails me around the end of the work week as I look at the weekend and wonder if this will be the time that I jump back on the blogging treadmill.  I’m working on this post on a quiet Saturday night at the end of the month, and I honestly don’t know if I’m going to feel like writing more once this update is done.

The saving grace here is that Rachael and I have discussed this general malaise, and we agree that a lot of it just seasonal.  Eventually things will improve (I suspect that I’ll feel better right around the time I get grades finalized and hammer out some lesson plans for the start of February), but in the mean time, it’s okay to accept that this is a sort of Baconalia (that is, a festival of sluggishness that is embodied by our Bacon plushie who just sits on the couch all day).  It’s okay to take breaks from making stuff, especially when making stuff is something you really enjoy doing.  Of course, I then have to remind myself that I haven’t stopped making stuff exactly; I’ve just shifted my focus to something that’s not well suited to a blog format.  I’m posting artwork on my Twitter account almost daily, and that’s been really fun, although the eternal gnawing views monster is never happy with the modest but genuine engagements I get through that outlet.  It’s the worst to make a thing that I find generally satisfying for myself and then have the satisfaction tarnished as I wait hopefully for someone to like or share my work.  The refrain that you should always make art for yourself first is cold comfort when you don’t receive frequent external reinforcement that the art is actually good.

Anyway, here’s some stuff that I’ve made in the last few weeks.  I like a lot of it, even as I wonder how I could have executed it better.  In the mean time, I’m going to go back to doodles and television and reading comics just for fun and thinking about tabletop games that may or may not happen. 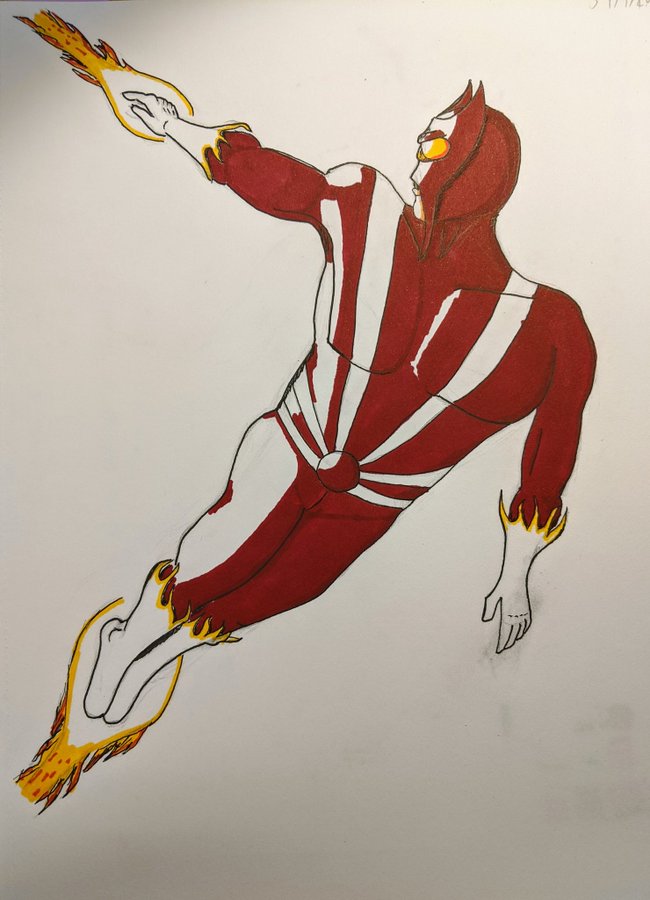 This was fun as an experiment in playing with extreme highlights.  I liked the effect on the head when it was half colored, so I decided to lean into that concept of the character’s energy blast being so bright that it whites out parts of his body.  It’s fun, though these kinds of pictures often emphasize to me how basic my grasp of muscular anatomy is.  I was really irritated that I had to keep redrawing the hand; you can see the erasure marks on the paper from where the graphite got ground in after I overworked it.  While the coloring is okay, I actually think this image is kind of boring and static; the pose feels stiff when I look at it.  I think something’s off with the perspective, like I didn’t foreshorten the torso enough in comparison to the legs to give a strong sense of the character moving towards the viewer, and as a result he just looks like he has stubby legs while he’s moving parallel to the camera. 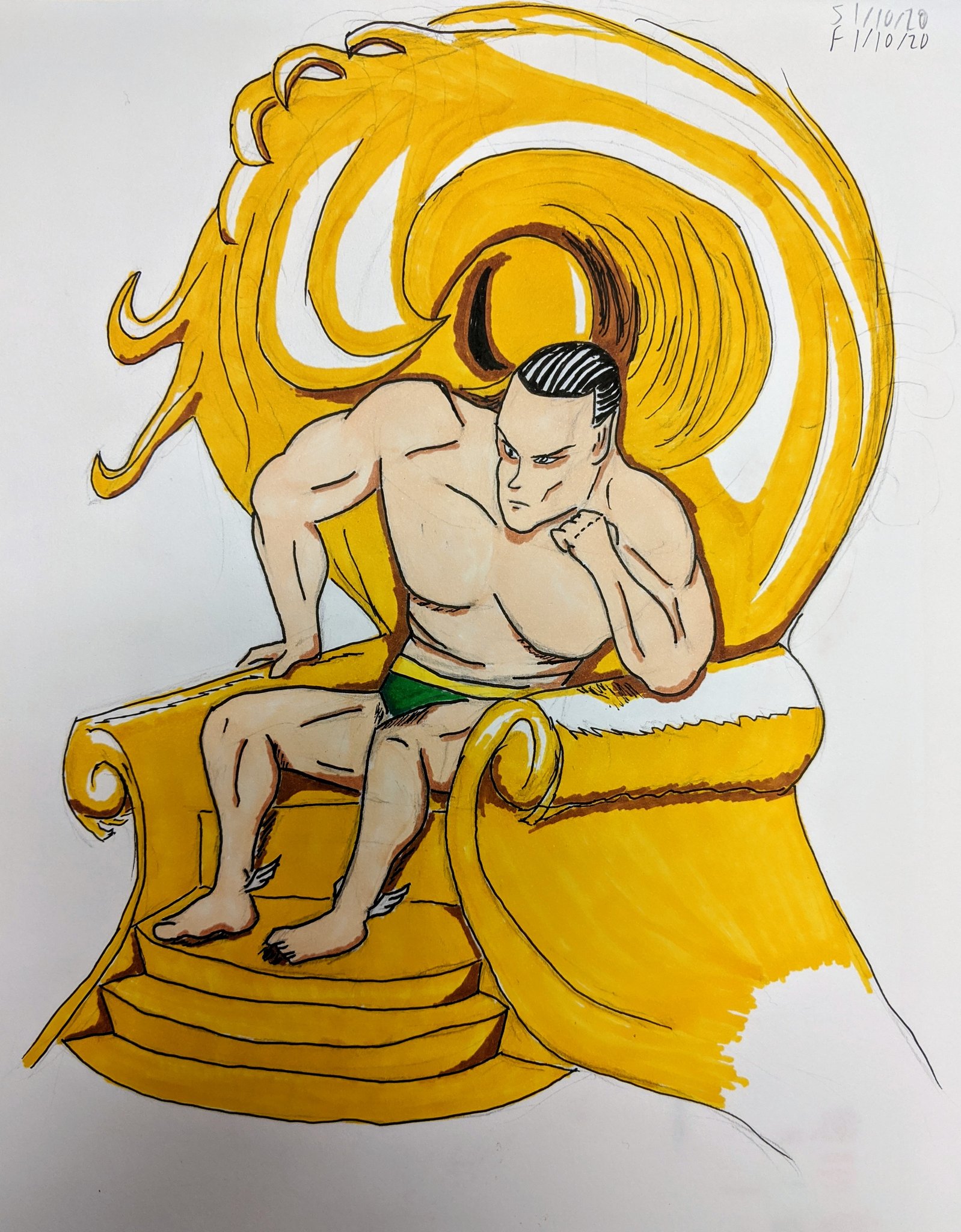 I was playing around again with foreshortening in the torso here, and again I think I whiffed the execution.  The figure definitely reads as leaning over, but he just seems top heavy in comparison to his legs.  I didn’t get the position of the hand right, so he’s posed in the middle of sitting up instead of looking like he’s resting his weight on his elbow. 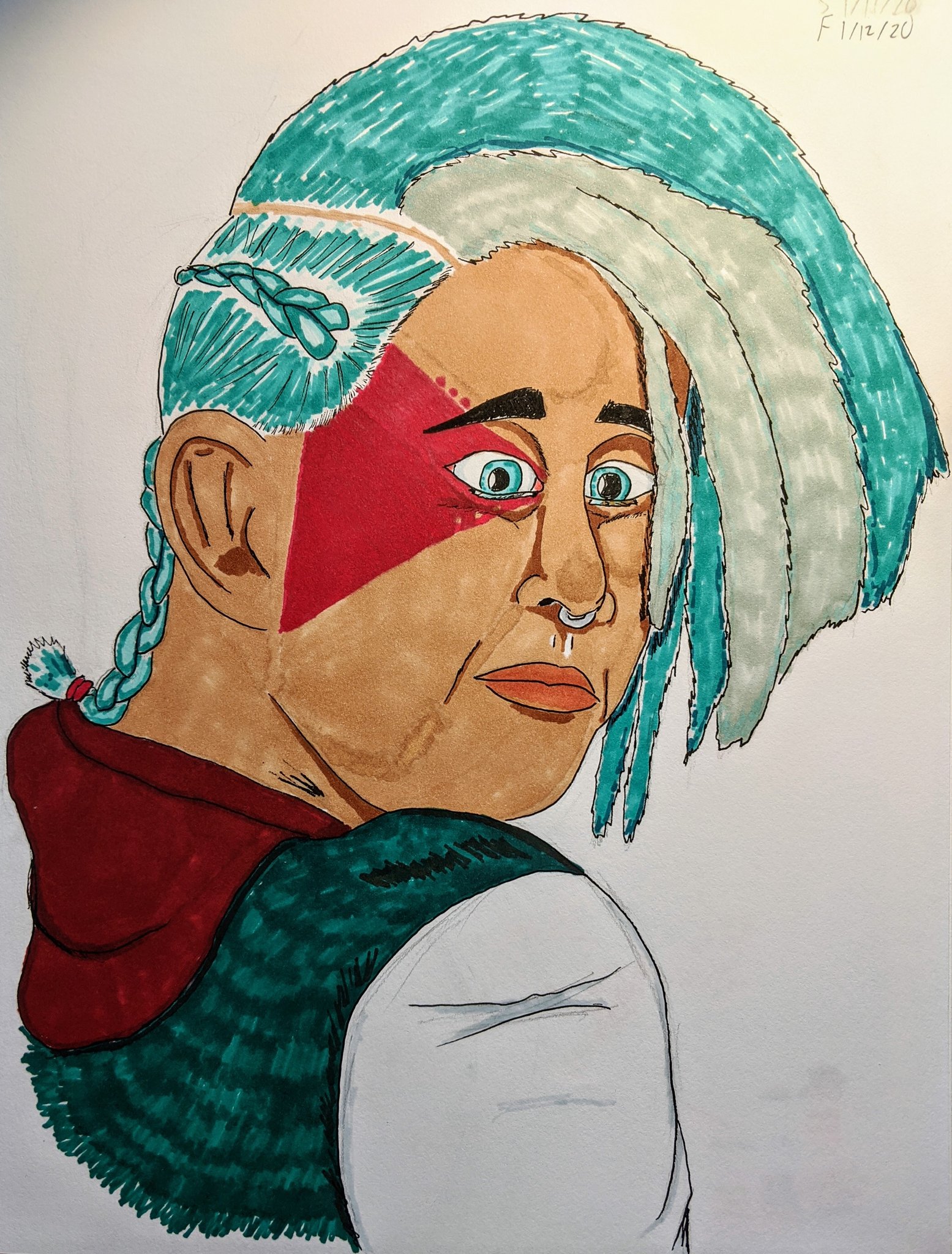 The more I look at this one the more I see problems with it.  There are still a lot of quirks to coloring with markers that I haven’t adapted to, and it’s especially obvious here where I made mistakes.  I was experimenting some with how to draw eyes here, and while I liked the effect okay before it was colored, now it looks really off.  I’m constantly having to relearn that every line on a comics-styled face ages it dramatically.  That’s pretty clear here.  Also, I think this was the picture I did in the last few weeks that made me realize I am fascinated with drawing hoods, but I have no idea how to proportion them so they look right in comparison to a figure’s head. 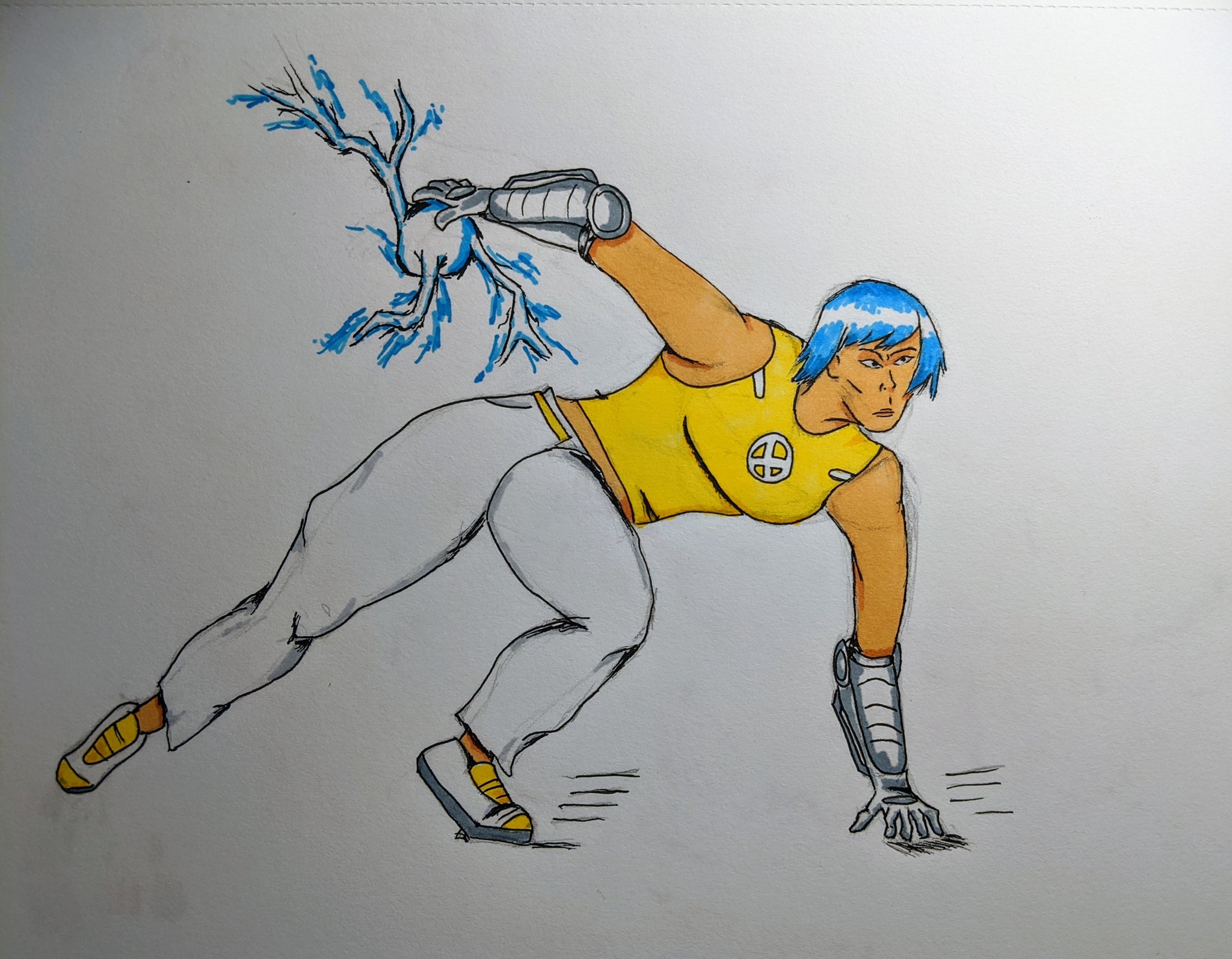 I am obsessed with making my full-body figures look dynamic, and I was pretty proud of how this one turned out.  There are some elements in the execution that I don’t love (that back foot swinging around looks rough in comparison with the rest of the legs, and the shoulder on the forward arm looks dislocated to me), but overall I think it’s a good piece.  I am very gradually learning how to use speed lines to imply motion. 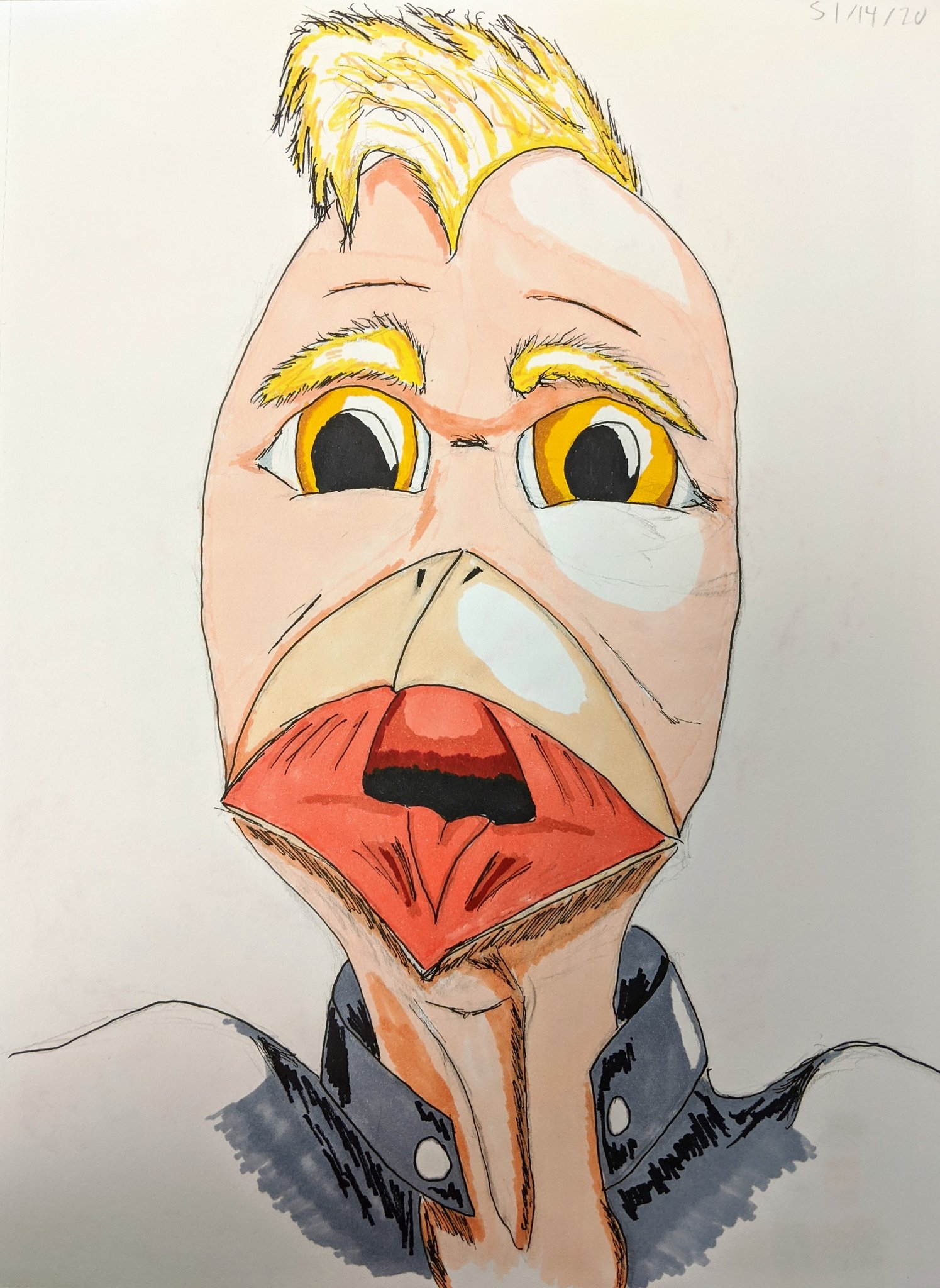 This portrait was a lot of fun for a couple different reasons.  The first one is that because the character is a humanoid chicken, I didn’t feel as much pressure to avoid shy away from extra detailing.  He’s supposed to look a little grotesque, which is actually a very freeing effect to go for.  Also, because he has a beak instead of a fully functional primate mouth, I was forced to think through how the eyes and eyebrows should work together to communicate emotion.  I wanted him to look happy, and I think I fell short on that; he seems more surprised than anything (chickens always look surprised though).  Fuzzy eyebrows were a fun detail. 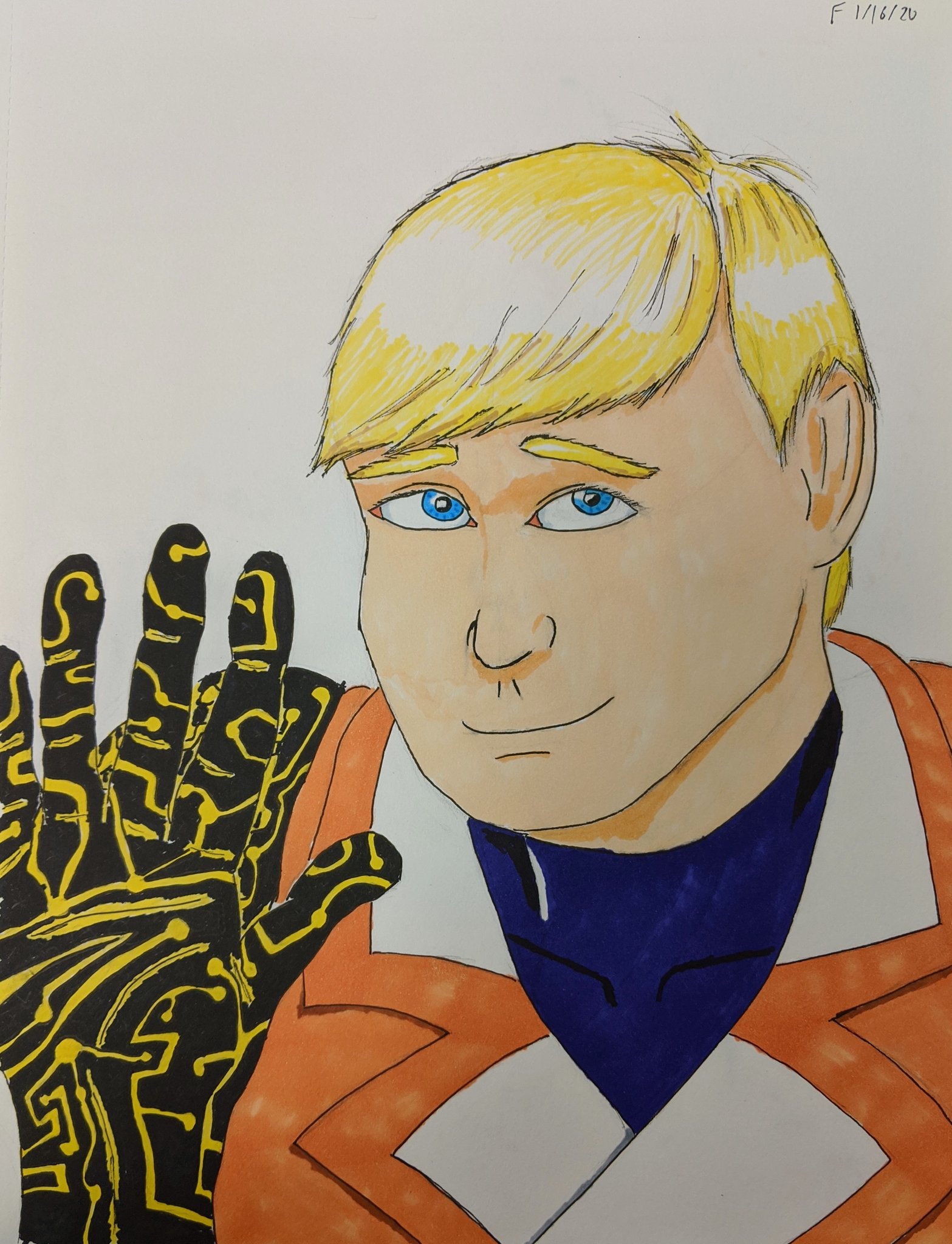 There is so much junk on the hand in the drawing; I hated doing it.  On the flip side, I like the effect and I feel like the texture of the bits on the hand do a good job of giving it a sense of volume despite the two-tone coloring.  The face came out great; that slight raise of the eyebrow like he’s a little embarrassed to be noticed is delightful. 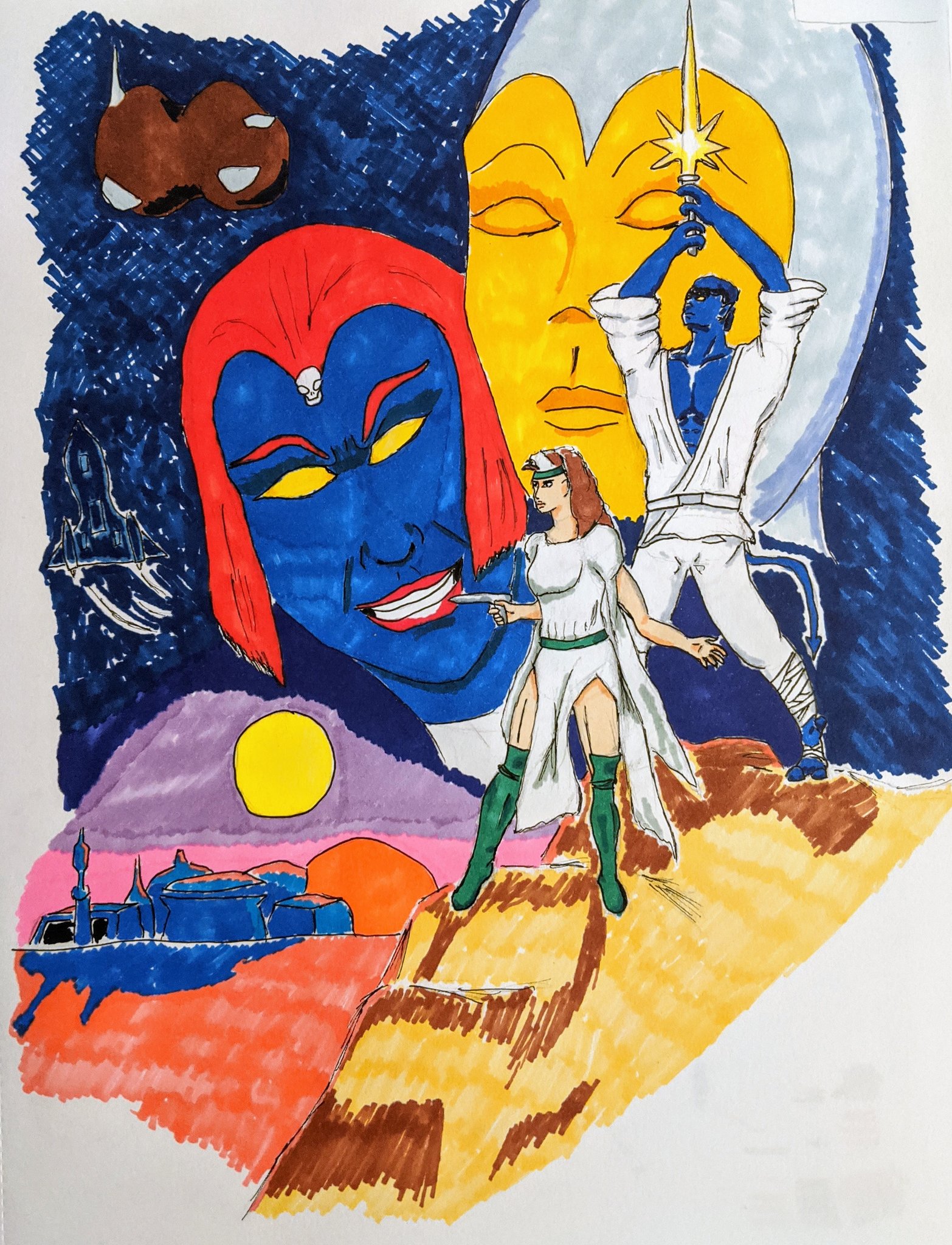 It’s a Star Wars pastiche with X-Men characters.  I don’t feel like explaining it.  The coloring took three days of work off and on, and in the end it came out pretty decent.  I’m eventually going to have to learn a lot more about how color schemes work so I can simulate different kinds of light.  The clash between the sunset tones of the background city and the foreground characters being in apparently white light bothers me now that it’s finished.  Part of that was lack of planning, but it was mostly just my limited understanding of how to use colors. 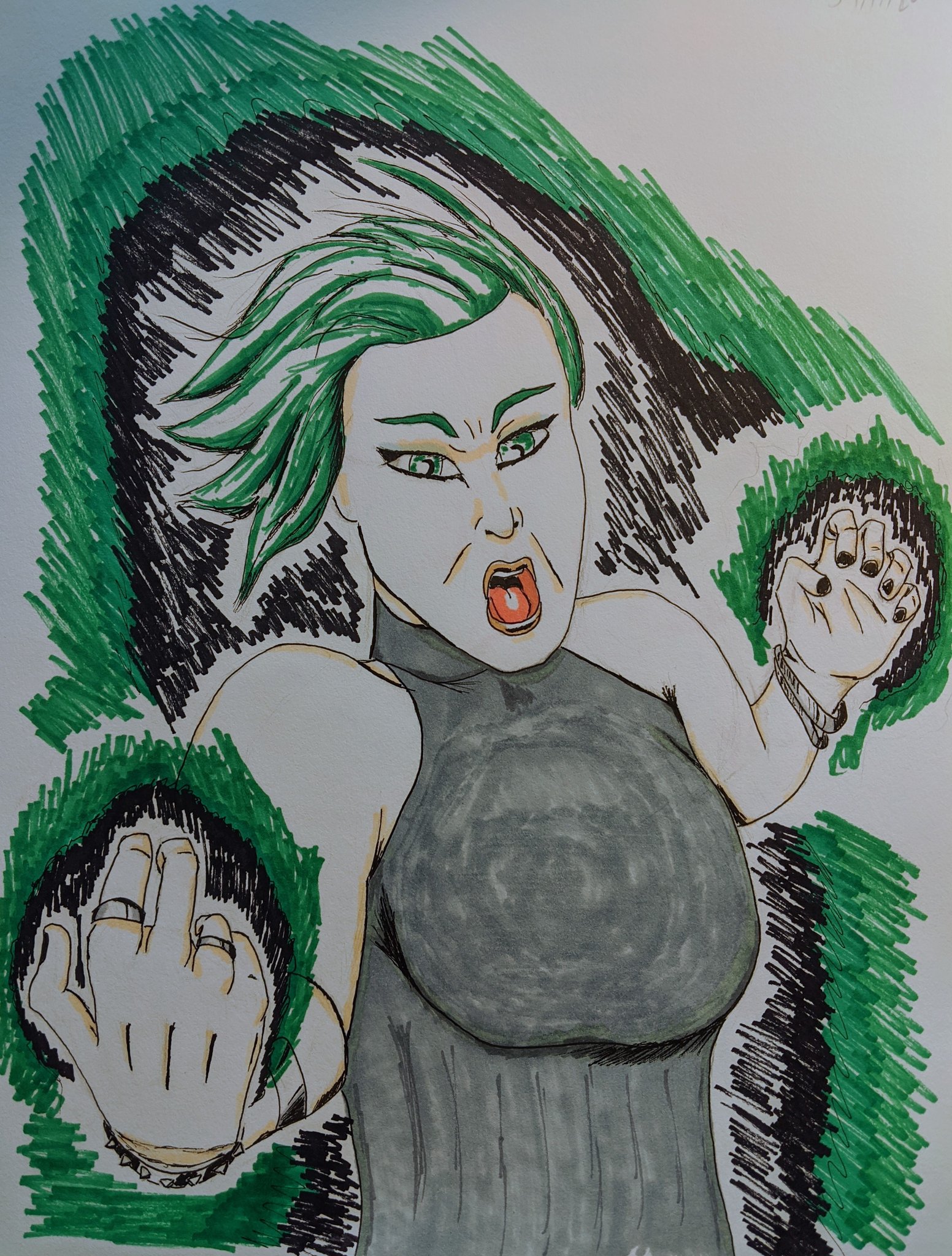 This one was a ton of fun to draw, even if I did have to redo each hand two or three times to get their proportions with the rest of the body right.  I particularly like the way the hair turned out here.  The face is pretty good, but I think the mouth should have been slightly bigger, and I should have reduced the size of the shine on the pupils a lot.  As it is, there’s a magical girl vibe to the face that doesn’t really mesh with the rest of the body. 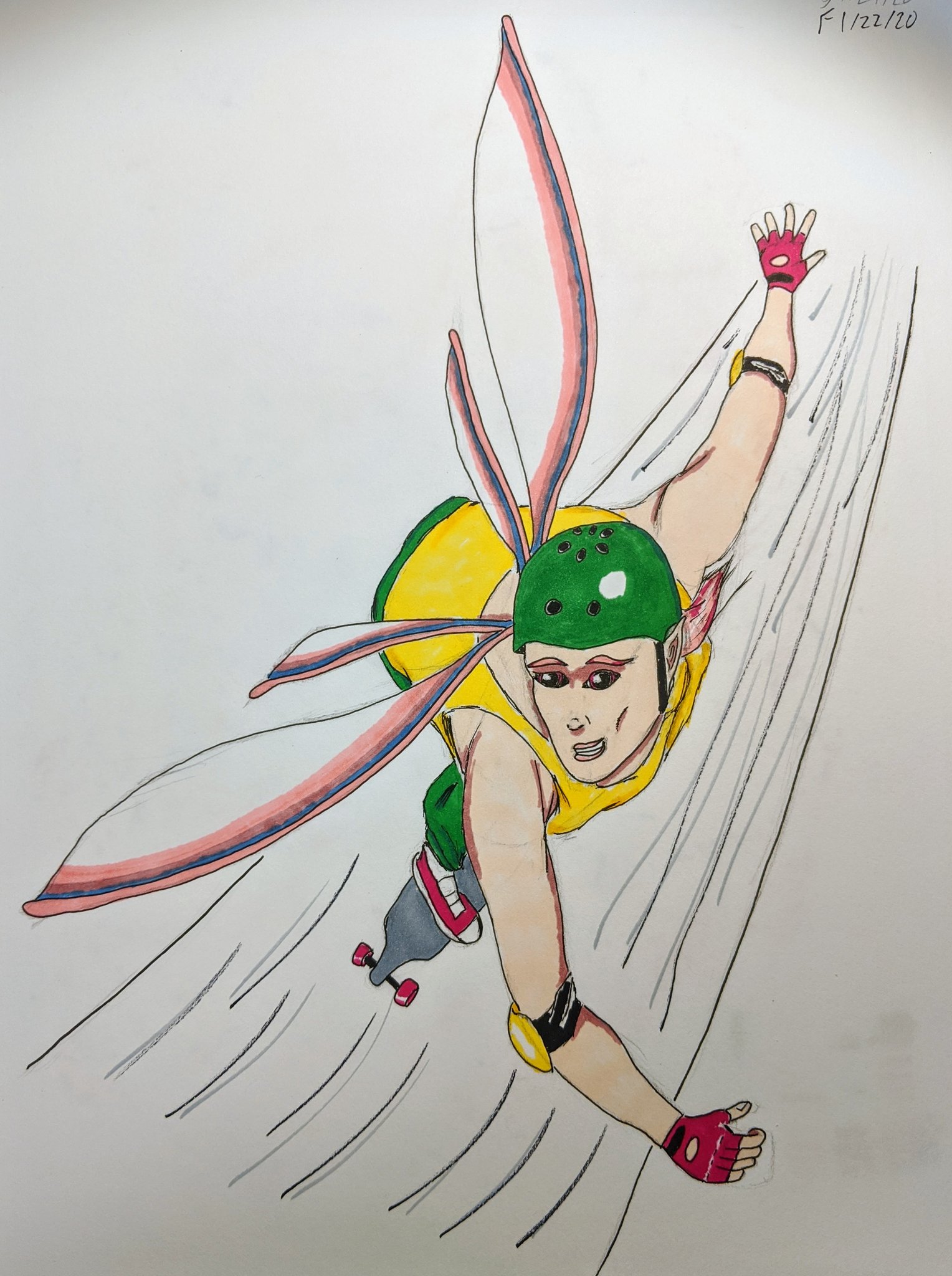 I’m going to brag on myself for a moment here (because sometimes it’s good to acknowledge what you do well) and say that I am getting pretty good at visualizing interesting poses.  It’s all covered up in the finished drawing, but I spent a fair bit of time puzzling out the placement of the legs to make sure I knew how the entire figure would fit together.  This whole drawing probably took significantly less time than some of the other ones I’ve done in the last couple weeks, but it feels like a way more interesting piece of art.  I’m a little bugged that I didn’t account for drag when I drew the wings though; it makes no sense that they’d be extended that way. 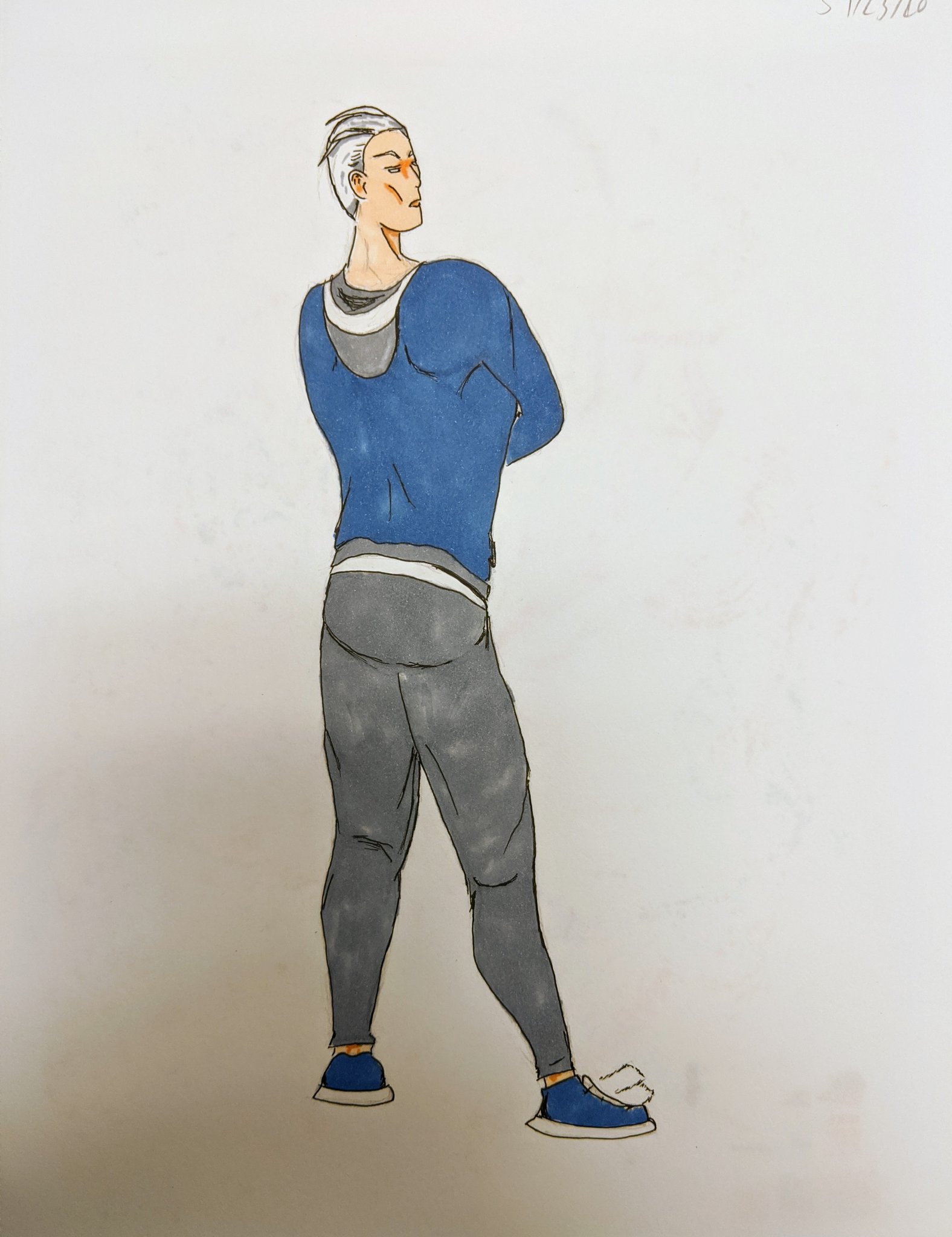 This doodle came together in about an hour from concept to final colors.  It was really fast work.  The proportions are a little weird (I have a tendency to over extend torsos when I’m working on a flat surface because my perspective squishes the image slightly).  I am weirdly proud of the way the sweat pants look though.  I’ve been trying to figure out how you give texture to non-fitted clothing for a while, and I finally had some success here.  The weirdly shaped hoodie makes another appearance here as well.