The last month has been exhausting.  At work, it’s felt like I’ve been skipping from one crisis to the next, and while all external indicators suggest that I’ve been handling things as well as can be expected, it’s definitely left me feeling pretty wrung out.  I’ve noticed the stress mostly in the ways that I’ve been disinterested in my usual creative hobbies.  What I thought was going to be a month off from blogging turned into two months (maybe more; even as I’ve been percolating this post I’ve been unsure if there’s anything else I want to record at the moment), and after a relatively intense bout of drawing practice I’ve slowed down considerably.  I’ve lacked bandwidth to do much with my leisure time besides reading and watching TV (and I’ve read and watched some good stuff lately), but the usual drive to sort my thoughts out and put them somewhere other than my head hasn’t been there.  Even now that I’ve sat down to collect myself, it’s a struggle to figure out where all this is going.  It’s like the usual font of opinions has turned into little more than a shapeless burble.  There’s more impulse than plan at work in this update.

In the midst of the work exhaustion, I’ve found myself coping with a general feeling of grumpiness about things outside my immediate sphere.  The news is bad, and the parts of Twitter that I pay attention to vacillate between two extreme poles of mania and anxiety over things that I can’t bring myself to care deeply about.  I know that stories matter, and everyone needs to be able to see themselves in the stories they consume, but I feel a profound lack of patience with the roller coaster of emotions that others experience quite loudly in their online presences.  Maybe my reticence has been not just about mental exhaustion but also a sense that it’s patently ridiculous to shout into a void that’s made up of everyone else’s cries for validation.  I don’t think I can rightly call it a feeling of depression; I just feel irritated by the anxieties of the larger world.

When I was a few years younger, I think I would have found that general expression of irritation at others’ anxieties alarming simply due to a fear that it signals chronic empathy fatigue.  Education work demands a lot of emotional labor, and the professional burnout that can ensue from being asked to care about others so much is a real concern.  I suspect that I used to have a rather inflexible feature of my worldview which treated empathy as a static thing.  Whatever empathy you had existed on a spectrum, and how often and strongly it manifested in your decision-making process wasn’t something that changed much.  I think about that now and realize it’s a terribly flawed model, especially for someone who’s been working in education for nearly a decade.  More broadly, I also see that it’s a mean model.  When you think that people cannot become more empathetic, you surrender the hope that they can be persuaded to care about more and greater things.  Now I think I am inclined to consider that we are all just in various states of exhaustion.  Some folks externalize their exhaustion, insisting on letting others know about their need regardless of the bond they may or may not have with one another; others turn inward and shut themselves away even from folks who want and need to hear from them.

Empathetic meditations aside, I’ve been thinking more about my relationship with various online spaces, and I’m turning ever more cynical about the value of social media in general.  The biggest platforms reward the worst kind of antisocial behavior, and I have no patience for it.  I just want space to share the things I like, and I am bad at asking for attention.  Also I’m tired, but that’s probably more cyclical than anything.

Anyway, here’s a thing I drew; I think it turned out pretty well.

Well, that was a digression.

Setting aside all the stuff about the imagined malice of the year and the actual malice of people who are scared of their fading grasp on the world, I should offer some reflections on the year as it relates to my personal life.  The list of major events in my private life this year is a short one.  I left my job at the special education school where I worked for five years and began a new one at a regular high school.  My grandmother died.  I had a fight with my parents over taking some time to lick my wounds after the election, and then we reconciled.  It’s a mixed bag.  On the balance, I think that I’ve spent more days feeling generally happier this year thanks in large part to my new job.  At the same time, I’ve also had some extended periods where I think I was coping with low-level depression (summer was a particular low point; the combination of processing grief while being on an extended break from work is a potent one, especially when I filled so much of my time with news of the wider world’s troubles).  If my world were small enough to only encompass my friends and family, then I’d say that 2016 was not the worst year I’ve ever had.  The problem is that 2016 is also the year where so many white liberals like myself were also forced to confront just how fragile our carefully cultivated view of the world is.  To remain innocent is to remain ignorant, and there comes a point where you have to accept that trying to hold on to innocence for yourself is an act of violence towards people who need you to see their suffering.  That’s probably the big lesson I’ve learned from this year. 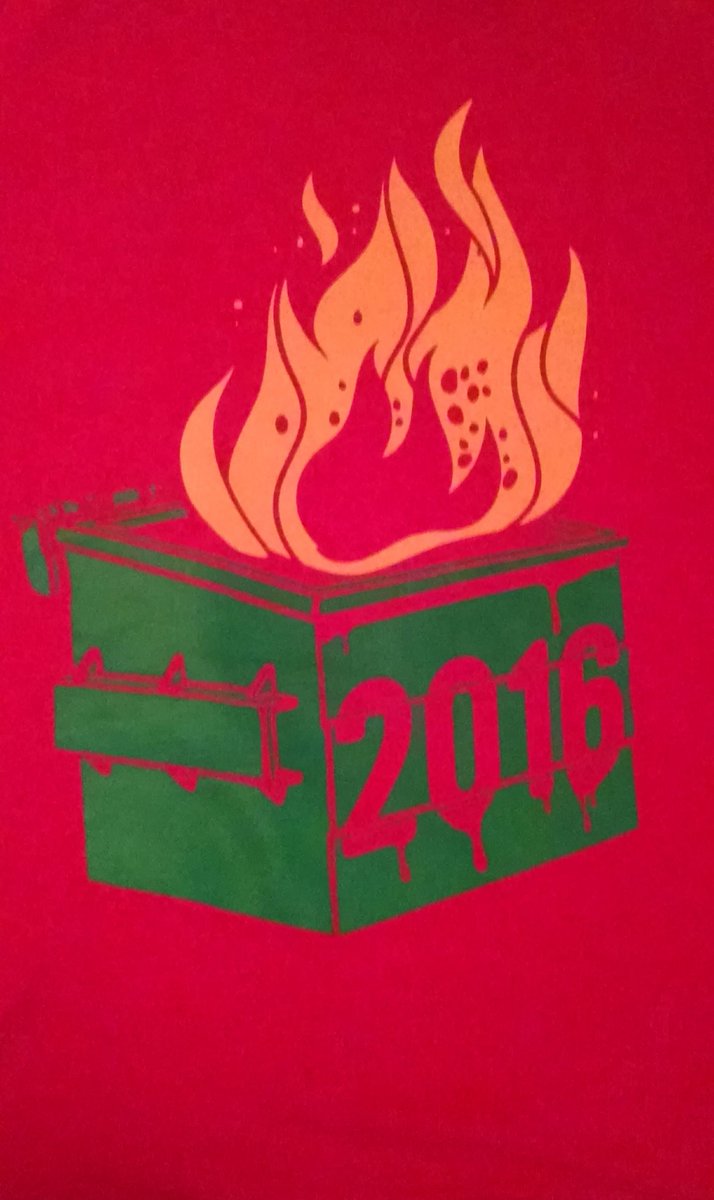 On the blog, things have been generally good.  At the time of this writing, these are my top five most viewed posts of the year:

A fun side activity to look at as well is the variety of search terms that brought folks to my blog this year.  To those people who ended up on my little feminist blog looking for how to draw erotic superheroines, teenage girl simulators, and Nagate/gauna fanfic sex, sorry?  I mean, I get that you had to have been disappointed that you went looking for porn and ended up on a page with nothing but commentary about how terrible various depictions of women and intersex persons are.  Probably you just clicked away after you realized this was not what you wanted, but I hope you spent a moment reading my thoughts, and that you went away a little more enlightened in your quest for self love.  To all the people who searched for some version of Final Fantasy being either pro- or anti-religion (and that one special person who searched “final fantasy is anti christ”), I guess I have to say congratulations?  Those are, in fact, things that I discussed in this space in the past; thanks to you, it continues to be my most viewed topic.  To all the folks who continuously land here after searching for ideas on some catchy title to go with a particular topic, I offer my sincerest apologies.  I’m no good with titles either (you probably already figured that out though).  I want to give a special shoutout to the person who searched “catchy message titles for ten commandments”; I don’t know what post you landed on, but I suspect it was very far from what you wanted.

In terms of overall traffic, I’m closing out the year with nearly a thousand more total views than I had at the end of 2015.  My blog’s a low-traffic affair, so this difference comes mostly from a couple of special events that happened this year, including “This is not a Deconversion Story” and its follow-up posts, the death of Jack Chick (which precipitated a bit of renewed interest in my old posts discussing the theology of various Chick tracts), and now the first part of my 2016 reflection (many thanks to Rachael for boosting that one).  I often find myself playing the game of wondering what my traffic would look like without these unique events, but I suppose that falls into speculation about things that didn’t come to pass, and, well, that’s not a terribly productive use of time, is it?

Outside the blog, I’ve begun branching out and trying to build more of a presence on Twitter.  It’s hard; I still don’t fully understand the platform’s etiquette, and I’m regularly intimidated by the prospect of tweeting at folks who don’t know me.  We’ll see how I can improve on that in the coming year (as I’m writing this, my phone is blowing up with new Twitter follows; thanks again, Rachael).

And that’s my year in a nutshell.  How was everyone else’s?

Two things have happened since I officially started summer break on Tuesday.

The first thing is something that Rachael and I have been meaning to do for months, but had been putting off until we were both on break and had time to do all the research that we like to do when we’re facing a major purchasing decision.

This is a big step, taken with much trepidation, seeing as we’ve been dedicated flip phone users for pretty much our entire adult lives, but we decided that we finally reached the tipping point.  Rachael has a lot of responsibilities that she has to juggle, and convenient internet access goes a long way in helping her manage that; I just got tired of my old phone (it’s so old the plastic casing has begun to crack) and wanted to upgrade to a plan that would let me actually participate in texting, the preferred method of communication for my circle of friends.

We’re pretty happy with our choice, and the last twenty-four hours have been spent learning how to operate these fancy new devices that will inevitably become the chains by which we hang ourselves from the gallows of contemporary society.

In other news, we went to IKEA today, and it was a delightful day trip filled with meatballs and the realization that Rachael’s laptop stand Dave has been discontinued in favor of a new, non-swivelly version known a Svartesen.  Dave was overdue for replacement, as some of the parts in the neck swivel had gotten stripped, but we are saddened to see it leaving the house.  Svartesen looks to be a good replacement, but it’s no Dave.

We will miss you, Dave the laptop stand.

In other news, I’m furiously trying to finish playing through another old RPG at the moment, and I’m hoping to have it done so I can do a write up on the experience next week.  I figured this game would be a little thin for an extended blog series, and now that I’m over 50 hours in with most of my playtime from the last few days devoted to the very slow grind that is working through the final dungeon, I think it was a good decision.